Top overall performers at the 2019 HoopSeen Best of the South, part IV 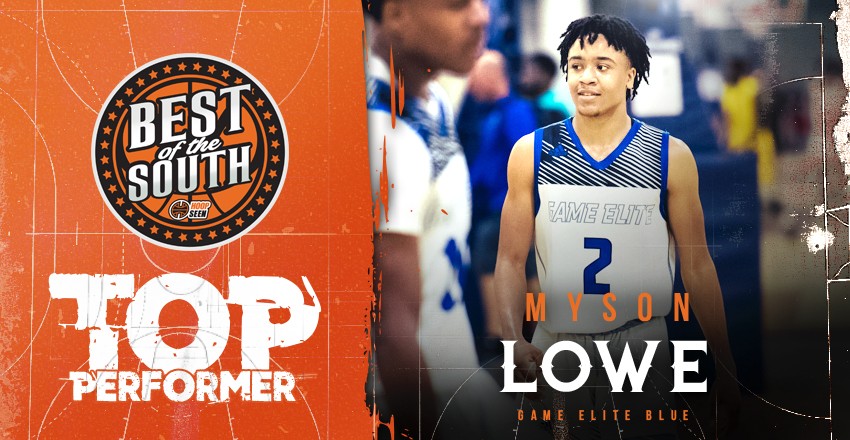 The 2019 Best of the South was trending during the NCAA Live Period. With over 325 teams from 31 different states represented, the Georgia World Congress Center was the place to be for independent teams this summer. Who stood out? Our staff saw thousands of players, hundreds of games, and hundreds of teams. Meet our fourth round of top performers from the stage of the summer.

The North Carolina bred big man showed flashes this week of why he is being recruited at the mid-major level. His footwork and overall skill set in the post was at that level every game. He scored with either hand on the block and he altered shots. What stands out with Holt are his big hands and wide shoulders that he uses to his advantage to receive entry passes and grab a lot of rebounds.- Justin Byerly

The speedy point guard from metro Atlanta had himself a week. The sub-six-footer played big on a big stage. He was one of the top scorers in the loaded 17U division. Lowe’s three-point shot was a weapon at the Best of the South.  Lowe can get to the foul line, be pesky on defense and be a threat from the wing as an attacker. .He averaged three made three-pointers a game. He’s maximized summer stages this year and has now seen his recruitment take a big jump. With Terrell Burden now graduated from Campbell, Lowe looks to fill the shoes of the current Kennesaw State freshman. - Justin Young

After the first day of action, the 6-foot-7 was sitting in a wheelchair with an ice bag on his foot in the lobby of Hall B of the Georgia World Congress Center. It didn’t look good for the productive post player for the All-Stars. But Sanchez showed some toughness and went right to work again, despite the bum wheel. He wasn’t going to sit out the NCAA Live Period. Sanchez showed some serious toughness with his play. He’s been consistently good this travel season and has improved as much as any big man from the Peach State. He should be a priority prospect for a number of good low-majors after his final showing with always-good All-Stars. - Justin Young

I am a big fan of toughness on the court. I think the prospects that have the toughness attribute can affect a program beyond just on the court. Logan West, a 6-foot-5 undersized forward is that player. He is a junkyard dog that bullies his way to buckets and rebounds. His muscular frame and size allows him to spend a lot of time in the paint. You are not going to back him down, you are not going to plow through him. He is like hitting a wall if you try to go at him. That is something if I was a college coach I would want and I think those in the profession this week witnessed what West can bring at the next level. - Justin Byerly

The future Belmont Bruin came to his final HoopSeen event of the season on a mission. The speedy guard from Tennessee and the rest of his Team WHBH teammates played better in July than they did back in the spring. And that’s saying something because they were pretty darn good back in the spring. For Belmont, the staff was smart to get Wood locked up and keep him in state before the July recruiting period came around. Wood was one of the best point guards in the field and played like a guard ready to compete for a role in the always-talented Belmont lineup. Wood was solid all around at his final Best of the South. - Justin Young