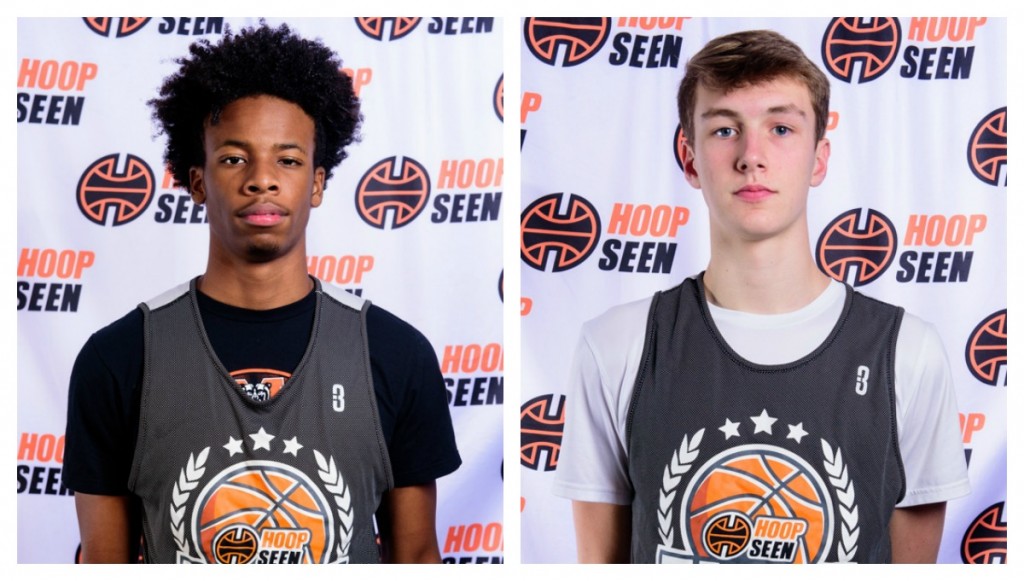 We had a full camp on Sunday for the 2018 Georgia Fall Preview. Each team was balanced with talent, size and grade levels. We begin our team by team evaluations today. Meet Team 5.

Rodney Allen, SG, 6-3, Eagle’s Landing, 2020 (pictured left): He plays with the gas pedal all the way to the floor and loves to play aggressively. He finished at the rim and drove hard to the rim. Allen is a nice passer and moved the ball around effectively.

Corey Astin, CG, 5-6, Fayette County, 2020: The small guard liked to run and play an up-tempo style. He’s looking to score and get the ball to his athletic teammates.

Mason Bierster, SF, 6-5, Horizon Christian, 2019: The long wing was a nice prospect to watch at the Fall Preview. He hits his open shots and displayed a nice pull-up jumper on his three-pointer. Bierster is a sneaky scorer and could be a nice steal for a program looking for a perimeter threat with size. For the second year in a row, Bierster drew nice reviews from the Fall Preview camp.

Jarrius Burnett, SG, 6-3, Warren County, 2020: When he found himself open in the open floor, Burnett was knocking down the open three-pointer.

Luke Champion, SG/SF, 6-7, Lambert, 2020 (pictured right): One of the more versatile players in the camp, Champion caught our attention with his size on the wing and his textbook jumper from the wing. His pull-up three-pointer in transition was a nice thing to see. Champion is a match-up problem inside and out. Ultimately, his value is best measured by his perimeter weaponry as a shooter. He’s a good one at that.

Alex Kelehear, PG, 6-1, Lafayette, 2019: The point guard was one of our top performers at the 2018 Georgia Fall Preview. He’s a simple and effective floor general that shared the wealth throughout the day. Read more about his day HERE.

Elwood Moore, CG, 6-2, Lakeside, 2020: When the opportunity presented itself, he made the shots he was involved in. Liked the energy that he brought when he was in the drill work.

London Riley, SG, 6-3, Discovery, 2020: The scoring guard was one of the nice risers from the camp, owning the stage that was presented to him. His jumper was the thing that set him apart from the rest of the pack. He has a sneaky bounce to his game and that allowed him to make some noise at the rim. Riley was one of our top sleepers from the event.

Tay Watson, F, 6-6, Newnan, 2019: The high-energy senior was an easy pick as one of our top performers from the Georgia Fall Preview. He shined throughout the day. Read more about his performance HERE.

Dylan White, SG, 6-1, Sequoyah, 2022: We liked the way competed throughout the camp. He was always moving throughout the offense and looked for spots to make an impact.