2018 Bob Gibbons Tournament of Champions 16U top performers, part I 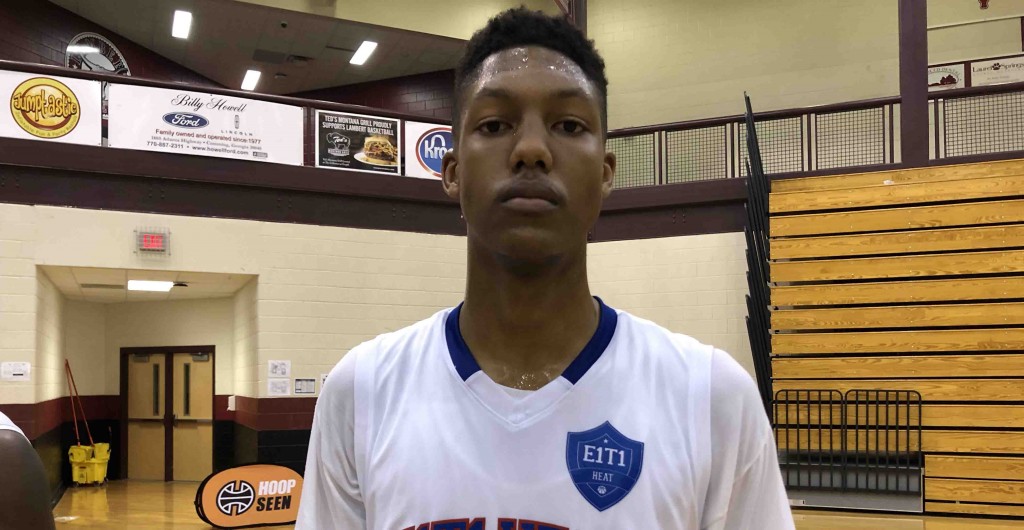 Kalib Clinton, BCB, 2020 SF: Sleeper alert. Clinton was Mr. Everything for BCB. He’s about 6’4” and projects as a playmaking wing. His ability to make difficult plays against top-level competition was eye-opening. Clinton is another guy outside the metro Atlanta area that needs to be tracked. - Kory Keys

Isaiah Elmore, E1T1 Heat, 2020 PF (pictured): If Bretner Mutombo was the best time protector in the 16U division, Isaiah Elmore wasn’t far behind. He anchored his team’s back line and altered a bevy of shots at the rim. Much of that was due to his activity level. If a shot went up, he was around the rim. He’s long and athletic and flashes a bit of a game off the bounce. He’ll be an interesting prospect to track going forward. - Kory Keys

AJ Smith, Team Charlotte, 2021 CG: Smith was the lead guard all weekend for Team Charlotte. He got it done off the bounce and from the perimeter. I think he projects as a combo guard at the next level with good strength and athleticism. He fits the mold of successful Team Charlotte guard that has had success at the highest level over the years. - Kory Keys

Deivon Smith, Celtics, 2020 PG: Athlete, athlete, athlete. His leaping ability, at his size, is elite. And on its own, that’s great. But Smith showed a strong pull-up game to go along with that explosive athleticism. He was a key member of the Celtics terrific run at the TOC. Smith drew a crowd of onlookers every time he stepped onto the court. He’s a guy I’d project to breakout in Georgia this upcoming high school season. - Kory Keys

Brinton "BJ" Wright, Middle Georgia Ballers, 2021 F: Wright was playing up in the tough 16U division and proved he belonged. At 6-8, he has the size and reach to get the job done near the basket. His play away from the basket is what got my attention. He is really fast at getting the ball up the court and handles it very well in the half court setting. He has some nice moves that help him get the first step on the defender. He has a really nice touch from outside too. He knocked several triples down on the weekend. Wright also plays well above the rim. He had several highlight reel dunks. The Perry, GA resident has some work to do on his game over the next several years but has potential to be a high major stud. - Jeff Roberts

Christian Wright, Georgia Stars, 2020 G: Such a fun player to watch compete. He's a three-level scorer who plays with power. Cut from the mold of Kyle Lowery, Wright bullied his way around the floor and challenged defenders to slow him down. If he wasn't drilling a three-pointer, he was scored at the foul line. Wright was the pilot to a championship run over the weekend. He's had a very good spring showing on the travel circuit. - Justin Young