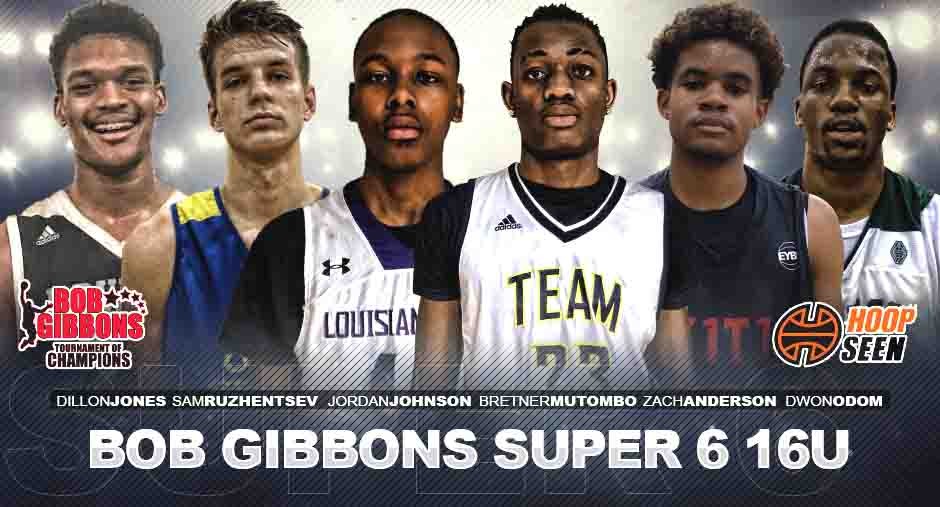 The 16 and under division of the 2018 Bob Gibbons Tournament of Champions was jam-packed with talent. This half dozen group of players stood out as our Super Six from the tournament.

Zach Anderson, E1T1, 2020 SF: The main thing I noticed about Anderson’s game was how he was always around the ball. At 6’6”, he showed a knack for rebounding out of area as well as getting teammates involved with his ability to distribute from the high-post. Anderson also did a good job finishing through contact around the rim. He’s another whose game is progressing towards the college level. - Kory Keys

Jordan Johnson, Louisiana Elite, 2020 F: He is a rangy 6’7” that fits in well with a really good Louisiana Elite squad. His agility and athleticism are what stand out at this point. He flashed those skills on the glass and by finishing in traffic at the rim. His team is incredibly balanced and fought their way to the title game. Individually speaking, he won the match-ups in front of him throughout the weekend. - Kory Keys

Dillon Jones, Upward Stars Southeast 16U, 2020 F: The Upward Stars Southeast team went 5-0 and won the 16U Black Championship with the help of Jones. The 6-6 combo guard has the look of a power forward with his bullish 225 pound frame. He is quick and agile on his feet in the open court. He is really good with the ball in his hands when setting teammates up for open shots. He uses his bulky frame to around the lane for rebounds and baskets. He will be an asset on the next level with his D1 ready size. - Jeff Roberts

Bretner Mutombo, Team Tuff, 2021 C: Mutombo might have been the most impressive player I saw at the 16U level. But get this: he’s just a freshman. His length and agility are advanced for his age, but he also flashed a face-up game. There’s plenty of reason to understand why he’s a high-major big. Just like the Atlanta Jam, Mutombo was the best shot-blocker in the event. — Kory Keys

Dwon Odom, Atlanta Celtics, 2020 G: Odom is what a lead guard looks like in the 16U division. His strength and athleticism allow him to get to the rim off the bounce and finish through contact. If he’s able to become a more consistent jump shooter, the sky’s the limit. No one was better than him when it came to attacking the rim and shining in transition. - Kory Keys

Sam Ruzhentsev, Georgia Stars, 2020 F: The 6-foot-5 guard is a long, versatile prospect. He's the type of kid that projects as a mobile, stretch-4 type at the next level. His size and skill level are really effective for an athletic Georgia Stars squad. He has enough guard skills to play on the wing right now, but I wouldn't be surprised to see him be a combo 3/4 in college. I'd expect his recruitment to pick up going forward. - Kory Keys