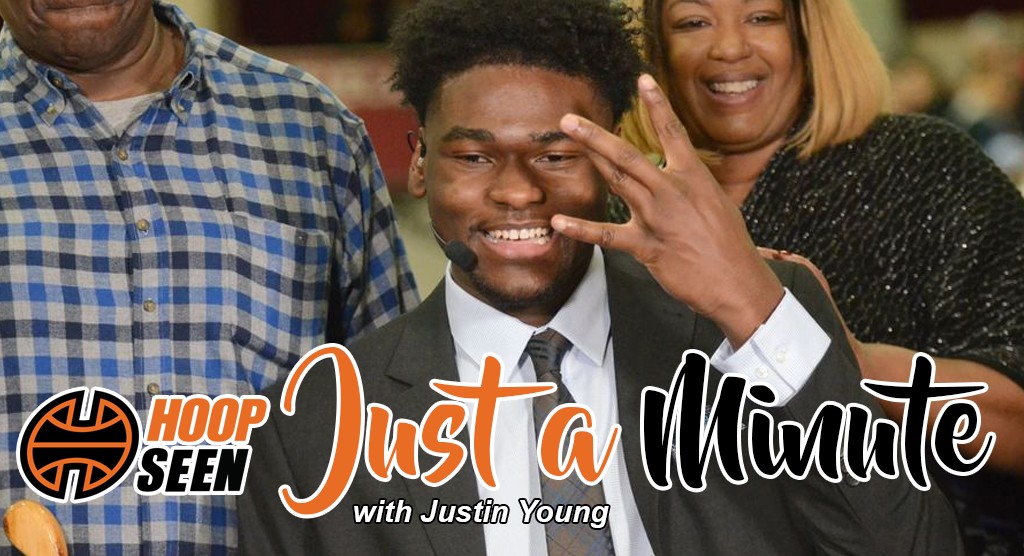 In this week’s Just a Minute, I take a look at the Pac-12 and the upgrade in talent coming to the West Coast, a sleeper in the junior college ranks and the next wave of talent in the state of South Carolina.

The Pac-12 is not very good this season. if you watch the games, take a peek at the nightly scoreboard just open up Twitter, you’ll understand this pretty quickly.

The league has talent. Of course it does. It should.

But does it have star power? Not really. But the Pac-12 will next year.

Upstate New Yorker Isaiah Stewart of La Lumiere (IN) announced his decision to attend Washington on a live broadcast at the HoopHall Classic at the Basketball Hall of Fame on Sunday night. As the Patriots and Chiefs were trading punches in the AFC Championship game, Stewart sat at an ESPN desk and announced his decision.

The ultra-competitive big man threw up a “W” with his hand as his family flanked his big shoulders.

Stewart was one of the stars at the USA Basketball camp in the fall. He was one of the top overall players in the EYBL over the last couple of years. He’s a throwback big man who never turns off the switch. Washington head coach Mike Hopkins went back to his upstate New York roots and snagged the biggest geographical steal of the 2019 class.

The Huskies have been a NBA factory over the last 15 years, thanks in large part to the recruiting efforts of Lorenzo Romar. Marquese Chriss, Markelle Fultz, Justin Holiday, Dejounte Murray, Quincy Pondexter, Terrence Ross and Isaiah Thomas are former Huskies currently in the NBA. With Stewart on hand, Hopkins will now hope to continue the trend of landing NBA caliber talent in Seattle.

The league overall has a nice new wave of talent coming to the West Coast.

Arizona has a commitment from No. 11 overall Josh Green, who starred for IMG on ESPN in their win over Oak Hill Academy at the HoopHall Classic in Springfield, Mass.

Florida big man CJ Walker (No. 16) is headed to Oregon while No. 17 Nico Mannion is Arizona-bound. Isaiah Mobley, our No. 25 overall player, has signed with USC. So has No. 34 Onyeka Okongwu. Zeke Nnaji, our No. 36 overall player in our 2019 rankings, is part of the terrific Arizona class. USC has No. 56 Max Agbonkpolo locked up. Oregon has No. 59 Isaac Johnson locked up, too.

Seattle area star Jaden McDaniels, the No. 5 overall player in the class of 2019, is obviously a hot target for UDub. Kentucky, San Diego State, Texas and UCLA are also firmly in the race for one of the most versatile amateurs in the country.

The race for Oak Hill Academy guard Cole Anthony could be a battle between North Carolina and Oregon, too.

I would be a little surprised if McDaniels picked the Huskies and if Anthony picked Oregon. Then again, I was surprised when Zion Williamson picked Duke.

We updated our 2019 and 2020 rankings for the state of South Carolina. We only rank who we’ve seen in person or watched multiple games on video.

Tai Young did a nice breakdown of the 2019 players.

We only ranked 10 players in South Carolina (because that’s the most comfortable we felt about the group up to this point). Dorman big man PJ Hall sits at the very top of the rankings. He’s been a stellar player at our events (HoopSeen Tip-Off, Bob Gibbons and our Preview camp).

BLAST FROM THE PAST IS POURING IN THE POINTS

Demarkus Lampley, an honors student and sophomore guard at Wallace State, is having a monster year at the junior college level.

This isn’t all that surprising considering what he did on the travel circuit with the Georgia Kings at our events. Since he was a 15U competitor, Lampley was a no-brainer All-Tournament selection at some of the biggest events in the country.

His game has only grown since he’s moved on to the college level.

Lampley holds offers from Portland and Robert Morris while he’s had calls from Louisiana Tech, Ole Miss, Nebraska and Mercer. The 6-foot-2 guard could be one of the biggest names as we march closer to the spring signing period.

THE BIG STAGE IS COMING

We all watched the magic on Sunday. The NFL doesn’t disappoint and greatness, and the stripes, rose to the top of the conversation. The New England Patriots and Los Angeles Rams will take over Atlanta for the Super Bowl in two weeks.

Across the street from the majestic Mercedes Benz Stadium is the Georgia World Congress Center, home of the 2019 Best of the South. The city is alive right now as we prepare for the biggest sporting event in American sports comes to town.

It is hard to not get excited about our July basketball tournament during the all-too-important NCAA Live Period.

There is a unique energy in this area. Our HoopSeen team spent a day amongst the energy last week as we had a meeting, preparing for our big summer stage. I’ve been in the grassroots basketball business for two decades. I’ve been to some things, now. Really cool things. Really unique things. Really big things.

But I’ve never been to something quite like what we are going to do.

As the sports world makes its way to the Peach State, I can’t help but get excited for what’s on the horizon for grassroots basketball. We’ve invested in your programs, your teams, your players, your families and your futures. With 35 courts under one roof, college coaches will take advantage of the one-stop shop this summer all the while everyone will enjoy a stage that is being set up right now with the Super Bowl.

Honestly, how cool is that?