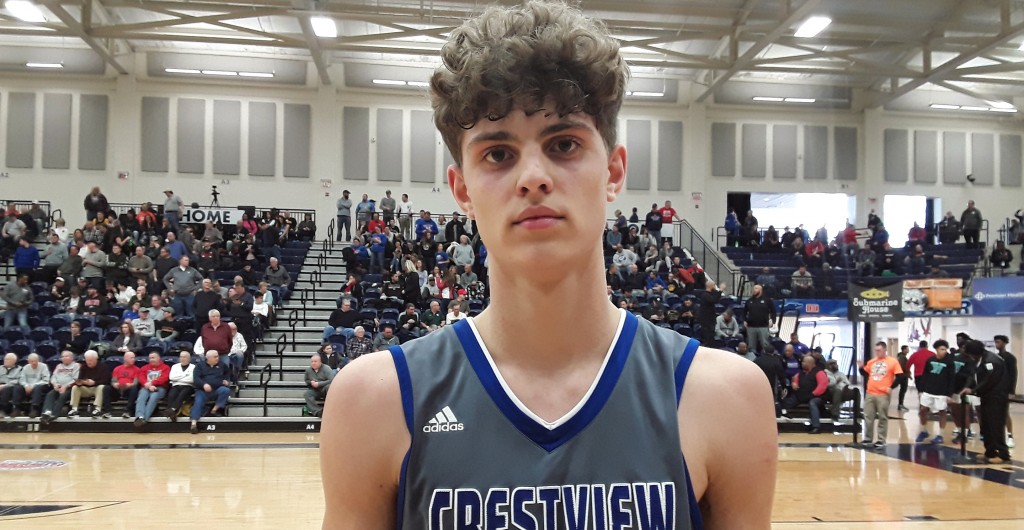 Dayton, Ohio - While this years Flyin to the Hoop was stocked full on talent that's already committed to their respective four year schools, some of the states best underclassmen also made sure to rise to the occassion. One player that particularly stood out was that of Crestview forward Kalen Etzler. Despite how talented Etzler is, as a sophomore he had to figure out his niche within a well oiled team.

"In the beginning of the year I had to really find where I fit in because I didn't really play much last year. But this summer I played with All Ohio Red on the EYBL and played really well, and I thought I could be a big piece of the puzzle for this team. My older brother and three other seniors have been successful through the years from middle school, and elementary so I kind of had to find where I fit in with those guys."

A back injury kept him from making a ton of noise his freshman year, a scary thought for a prospect that already shows an advanced skill set.

"I really need to get my handle down so I can create my own shots, rather than just being the guy thats shooting. I need to be able to take him off the dribble a little. Attacking the basket I'm pretty bouncy, but I just need to know when to get around a guy. I just can't take off and end up drawing fouls."

Currently holding offers from Bowling Green, and Duquense, several programs have already made in a point to get involved with the high upside prospect.

Javin Etzer, older brother and Miami(OH) signee has been a quiet guiding light in his younger brothers recruitment.

"He doesnt really talk much about it. We just go to the gym together twice a day, three times a day, shooting. It helps you figure out a lot about the recruitment process. Having someone older, going with them to all the camps and visits. My mother and father both played college basketball, so did my uncle dog for Ohio State. My dad played at Ashland and my mom started at Xavier and then transfered to Ashland."

Etzler is well on his way to a high major showdown as an up and coming prospect in Ohio. Justifiably so as he projects so well for a number of reasons. With his bloodlines being a plus, Etzler has the size, fluidity and the shot making capabilities to be hot commodity as he grows older.

Our Best of the South on July 11-14th will be the biggest live period event in the country. With 35+ courts under the same roof, we will be the premier destination for college coaches and top non sponsored teams. For more information, click here. In July, you must get it right. For more information on this event and others, feel free to call Tai Young at 470-266-8862 or email at tyoung@hoopseen.com