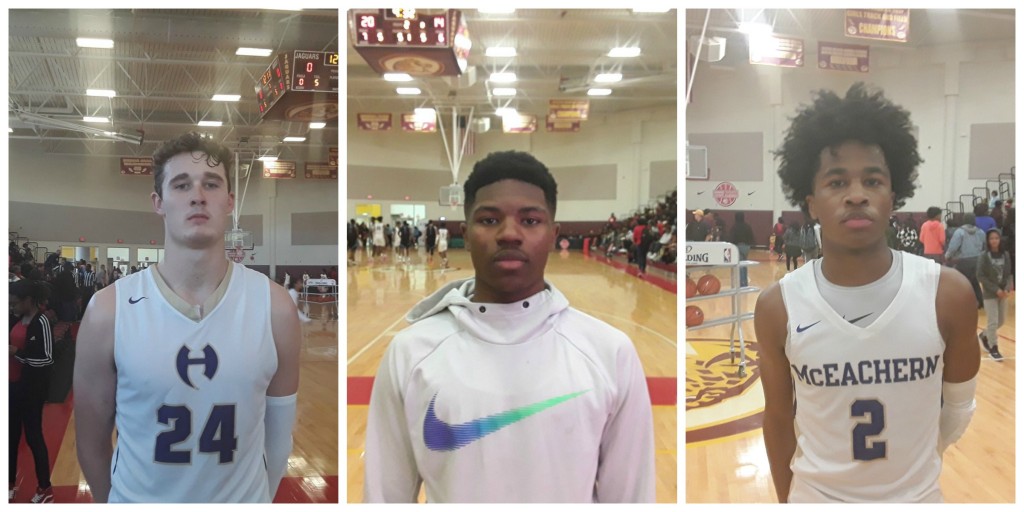 The Hawks Naismith Classic offered a loaded field for teams from all over Georgia. Despite all of the talent that was in attendance, ultimately there five that made my top performers list.

Chance Moore, 6-5, W, Holy Innocents, 2021: I love when a player comes out in the early season action to make a statement. Chance Moore's play was outstanding on the offense end as one the events few three level scorers. Often times the free throw line is reserved from elite level prospects as they draw the benefit of the doubt from whistle stingy referees. Moore would routinely stick both arms on drives in a James Harden-esque way that would bait defenders in to reach for the ball. Given his length, athleticism, and ability to play in crowds, expect for Moore to penned in for 8-10 free throws a game. With the lack of size on HIES roster, a need for Moore to rebound at a high rate could help his potential as a prospect down the line. It's a burden that few seniors can handle, but this talented prospect could linger around a double-double mark throughout his sophomore campaign.

Nathan Presnell, 6'8, F, Hiram, 2019: It didn't take long for this two-sport athlete to shake off the rust of joining his team after football. Once warmed up, Presnell would steer the Hiram ship to 18 points from a number of different ways. Despite having made a three during the game, Presnell would use his size to get some early baskets. A nice left shoulder hook and jumpers from the elbows would show some of his touch from the boxes and elbows. As I touched on earlier this week in my early signing day write-up, it's amazing to see how much size is still left in Georgia's 2019 class. Showings like this throughout the season should land Presnell his first offer.

Jordan Meka, 6'8, F, Mt. Bethel, 2020: There was a quite the debate on the baseline yesterday about where Jordan Meka ranked amongst the states best shot blockers. That debate was settled yesterday as just the mere presence of Meka trailing on a break caused a defender to miss an easy chip in. Couple that fear he instills with actually obtaining 5 blocks throughout the game and its easy to see why he offer sheet grew throughout the spring and summer. His ability to anchor the paint is well noted amongst mid-major and high major staffs but his ability to be a scorer for Mt. Bethel will only increase his stock. As he took on double teams and made shots from the perimeter, you could see a prospect that's still learning ways to make use of his all his talent. With a developing skill set and a knack for blocking shots, expect Jordan Meka to have another great year for a solid Mt. Bethel team.

Terrell Burden, 5'8, G, Campbell, 2019: I've heard a lot Terrell Burden in recent month and I must say he didn't disappoint in the slightest. From dazzling finishes to points from the outside, Burden scored in a way that can be replicated on a nightly basis. Some guards of Burden's stature often struggle in traffic or to find ways to produce inside the arc. Despite making several threes throughout the night, it was Burdens play in traffic that often yielded the best results. Quick bursts of in and outs and low hanging crossovers helped the Campbell guard separate from the first defender, only to then craft together a finish at the rim. A game winning shot was a fitting way to end a game in which he poured in 28 points. By seasons end he's a player that could crack the top 10 list of GHSA scorers.

Sharife Cooper, 6'1, G, McEachern, 2020: No surprise here as Sharife Cooper is the first player to make his way into my top 5 in back to back weeks. Efficient use of his touches was something that was on full display as Cooper set up teammates throughout the game's entirety. Often times it seems like Cooper is bored with the defense as he looks for new and unique moves to bring some excitement to this weeks game. His 25 points and 5 assists would lead McEachern past Westlake as they continue to beat some of the state's best.