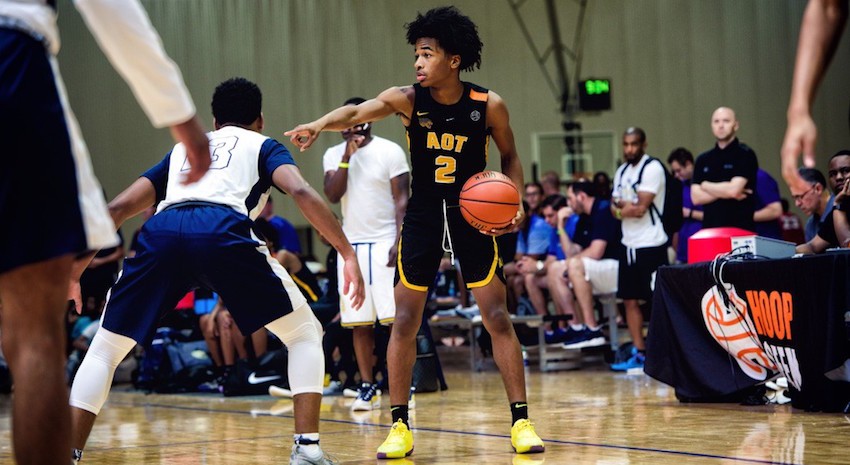 Auburn's 'Big Cat Weekend' has been synonymous with the football team's prime recruiting weekend over the last decade. While many of the top football players in the country will make their way down to the Plains for the football festivities, the gridiron players won't be the only high-profile recruits on campus.

Bruce Pearl and his staff have also utilized the weekend as a big recruiting pitch for the basketball team in recent years, too. This year will be no different. In fact, you can make the argument that this could be the biggest recruiting weekend for the basketball program in its history as it hosts 'Fish Fry Weekend.'

The Tigers are expected to host up to ten of their biggest targets on the hardwood, headlined by three five-star 2020 prospects. Walker Kessler, one of the top big men in the country from Atlanta (GA) Woodward Academy, will make his official visit to campus, while travel teammates Brandon Boston and Sharife Cooper (pictured above) will also make the short trip over from Georgia unofficially.

The two top rising seniors in Alabama will also be on campus in 2020 Jeff Davis (AL) power forward Rongie Gordon and 2020 Mountain Brook (AL) guard Colby Jones. Both players have seen their recruitments go to the next level in recent weeks with multiple high-major scholarship offers. Auburn is expected to be the next offer for Jones, who has excelled on the Nike EYBL circuit this spring.

Kentucky guard Justin Powell, who has already earned an offer from the Tigers, will also make the trip to campus. He has averaged 13.2 points per game while making 11 of his 20 attempts from three with Indy Heat on the EYBL circuit.

The rising seniors and 2020 class won't be the only prospects in town for the festivities. Pearl also expects to host some of the best 2021 guards in the Southeast.

J.D. Davison, the top overall prospect in Alabama's 2021 class, will make the short drive over from Letohatchee (AL) Calhoun School to take in the weekend, while the top 2021 player in Mississippi, Daeshun Ruffin, will also be on campus. Ruffin was one of our top performers from the Bob Gibbons Tournament of Champions recently. Ruffin averaged 25.8 points per game for MEBO Express on EYBL, headlined by a 51-point performance this past weekend in Dallas, Texas.

Since hiring Wes Flanigan as an assistant coach last year, Auburn has made it a priority to recruit the state of Arkansas. Flanigan was formerly the head coach at Arkansas-Little Rock before returning to his alma mater as an assistant coach. 2021 Marianna (AR) Lee wing Terran Williams will be in attendance for the premier weekend, too.

Auburn also hosted a big visit weekend during the fall as the basketball program hosted its pro day for NBA teams. Boston, Cooper, and 2019 signee Isaac Okoro were among the players on campus that day. If the past few years are any indication, Pearl and the Tigers are in for a successful recruiting weekend.