The Super Six from the 2019 Bob #Gibbons Tournament of Champions 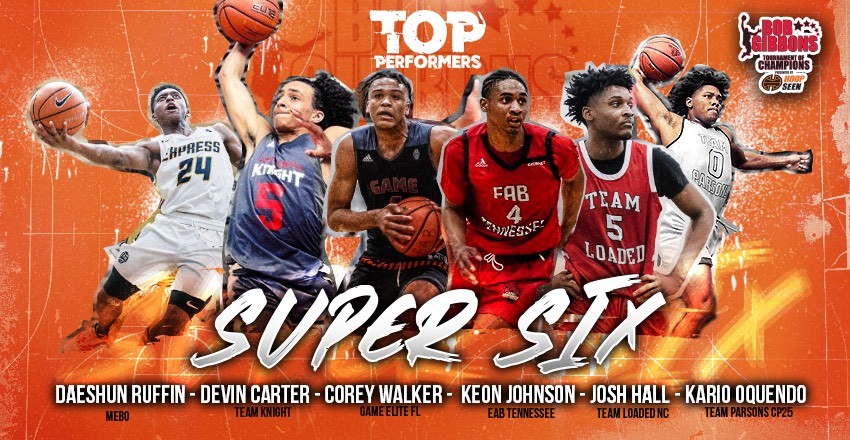 The Bob Gibbons Tournament of Champions is in the books and our staff had plenty to take in. After a night of discussion and debate, these six players stood out more than everyone in our 17 and under division of the event. Meet this year’s Super Six from the action.

Devin Carter, Florida Knights
What a weekend it was for Carter. After piloting his team to the 17U championship, Bob Gibbons named him MVP of the tournament. He was a big shot maker, a big-time playmaker and a guy who wanted to have the ball in his hands in a late game situation. Few did it better than him in clutch situations. Carter raised his profile tremendously at the Bob Gibbons Tournament of Champions. Carter shot very well. He was confident when the ball left his hands. Carter connected on a dozen triples. His athleticism is sneaky and his ball-handling paired with passing exploited some defenses. If you’re looking for a recruiting stock-raiser after this event, Carter is your guy. - Justin Young

Josh Hall, Team Loaded NC
Top 25 national player. That’s been my narrative for Hall all travel season long. Tai Young started the thought back in the high school season and we’ve subscribed to it now that we are past the halfway point in travel hoops. We saw a full offensive display from the North Carolina native at the Bob Gibbons Tournament of Champions. He was outstanding from three, scoring off the bounce with ease. He has prototypical next level (and a level past that) size for his position and we continue to see a growth in his game. Hall is one of the few players who have a true take over quality to his game. He wants the ball in clutch situations and he knows how to deliver. Looking at our season so far, Hall has been one of the best play to on our big stage. - Justin Young

Keon Johnson, EAB
What an absolute dominant weekend for the athletic guard from the state of Tennessee. The 6-foot-4 pogo stick was outstanding from tip to finish. If there were any concerns with his three-point shot development, rest assured that area has vastly improved. Johnson hit 14 triples over the course of five games and averaged 26.4 points a game during the tournament. He was one of the top overall scorers in the field and one of the toughest players to defend. Johnson was his usual wow self at the rim and played well in the open floor but it is his overall skill that continues to impress. Just an absolutely brilliant weekend from Johnson. - Justin Young

Kario Oquendo, Team Parsons
When looking at the short list of high impact two-way players, Kario Oquendo was a name that would routinely come up amongst our staff. Game-changing athleticism and a tuned up motor allowed him to make plays that stood out, even amongst his 4 and 5-star peers. There’s a Russell Westbrook like approach to his game that shows he’s willing to carry the team on any given possession. His competitive demeanor is contagious enough to rally the troops when needed and that became more evident as the brackets got deeper. On one of the most prestigious stages in the country, a statement was made by Kario Oquendo. - Tai Young

Daeshun Ruffin, MEBO
Hard to guard. That’s what follows 2021 point guard Daeshun Ruffin. The 5-foot-10 scorer was the most challenging guy to guard in the backcourt at Gibbons. With his combination of quickness and athleticism, Ruffin has made his claim as one of the top scorers in the country. He makes tough shots from anywhere on the floor, led by his shooting off the bounce. However, he is a more than capable ball-handler and passer, too. Several high-major schools are already prioritizing him and I would expect that number to grow in the future. He has a chance to be a game-changer at the college level. - Garrett Tucker

Corey Walker, Game Elite (FL)
There wasn’t a more polished scorer in the field than Walker. The 6-foot-7 forward produced each time out from all over the floor and in a variety of ways. His shooting and perimeter play received a lot of the talk throughout the weekend and rightfully so. However, one of my biggest takeaways from Gibbons regarding Walker revolves around his frame. The future Tennessee Vol has added a considerable amount of muscle to his frame, making him an even tougher guy to handle. He used his body masterfully on his way to scoring at all three levels. - Garrett Tucker