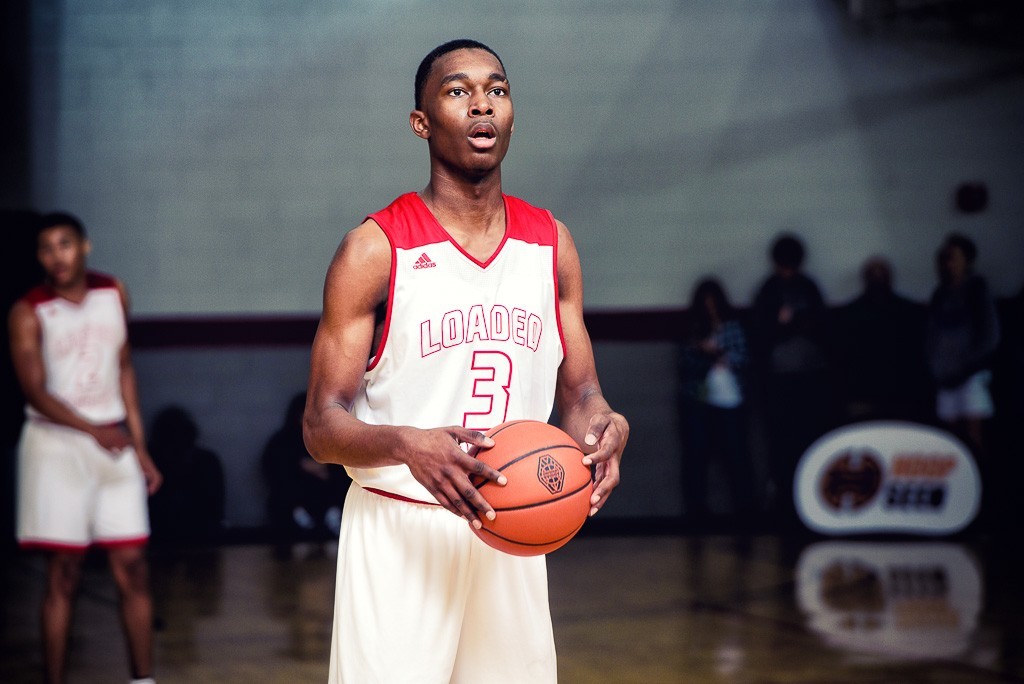 Following up from our second Fastbreak Friday segment, we take a look back at some weekend winners from the second round of on-campus visits.

Team Loaded NC forward Jaelyn Withers impressed our HoopSeen staff with his tremendous showing at our Tip-off event earlier this spring. During his last conversation with us, he was finishing an unofficial visit with Louisville where he had the opportunity to see what they had to offer. Withers stressed that he wanted to go somewhere that would allow him to play the 3 spot as well as have the chance to make an immediate impact as a freshman. The Cardinals must have granted his wishes as the versatile forward made a verbal commitment to the staff during his official visit this weekend. Withers started this season with a bang as he was one of the most impressive players to start our spring season. For those few Cardinal fans that may not be familiar with what Withers bring to the table, here's a highlight of one of his eye-opening possessions from our Tip-off event.

#SCTop10 @jaelyn_durant of @teamloadednc with a monster dunk on a 6-10 defender. Big time play from a big time player in a big time game here at our HoopSeen Tip Off. pic.twitter.com/RSsVRoI5MV

One of our senior showcase standouts decided to wrap up his recruitment over the weekend as Grayson/Smyrna Stars forward Terrence Porter committed to Charleston Southern. Porter was a late bloomer, as his recruitment began to pick up steam during the summer period with the Smyrna Stars. Porters profile started to rise as coaches saw glimpses of an intriguing perimeter-post talent. Given his size and skill, it became difficult for coaches to ignore a potential diamond in the rough that is still piecing his game together. Terrence Porter hasn’t started to evolve into the prospect he projects to be as he is still finding his niche that will best keep him on the floor. The emerging talent should benefit greatly with a post-grad year at the Skill Factory, where head coach Rob Johnson has a history of developing similar prospects.

Porter joins former Grayson guard Travis Anderson, giving the Buccaneers another talented piece out of Georgia. Charleston Southern is not a program that is unfamiliar with the state's talent as Timmy Sellers, Phlandrous Fleming, and Christian Keeling have all made their way from Georgia to Charleston in recent years. The addition of former Woodward Academy assistant coach Arlon Harper could only strengthen those ties to the state.

Ja’Queze Kirby of Jeff Davis and Luke Champion of Lambert are names that high major staffs are starting to look into as we roll over into September. Both are great at what they do and have begun to use those talents to generate some buzz going into their junior seasons.  Kirby brings a junkyard mentality to every game while Champion has as good of a long ball as anyone in the state of Georgia. Champion has a handful of Division 1 offers and spent this weekend at Alabama while Kirby spent some time in Auburn with fellow Georgia standouts Isaac Okoro, Sharife Cooper, and Ebenezer Dowuona.

Omar Croskey of Upward Stars Columbia picked up an offer from Francis Marion this weekend as the Sumter prospect continues to show his value to coaches. His showing at the best of the south turned heads as he often lead his team in scoring against some stiff competition. He’s a tough-nosed 6’5 shooter that can defend his position and handle himself defensively.  Coker, Salem, and South Carolina State have all offered with several more taking notice.

A sleeper prospect for low to mid-major programs landed his first offer as JSI forward Jeremiah Littlepage gained his first offer from Alabama A&M. JSI had a good season overall during our HoopSeen events, much in part to under the radar prospects like Littlepage. What he lacks in build he makes up for in production and potential as a forward that can operate efficiently from the mid-post. A&M is thinking long-term with this offer, as Littlepage could be a prospect that eventually emerges during the latter part of his collegiate career. It will be interesting to see if other in-state programs take a look over the next few months.