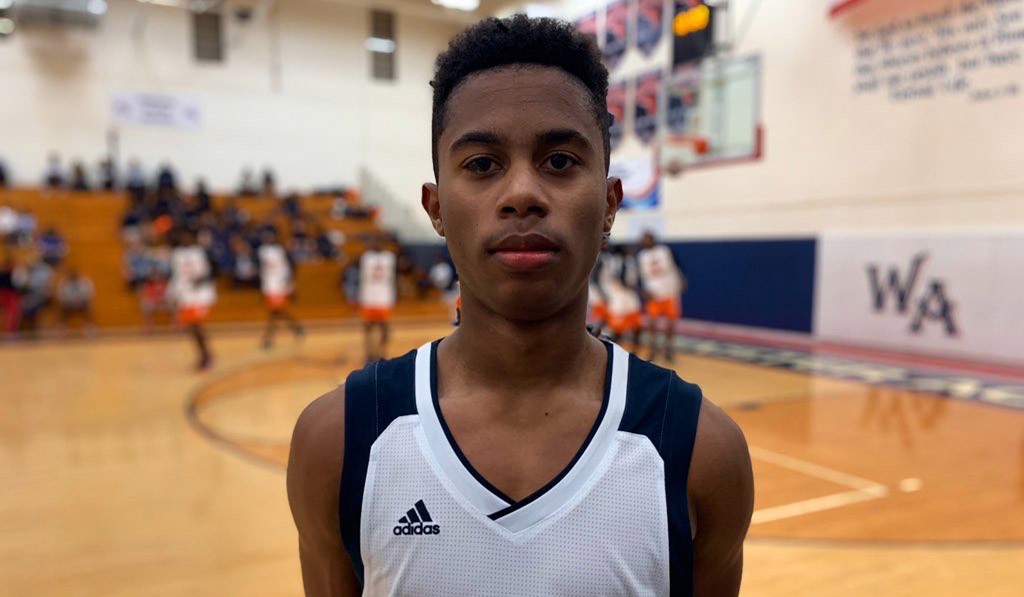 FORT LAUDERDALE, FL - The second day of the Sunshine State Preseason Classic is in the books. The action from Westminster Academy gave us a chance to see some talented seniors from South Florida and a glimpse ahead into the the 2022 and 2023 classes.

Jose-Luis Benitez, Schoolhouse Prep (pictured above): The native of the Dominican Republic was really impressive in his team’s win over IMG Academy HS. He was an effective driver and passed well out to the wing. His quick hands and awareness creative offensive opportunities for himself and his teammates. Benitez plays with high-energy and didn’t force bad decisions in the speed of the game.

Anthony Lopez, Jr., Schoolhouse Prep: He impressed us at the Hoops Exchange Fall Festival with his perimeter scoring touch. We saw that same sort of effectiveness on Friday night against IMG Academy. Lopez drilled three corner triples and was a constant threat to score from deep. He scored 15 of his team’s 41 points.

Jace Howard, University School: The senior was really good in victory against a tough University School in the nightcap of Friday’s action. He finished with 18 points and 14 rebounds in the win. As usual, he was all over the floor and competed with purpose. His work on the glass was key and the second chance opportunities paid dividends in the end.

Harry Santiago, Grandview Prep; The 5-foot-10 point guard was terrific in his team’s loss to the University School. Santiago scored 27 points, blew by his defender any time he wanted to and shot lights out. He was one of the best point guards we saw here in the two days of action.

Caleb Gordon and Martin Mercedes, Boyd Anderson: The senior duo combined for 44 of their team’s 77 points in their win over host school Westminster. They were a combined 10-10 in the fourth quarter in a great back-and-forth game. Both guards played well in the two games of action here at the Sunshine State Preseason Classic. Getting to the foul line with speed and quickness seems to be their trademark skillset.

Nathan Montaque, Somerset Academy: The 6-foot-4 wing was an important producer for his club in a Somerset win against Taravella. Montaque attacked the rim with good effort and finished in the paint. He’s a slasher and a good rebounder and deep into the fourth quarter during a late comeback he drilled a pair of important three-pointers. Montaque said he’s heard from Western Carolina and Jacksonville.

Jehu Wright, Schoolhouse Prep: The 6-foot-8 big man from the Bahamas was the biggest revelation of the day. The junior from the Bahamas played the role of post producer. He is a good rebounder with a strong frame and good awareness as a rebounder. Wright doesn’t deviate from what his strengths are. Wright is raw but he’s going to be a guy with a quick tick upward with development. High-majors will want to put him on a watch list and his recruitment will be an interesting one to keep tabs on this high school season.

I love the toughness of Westminster Academy 2022 forward Ben Middlebrooks. The 6-foot-9 sophomore post is big and strong and tough and skilled. Four things college coaches at the high-major level love about him. He’s an impressive young prospect worthy of a national recruitment. Despite his team’s loss to Boyd Anderson, Middlebrooks showed off his toughness in the heat of the battle.

I said it yesterday and I will say it again today, Taylor Hendricks of University School is as interesting of a prospect there is in Florida and nationally in the class of 2022. The 6-foot-9 big man looks so comfortable in the corner as a three-point shooter. Defensively, he’s a shot-blocker and shot-changer. There are flavors of John Henson at the same age in his game.

IMG Academy junior forward Eric Dailey is a tough dude to defend. The 6-foot-6 lefty is a true inside-outside guy with a versatile skill set. It is easy to see why a number of schools have been in to see him already.

Get ready to hear the name Nate Sasser a lot in the coming years. The South Florida youngster is a supreme slasher with a nose for getting the ball in the paint. He was in constant motion to the rim and was always a threat to make a play at the rim. We’ve seen guys like him (6-5 and long) come from Florida and transition well at the collegiate level. Sasser has the tools and the coaching to develop into a good-looking “next” guy.

SHOT OF THE DAY

Somerset for the OT win. Got ‘em. pic.twitter.com/0LiywkrtWw