Top 16U Top Performers at the 2019 Bob #GIbbons Tournament of Champions, part II 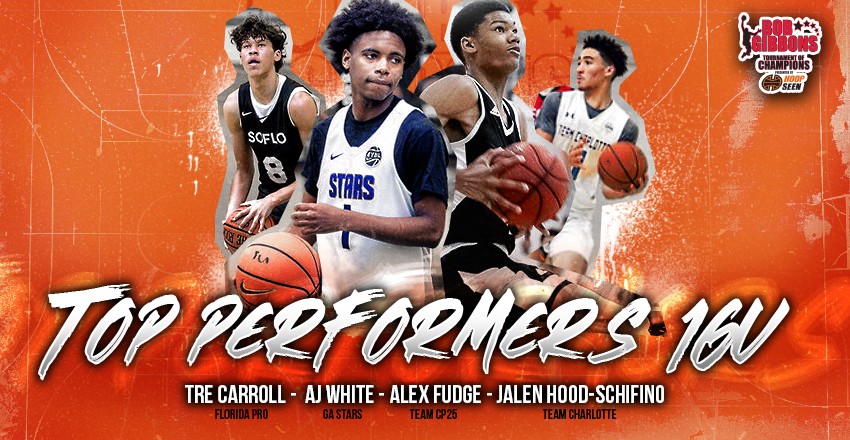 The youth movement at the 2019 Bob Gibbons Tournament of Champions was something serious. Our staff spent a good part of the event watching the 16 and 15 and under divisions. We continue our look at the top overall performers from the younger age groups.

Tre Carroll, Florida PRO
Tre Carroll shined in Florida PRO’s matchup with East Coast United on Gibbons Saturday. He exploded for 17 points in the first half and caused a ton of matchup problems for the defense. At six foot eight inches, Carroll took smaller guards to the paint and was able to glide by bigger, slower defenders. He's finished that game with 22 points and would continue to play well throughout the weekend. - Bre Singleton

Alex Fudge, Team Parsons
For as impressive as Team Parsons 17u group has been, the cream of the crop is still rising to the top. While Ramses Melendez and Fanbo Zeng have also impressed, it was the play of 2021 wing Alex Fudge that stole the weekend. He fits the mold of today’s swiss wing that may be called upon for a number of reasons. His versatility on both ends of the court point to him to be an impact player at some point in his career. Some of his hiccups come from a player that is trying to still try to understand all that he is capable of. A quick look into the future shows me a prospect that could have a highly productive collegiate career.- Tai Young

Jalen Hood-Schifino, Team Charlotte
One of the best guards that I saw from the HoopState at Gibbons. Great size at 6-foot-4 playing the point guard position. He excels on drives to the basket and facilitate in transition. He plays under control and doesn’t let the pace of the game affect his play. He finished off drives to the lane with contact and spends a lot of time at the free-throw line, something college coaches love. He always has his head up in transition and has court-vision, several times finding the open man that nobody else seemed to see. He has offers from Florida, USF, Virginia Tech and Illinois. Hood-Schfino heads to Florida this week for USA Basketball. - Justin Byerly

AJ White, Georgia Stars
One of the best traditional point guards I saw in the 16U division at Gibbons was Georgia Stars PG AJ White. Often the smallest player on the court, White makes his presence felt with tough on-ball defense and impressive scoring ability. He put up 21 points, all in the second half on Saturday against a solid JSI Elite squad that had held the lead for 90 percent of the game. He gets his teammates the ball in perfect spots for them to easily get buckets. White continues to perform well at Hoopseen events this summer. - Bre Singleton