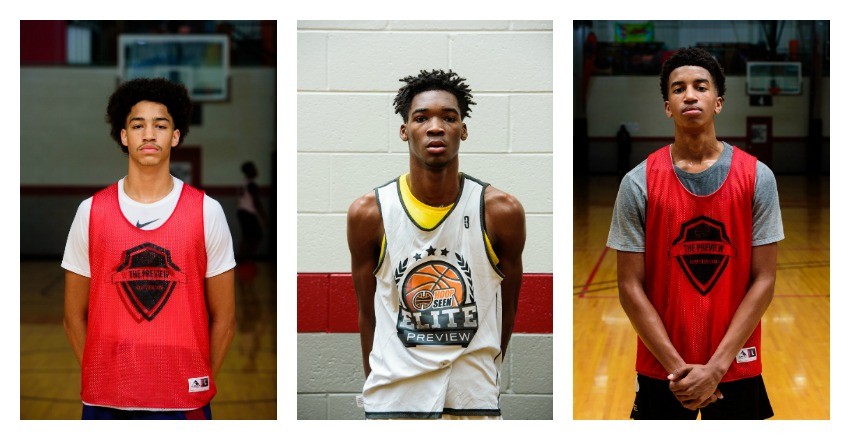 The Elite Preview 2021/2022 camp is in the books at this year's group of freshmen and sophomores came strong on Sunday at Suwanee Sports Academy. Our staff of coaches and evaluators break down the top overall performers. Meet the second wave of the top dogs from the event.

Joyful Hawkins, 2022, F/C, Brunswick High School: Joyful is long and very athletic. He had a very nice finish when he caught the ball on the elbow and beat his man off the dribble. He is not always fully engaged and has to improve his motor but he has a lot of ability. He will settle for jumpers on the perimeter at this stage of his game but when he gets out and runs and finishes with his athleticism he is very effective. - Darryl LaBarrie

Dillon Hunter, 2022 PG, Westlake: It's very rare for a young prospect to make a big impact on the game without scoring the basketball. However, that's exactly what Hunter did on Sunday. The 6-foot-3 guard did an excellent job of facilitating and creating opportunities for his teammates, as he passed his way to a plethora of assists throughout the day. The freshman also picked his spots and was able to get a bucket when needed. With his length, ball skills, and intangibles, there's no doubt that Hunter is one of the top freshman prospects in the South. - Garrett Tucker

RJ Noord, 2021 G, Greenforest: One of the more dynamic players at our Elite Preview camp, Greenforest guard RJ Noord’s play had our staff raving about him throughout the day. With the use of a high ball screen, he excelled as time and time again defenses would have to pick their poison. By being such a willing passer Noord kept the help defense at bay thus creating easy opportunities at the rim.

Not only was he able to score but his feel for the offense allowed him to set teammates up for their cleanest looks of the game. Being both slippery and shifty, Noord has two tools at his disposal that he knows how to use very well already. His size at 6’3 allows him to be a factor defensively and when you toss in a ridiculous wingspan then all signs point to one day becoming a lockdown defender. Given his talent and potential, the best is yet to come for Noord as he has Division 1 prospect written all over him. – Tai Young

Sutton Smith, 2021, G, Denmark: I wish I had a “wow” tracker that could keep up with how many times that was said whenever Sutton Smith had control of the offense. Anytime Sutton would operate it was if things slowed down and we were watching a wizard operate on his own island. His ball handling is low and tight, leaving most overzealous defenders in a losing situation.

From shot making to distributing, Smith shows all of the lead guard qualities that will bode well for him going forward. Any lapses in judgment were quickly followed by a solid fundamental play that would make any throwback coach blush. He walked the line of flash and fundamentals better than anyone at camp. If our Elite Preview told us anything its that Sutton Smith will be manning someone’s offense for years to come. – Tai Young

Kaleb Washington, 2021, F, Pebblebrook High School: I thought he was one most intriguing players at the camp. The long 6-foot-7 forward has all of the tools and potential to be a really good player down the road. He’s long and athletic and showed off a nice inside-outside game. His passing game is a valuable trait to his overall skill set. There were moments throughout the day where he was the best player in the building. Improving his intensity and physicality will help continue to grow his game. Washington was one of my top overall players from the camp. - Justin Young