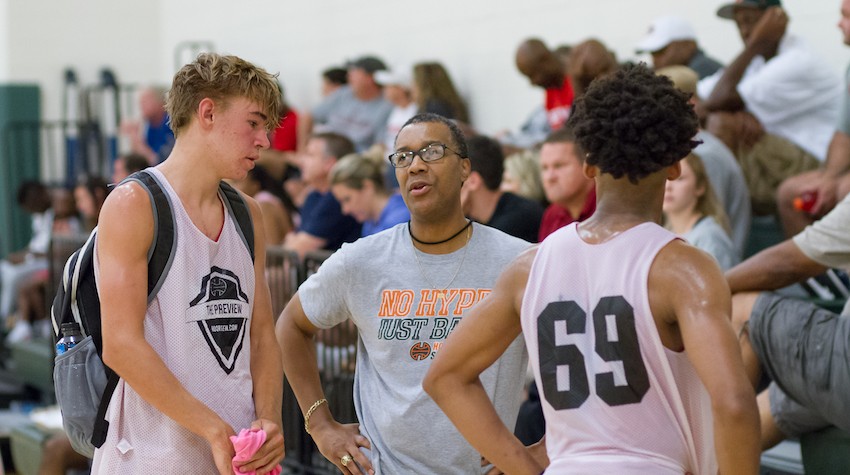 The 2018 Alabama Fall Preview is officially in the books and we begin our team-by-team evaluations from our loaded day of action on Sunday at Pelham High School.

Justin Webb, 2019 SG, Hamilton (AL): Austin Smith identified Webb as one of the top shooters in camp. Read what he had to say about the sharpshooter here.

Matthew Lanzi, 2019 SF, Chelsea (AL): Lanzi started out the day with his foot on the gas and it stayed on the pedal throughout the day. The 6-foot-5 forward runs like a deer and he used it to his advantage. He got several easy lay-ins in transition while also making plays in the half-court. He played with energy throughout the day and made a mark with his slashing ability.

Michael Lowe, 2020 SF, Good Hope (AL): Lowe was one of the most efficient players on Team 3. He showed quality shot selection each game and was a formidable scorer from the perimeter. Lowe also did a fantastic job of finding open teammates with his accurate passes.

Jon Tyler Gilbert, 2022 PF, Haleyville (AL): Gilbert had a quality day of work and started his story at camp. Read what our staff had to say about him here.

Jalen Taylor, 2020 SG, Park Crossing (AL): There weren't many guards that put pressure on the defense quite like Taylor. The speedy guard made good decisions in ball screen situations, usually getting downhill and acting as a playmaker for his team. Taylor also showed a good understanding of controlling the tempo of the game.

Myles Wynn, 2021 SG, Oak Mountain (AL): Wynn left his mark with his play on both ends of the floor. He reeled off multiple 3's in a row in game-play, but he made sound decisions on the defensive side of the ball, too. Wynn was tough enough to finish multiple baskets at the rim with contact.

C.J. Burns, 2021 PG, Ramsay (AL): Burns burst onto the scene on Sunday and left his mark. He earned a spot in our story starters column earlier this week.

Dezhion Carter, 2021 CG, Montgomery Catholic (AL): There's a lot to like about the future of Carter. The 6-foot combo guard is as tough as they come in the backcourt. He made plays with his explosive first step, whether it was scoring for himself or creating opportunities for teammates. Carter was also one of the best rebounding guards in attendance. He's one to keep an eye on during the high school season.

Grayson Dill, 2019 SG, Pelham (AL): Dill made good use of his deceptive actions and craftiness throughout the course of camp. The senior kept defenders on their toes with his steady change of pace to get by defenders. He was also extremely competitive during games, as his hard-nosed defense and resiliency going to the rim were noteworthy.