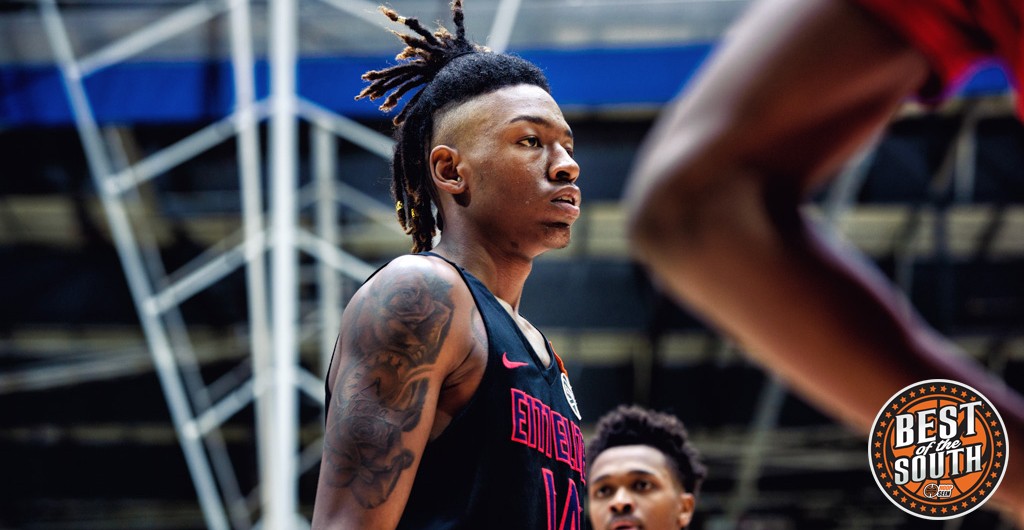 Brandon Boston, A.O.T., 2020: The Best of the South opened up with a bang thanks in large part to the 6-foot-6 superstar. Boston scored a loud 52 points against EAB in a big opening night match-up here at the BOTS. He scored from all corners of the floor, including several gorgeous three-pointers from deep. It was a vintage showing, no doubt. We’ve had the opportunity to watch his climb to the elite status from a front row seat, dating back to our Georgia Cup events. This showing was the best we’ve ever seen from him and anticipate many more like it to come. - Justin Young

Devin Butts, Team Georgia Magic, 2019: The Middle Georgia stud connected on 25 made three-pointers over the course of six games and avenged 20 points a contest. He was one of the toughest players to stop on the wing. His ability to score off of ball screens is impressive. He was one of the hottest prospects at the Best of the South this week. Coaches from all levels were on hand to see him. The most consistent? Ron Hunter and Georgia State. The Panthers have had a lot of success with players like Butts over the years. - Justin Young

Marion Humphrey, JSI Elite, 2019: Humphrey was arguably the biggest stock-riser from #BOTS, as he generated loads of interest from game to game. The 6-foot-2 guard is a slender, world-class athlete and he showed it throughout the weekend. Humphrey has elite speed and explosiveness and he used it to his advantage when getting to the basket. One of the most impressive parts of his weekend was his ability to hit shots from the perimeter. He consistently hit a couple of 3’s each game to keep defenders honest. With loads of new mid-major interest, Humphrey is a name to keep an eye on as the summer comes to a close. - Garrett Tucker

K.J. Johnson, EAB, 2019: Lost in the 52-point performance that Boston put up, Johnson was brilliant in his outing against A.O.T. The big-motor and big hair stood out in the prime time match-up on Thursday night at the BOTS. Johnson stepped up in a big way for his talented EAB squad. He scored 34 points in the game and was locked in from the very tip. Simply put, he was brilliant in this game. In a win over E1T1 from the Nike EYBL, Johnson racked up 24 points and brought the same kind of intensity. Overall, he was just outstanding throughout the event. — Justin Young

Jaden Springer, B-Maze Elite, 2020: High Major schools will make this young man a recruiting priority. Springer has a college ready body and the ability to take over a game offensively. He has the versatility offensively to play both with the ball in his hands or off the ball. The most underrated part of his game - his passing touch. Expect every high-major school in the Southeast to make him a priority.

C.J. Walker, E1T1, 2019: Walker's ascension over the past few months was on display this weekend, as he made his case as one of the best players at the event and one of the most intriguing players in the country. The 6-foot-8 forward is as versatile as they come with the ability to play and guard multiple positions. He made an impact on the floor with his motor and high intensity, while also providing mismatch problems with his ability to score inside and out. In our position-less basketball era, Walker is an intriguing prospect that continues to show his worth each time out. - Garrett Tucker