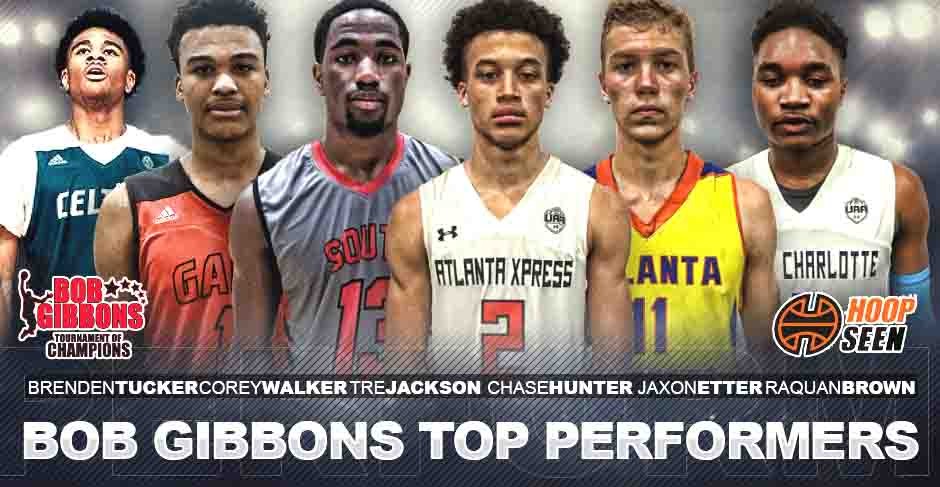 The 2018 Bob Gibbons Tournament of Champions was loaded with talent. The stars rose to the top this season. Our staff will spend the week breaking down the top dogs. Meet our some of the 17 and under top performers.

Raquan Brown, Team Charlotte, 2019, SG: En route to a 17u championship, Brown had a stretch that kept his team rolling.  A big-time shot taker and maker, the 6-foot-3 guard took it upon himself to deliver in the moments that his team needed him the most. The jumper he possesses is evident but it's his quick feet and tenacity defensively that keep my attention. Brown took the responsibility of picking up 94 feet from the basket and was able to turn defenders or cause turnovers. This type of two-way player is what wins the big one at Gibbons. - Tai Young

Jaxon Etter, Atlanta All-Stars, 2019 SG: As the event moved on, Etter’s game became harder and harder to contain. The 6-foot-4 guard scored from all spots on the floor. He drilled three-pointers, he attacked the rim with poise and purpose. He passed well and handled the ball with confidence. Defensively, he’s a key piece to one of the best defensive teams in the field. His game continues to trend upward and helping the Atlanta All-Stars claim one of the 17 and under brackets was the byproduct of his work and his teammate’s help on the floor.  - Justin Young

Chase Hunter, Atlanta Xpress, 2019 SG: Hunter put together a phenomenal month of April during the evaluation period where he picked up a handful of high-major scholarship offers. It was easy to see why some of those schools threw their hat into the ring this weekend. The 6-foot-2 guard was one of the best scorers on display this weekend, as he scored the ball in a variety of ways. Hunter was nearly unstoppable from behind the arc with his shooting ability. He rattled in several 3’s each contest, but his athleticism is improving too. He had several big finishes at the rim, including a big dunk that broke the rim on Saturday evening. - Garrett Tucker

Tre Jackson, Team South Carolina Black, 2019 CG: Tre Jackson’s stock has continued to rise with his performances at HoopSeen events dating back to 2017.  This weekend at Gibbons added even more firepower to his resume. At 6-foot-3, Jackson is listed as a combo guard and yes, he can flat out put the ball in the basket. He’s explosive off the dribble and once he got past the first line of defense, it was common to see him convert contested finishes at the rim. It was also evident that his shooting ability was a vital aspect of his playing style. He shot the ball very well, displaying both range and consistency from all areas. Jackson kept the crowd engaged with his "microwave" like scoring tendencies as he got hot throughout each game. Team South Carolina Black rode the wave created by Jackson leading them to a productive 4-1 record over the weekend. - Austin Smith

Brenden Tucker, Atlanta Celtics, 2019 SG: From a couple of courts over you could hear the impact that  Tucker was having on the game.  Often times feeding on the crowd's reactions, Tucker brought some excitement to Gibbons with some rim-shaking dunks. Watching him get from point A to B in a press gave more glimpses of what he could turn into on the defensive end.  That same first step that's used to blow by defenders was put to good use. Tucker channelled his efforts and athleticism into a passing lanes thief that would rob the offense of any advancements. - Tai Young

Corey Walker, Game Elite Gold Florida, 2020 SF: What a prospect he is. The class of 2020 forward was one of the most versatile players in the entire tournament and he found ways to produce all over the floor throughout the weekend. He’s big on the wing and tough for smaller guys to slow him down. He’s too quick and athletic for bigger players to guard him down low. And everything in between, he just dominated the field. All and all, Walker made things difficult for opponents all weekend long. He’s a no-brainer top 30 player in his class and one of the most dynamic guys in his class. He certainly proved that over the weekend. — Justin Young