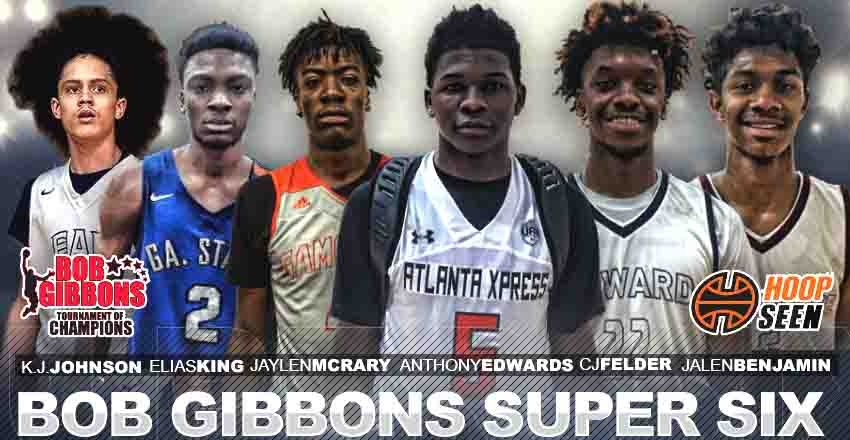 The 2018 Bob Gibbons Tournament of Champions was loaded with talent. The stars rose to the top this season. Our staff will spend the week breaking down the top dogs. Meet our Super Six from this season.

Jalen Benjamin, Stackhouse Elite, 2019 PG: Twenty-five points in the title game was fitting for Stackhouse Elite’s top scoring option. Through three days of watching the cat-quick guard, I saw more tricks out of his sleeve then I could keep up with. Shot after shot landed as Benjamin had a knack for weaving through defenses at an alarming rate. His ability to pace that collection of talented wings and posts was impressive as he also doubled as a high-level facilitator. In a couple of high-intensity moments, Benjamin stepped up to show that he has ice running through his veins. - Tai Young

Anthony Edwards, Atlanta Xpress, 2020 SG: We know he’s going to pump in the points. And he did just that. The five-star guard puts the points up from all over the floor. He’s a physical guard who shines in the open floor and with athletic ability. Edwards had his way with the field in the Tournament of Champions and continues his tear on the 2018 travel circuit. When fans were looking for entertainment, they first looked to see where Edwards was playing. He didn’t disappoint. - Justin Young

C.J. Felder, Upward Stars Southeast, 2019 PF: Felder was one of the most productive big men we had at #Gibbons. The 6-foot-7 power forward is a mismatch waiting to happen with his combination of size, strength, explosiveness, and athleticism. Throughout the weekend, Felder overpowered smaller big men while also making bigger players uncomfortable with his ability to put the ball on the floor. In an era where small ball 4 men are becoming a necessity, Felder brings tons of value to the table. - Garrett Tucker

Elias King, Georgia Stars, 2019 SF/SG: If you were worried about King slowing down after his commitment to Xavier then worry no longer. A tightened handle and sharpened decision making led to some eye-opening moments for the 6-foot-7 point guard. Thirty-seven points in an overtime win turned a ton of heads amongst our staff and fans alike. A calming presence whenever he has the ball, King ripped off several counters whenever he was threatened or put in situations that required poise.  King looks as if he's taken his game to another level and the rest of us are here to enjoy. It's obvious he's used his time wisely over the last few months to hone in on his development. Any outdated may need to be tweaked. - Tai Young

Jalyn McCreary, Game Elite, 2019, F: The 6-foot-7 forward was a match-up problem throughout the weekend and he played the best basketball we’ve seen from him in a while. He played inside and out on the offensive end of the floor. From wing to rim, McCreary was so tough to guard and slow down. In turn, he was able to get to the foul line and slowed the game down for his team. He’s a tough rebounder and could be a real problem on the defensive end at the college level because of his length, bounce and versatility. - Justin Young

K.J. Johnson, EAB, 2019, PG: Once again, EAB just racked up the wins and the trophies. And once again, Johnson was key in that run. He averaged 18.6 points a contest during the five-game run. He was the quickest guard on the floor in every game he played and that speed allowed him to get to the rim, and many times the foul line. He was good for a triple here and there and defensively, he was as pesky of a player there was at the TOC. - Justin Young