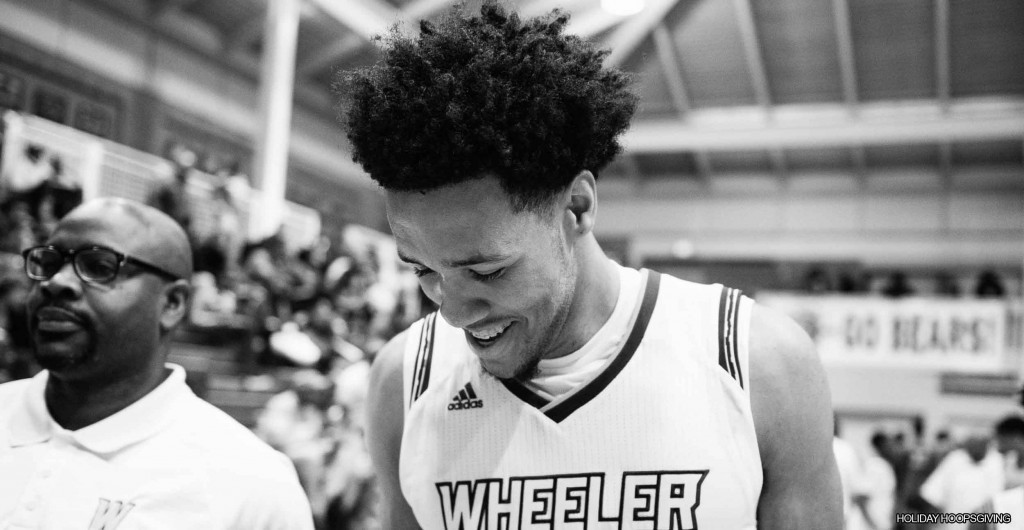 ATLANTA, GA — Another great Holiday Hoopsgiving is in the books and the event lived up to the hype as one of the best two-day events in the country. There were a lot of lessons learned from the post-Thanksgiving basketball feast. Justin Young unloads his notebook from the sidelines.

Wheeler big man E.J. Montgomery is one of the best available players in the class of 2018 nationally and the anchor of one of the best programs in the country. The 6-foot-11 big man was once committed to Auburn but opened things up after the news of the FBI investigation involving former assistant Chuck Person. Since then, the floodgates of coaches have come a calling. And they should. Truth be told, Montgomery isn’t looking anyone too seriously right now. His focus is on the court. And it shows. The 6-foot-11 big man went for 35 points (16-20 FG) and 13 rebounds against Buford on Saturday and played the role of five-star prospect beautifully. As the elite level programs lose players to the NBA this season, don’t be surprised to see the elite of the elite come calling. If they saw him on Saturday, they’d be working to get him on campus as soon as possible.

For years, Georgia Tech has vaunted itself as a place where elite point guards are groomed for greatness. This year’s Yellow Jacket squad has a good one in freshman Jose Alvarado. Next year, Josh Pastner and staff have a guy that could help bolster the next wave in Montverde guard Michael Devoe. The native Floridian was brilliant in his future hometown during the Holiday Hoopsgiving event. He scored 46 points over the course of two games and shot 18-24 from the from the floor. He was also 7-11 from three-point land. Devoe also averaged 4.5 assists in Montverde’s two wins. Devoe gave Josh Pastner and staff some hope for down the line and Tech fans are already excited about the possibility of Alvardo and Devoe playing together.

Christ School (NC) guard Jalen Lecque is a five-star prospect and a NBA level athlete. He has a lot of unique qualities that teams beyond the college level covet. The 6-foot-4 guard from New York has a flair to his game that few have. His first step (going left and right) is as deadly as any guard in the country. The class of 2019 has a couple of studs at the top of the position in Ashton Hagans and Cole Anthony. Lecque is in the same category as those guys.

Outside of Montverde, Alabama’s Mountain Brook was a team that impressed me the most. The Spartans dismantled an unflappable Norcross squad and then less than 24 hours later, locked up one of the best offensive players in the country in Sanchez Nolley of Langston Hughes. Mountain Brook had a dazzling performance from their star player Trendon Watford and collectively with team defense against Langston Hughes, a state championship team last season.

Meadowcreek should be a scary team for foes in the state of Georgia. They smashed Trinity Christian (NC) 78-43 and a day later, they went toe-to-toe with another Peach State power Gainesville and went to the buzzer but won 62-61. The Mustangs are balanced but anchored by two go-to post players in Amari Kelly (Duquense) and Cory Hightower (Detroit), a defensive star in junior Jamir Chaplin and speedy point guard in senior Deavarius Nichols. Don’t be surprised to see Meadowcreek run off some more quality wins this season. Their schedule is challenging but this is team that can take the hits and deliver the knockout punch.

Warner Robins is a contender for state in Class AAAAA here in Georgia and the Demons picked up a big win against Grayson in the Saturday nightcap. Anchored by Georgia State-bound Nelson Phillips and senior guard Jacolbey Owens, Warner Robins played the role of a top 10 team in the state of Georgia. Phillips scored 27 points (10-18 FG), grabbed seven rebounds, had four assists and a pair of blocks. The team’s next game? A tough game at Westside Macon, featuring Khavon Moore.

When you start young on the big stage, maintaining outside expectations is a tough task. We’ve seen the weight of expectation crush some while we’ve seen others grow because of it. Norcross junior guard Kyle Sturdivant continues to get better and now he’s the go-to guy for the Blue Devils. I love his value as a college guard. The pace in which he plays is terrific. For the purists, Sturdivant plays in a way that you like.

Sleeper alert: Donovan Gregory of Carmel Christian. The class of 2019 wing impressed last year at Hoopsgiving and this year he was even better. The 6-foot-4 guard has a nice list of mid-major schools recruiting him. Don’t be surprised to see him grow into a top 100 national prospect.

Division I schools are lagging behind in recruiting Pebblebrook guard D.J. Murray. The senior guard could have the same kind of value that Newton grad and current Jacksonville freshman J.D. Notae has this season. Notae is averaging 12.5 points and 5.3 rebounds a game early on.

I praised Eagle’s Landing Christian yesterday so it should be noted that Class A Private foe Aquinas beat them 65-40 in the early morning game. That’s a notable win to remember come February for the Augusta team.