Recapping the GHSA opening round of state 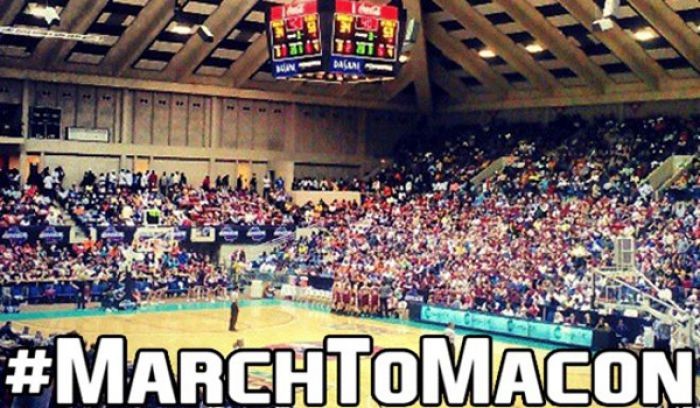 The first round of the GHSA basketball playoffs is in the books for the AAAAAA to AA classifications. There was a huge tournament-changing win in AAAAAA while a number of teams picked up some big road wins. Here is a peek into Kyle Sandy’s opening night recap.

“As long as when we walked in we weren’t intimidated by their banners…just don’t get intimidated by what they’ve done in the past. Everybody is 0-0 now,” is what Coach Geoffrey Pierce told his Grayson Rams before heading into their first round meeting with No. 1 Wheeler, the defending state champs. His senior-laden group listened as the Rams stunned the home standing Wildcats 59-58 after senior Austin Dukes hit three free throws with 3.6 seconds left to win the game; the loss is Wheeler’s first in-state loss since the 2014 State Championship 710 days ago and first home loss since Feb. 7, 2013. Nick Edwards hadn’t played all game but the sophomore found Dukes on the perimeter for the open look. “I told Dukes just shoot it. Don’t try to pump fake or anything because they closed out pretty hard and fouled him on a jumper earlier.” Grayson had trailed 32-23 at the half and 44-35 at the end of three quarters, but remained in striking distance. Pierce noted that Wheeler hadn’t played many close games and if they kept it within arm’s length, they had a shot. His eyes lit up when he saw Wheeler in a man-to-man defense, meaning Dukes and fellow senior Alphonso Willis could create off the dribble. Dukes scored 21 points and grabbed six rebounds while Willis finished with 12 points and 11 rebounds while being saddled with foul trouble. Dealing with the likes of Al-Wajid Aminu (North Florida) and Romello White (Georgia Tech) inside, the Rams were giving up size. Pierce knew heading into the game that controlling the glass would be important if they wanted to advance to the Sweet 16. “We worked in practice whenever a shot went up, we instructed them all to yell ‘shot’.” It worked out well as Brandon Uziewe and Hafeez Anifowoshe combined for 16 points and 11 rebounds battling the taller front line. With the win, Grayson now has sights set on a long road trip to Lee County. As pleased as the players and coaches are with tonight’s performance, Pierce reminded, “four more”.

No. 1 Miller Grove cruised to a 48-20 halftime lead and outscored the visiting Yellow Jackets 18-13 in the third quarter before piling on a 25-7 advantage in the final frame. Tae Hardy and Aidan Saunders led the Wolverines with 20 points apiece while adding six and four steals, respectively. UConn signee and McDonalds All-American Alterique Gilbert added nine steals with 17 points and Aaron Augustin stuffed the stat sheet with five steals to go with his 13 points, 10 assists and eight rebounds.

No. 8 St. Pius shook off a bad region tournament and took care of Cartersville in the opening round of state. The trek from DeKalb County to Bartow County didn’t hinder the Golden Lions led by Kerney Lane and Carson Seramur’s 20 points apiece. St. Pius now travels to Thomson in the Sweet 16.

In a game filled with lopsided scoring runs, No. 6 South Atlanta closed the game on a 12-5 run in the final two minutes. South Atlanta had what seemed like a comfortable 22-7 lead after the first quarter, but an 11-0 run sparked by Da’Monte Greene’s seven straight points chipped the Atomsmashers’ deficit to 26-18 at the half. South Atlanta grew the lead to 39-25 in the early in the third quarter, but a 14-0 run by Johnson tied it at 39-39 entering the fourth quarter. Johnson finally claimed the lead with just over two minutes left (52-51), but South Atlanta’s 12-5 run to close the game hushed the comeback.

Cole Smith buried a 30-footer at the buzzer for his 10th point of the night, advancing the Golden Bears to the second round. Holy Innocents’, a trendy “upset” pick heading into the tournament, proved bracket connoisseurs correct. Brent Duncan was at full health posting 23 points and 10 rebounds. Matt Meadows added nine in the win.