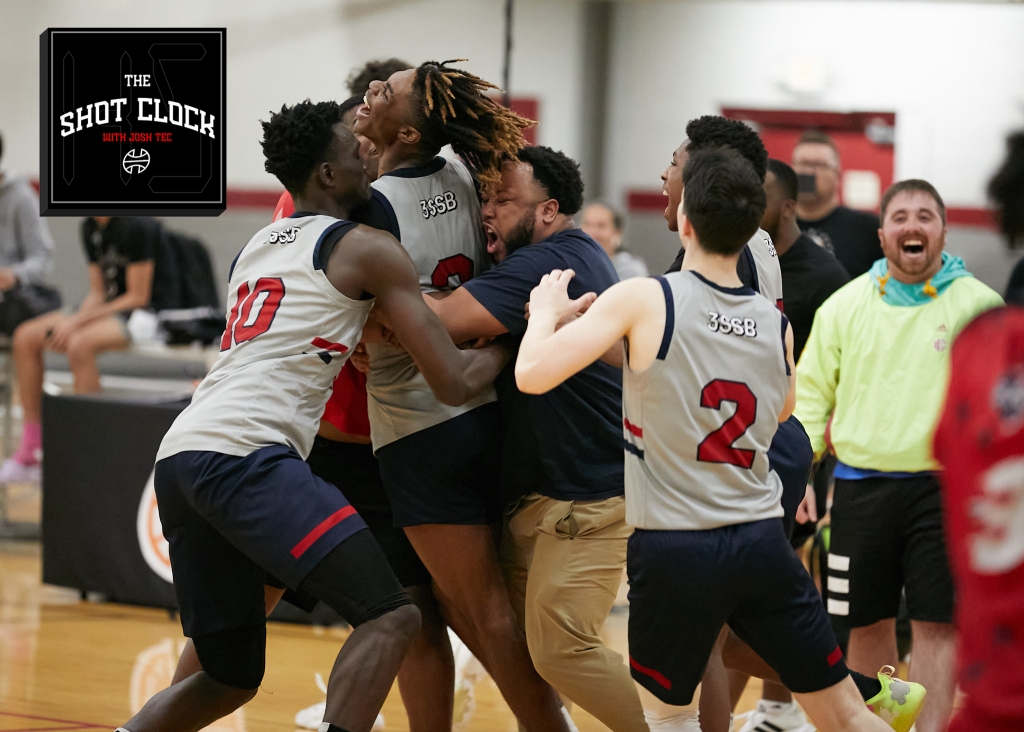 It’s Monday, a new week has started, and we have a lot going on here at HoopSeen HQ. This week, we’ll be rolling out our All-HSA teams and have more posthumous reflections on the travel season.

With the 2022 travel season in the rearview, it’s a good time for everyone to catch up with loved ones. I know I’ve been reintroducing myself to people outside of basketball circles over the last free days. It also means that it’s time to turn our focus to visit season and start tracking commitments.

I’ll take a look at all of that and more in this week’s edition of The Shot Clock!

Recounting all of the 2022 travel season is a hefty task that we’ll spend much of August working on. As a brief glance back on the season, I’ll share five of the story lines and moments that I’ll remember most.

Brock Harding’s Best of the South performance was one of the best I got to see all spring or summer regardless of level. Every great team is led by a great guard, and Iowa commit led MidPro Academy on a dominant run through the 17U division. Whether he was showing off his scoring prowess or his high-level court vision, Harding put on a show inside the Georgia World Congress Center. Hawkeyes fans should be thrilled about their point guard of the future.

Following the Atlanta Allstars’ recruitments was a season-long story that I had a front-row seat for. Going into the season, everyone knew they’d be getting significant attention from coaches at all levels. Watching their guys pick up waves of offers after the Grassroots Showcase in Louisville was gratifying as someone whose attention centers around Georgia. Brandon Rechsteiner saw high major offers pour in after a hot June before committing to Virginia Tech. Brigham Rogers turned a lot of heads in Louisville and picked up his first D1 offers after that weekend. He’d go on to field many more. He announced his commitment to Belmont. Dylan Faulkner was one of the best players I saw at Best of the South, and that showed in a recruiting spike. He’s joining Rogers in Nashville but going to Lipscomb. Spencer Elliott saw steady recruiting buzz throughout the spring. After every major event, it seemed like he added a new group of offers to his expansive list. Joining later in the summer, Noah Melson had an incredible outing during the first July live period and picked up about six D1 offers or so.

Getting to see DJ Wagner in Louisville during the EYBL session there was certainly memorable. While great, it wasn’t a highlight just to see one of the top players in the 2023 class in person for the first time. I see great players all year long. This was a special moment because of the circumstances regarding his recruitment. Kentucky had been the favorite for Wagner because of John Calipari's relationship with his family, but after Louisville hired Kenny Payne, the odds evened out a bit, and the two rival programs officially became entangled in one of the more intriguing recruiting battles in recent memory. The recruitment seemed to shift toward Louisville after the Cardinals hired Wagner’s grandfather, Milt Wagner. All of the recruiting excitement and drama came together to create a unique atmosphere whenever the NJ Scholars took the court in Louisville. Red and blue adorned the stands for each game, and it was an interesting chapter in the rivalry’s history. The energy in the building was palpable to say the least.

Eddie Ricks’ game winners to secure EAB Tennessee’s Bob Gibbons Tournament of Champions championship has to be mentioned here. Every year, there are moments at Gibbons that get cemented into the tournament’s lore. This year’s installment into the history books was Eddie Ricks’ game winners in the semi-finals and finals of the tournament. One of the game winners would have been enough to consider a top moment, but the fact that he hit two in a row in the most high-pressure games is the stuff of legend.

Commitments have started to come in bunches, and these next couple of weeks should see new developments on that front.

One commitment coming out of Georgia recently was Calhoun (GA) HS and Atlanta Allstars forward Dylan Faulkner committing to Lipscomb. Faulkner saw a spike in his recruitment during the second June live period at the second GBCA Live event and during the first July live period at Best of the South. Over that stretch, Faulkner picked up seven D1 offers, including one from the Bisons. Lipscomb fans can expect a high-motor, rim-protection, and versatile offense out of Faulkner when he gets to Nashville. He routinely approaches triple-doubles at the high school level with blocks, rebounds and points. With his upside as a defender, it wouldn’t shock me to see Faulkner be in ASUN Defensive Player of the Year discussions at come point during his time in the League.

Sticking in Georgia, Wheeler (GA) HS point guard Isaiah Collier recently wrapped a visit to Michigan. Nationally, Collier is regarded among the best point guards in his class, and he’s been in talks as one of the top overall players in 2023. While he’s been sidelined with an injury for much of the AAU season, he’s still in high demand on the recruiting trail. Collier recently trimmed his list to UCLA, USC, Cincinnati and Michigan. Per a report from On3, a decision from Collier could be coming shortly.

Grovetown (GA) HS guard Malik Ferguson took a visit to Georgia State this past weekend and committed shortly after. Ferguson and the Warriors made emphatic statements during the June evaluation period events at Lakepoint. Not only did the team appear to be the state’s best, Ferguson showed that he’s one of Geogia’s top guards in the 2023 class. With his physical, aggressive downhill play, Ferguson picked up several offers in June including one from the aforementioned Panthers. Ferguson chose Georgia State over Tarleton State, Radford, Missouri State, Troy, Tennessee Tech and Cal State Fullerton. With the hiring of Jonas Hayes, it’s been assumed that the Panthers will continue to keep some of the state’s best talent at home, and the new regime is showing that by securing Ferguson’s pledge.

Venturing outside of the Peach State, Xavier Booker out of Indianapolis has committed to Michigan State. At HoopSeen, we’ve gotten to see Booker several times over the last couple of years, and his upside has always been blatant. Read more about some of my thoughts on the commitment. Booker is currently No. 1 on HoopSeen’s national rankings.

Overtime Elite ended July with a new group of signees. Several of the organization’s newest members are local to Georgia.

Kanaan Carlyle, Bryson Tiller, Jayden Williams, and Jahki Howard are all now going to be playing with OTE. Additionally, Jeremy Fears from Illinois and Tre Parker from North Carolina have also been signed.

It’s important to note that these signees will maintain college eligibility.

Taking a quick overview of the signings, the implications at this point appear to be most stark in regards to GHSA basketball. With OTE’s facility being located in Midtown Atlanta, it only makes sense for them to extend offers to the upper crust of the Peach State’s basketball talent.

OTE’s location mixed with Georgia’s history of producing top-tier prospects will further change high school basketball in the area. As is the case almost everywhere, prep programs have plucked some of the best players if Georgia from the high school ranks, but adding OTE to that mix appears that it will serve as another obstacle for GHSA basketball. Three of the aforementioned player would have figured to have been among the best players on some of the best high school programs this coming season. Now, these changes will likely alter the season in a drastic way.

Because OTE is still in its early stages of development, there are still plenty of unknowns in regards to its overall impact. Everyone is still adjusting to it as a different avenue for players to take. There are skeptics out there, but only time will tell whether their concerns are valid. For now, it’s apparent that some of the top players in Georgia, and around the country, are at least considering it in opposition to traditional high school or college routes.

During this travel season, I remember seeing so many players that I had only previously seen at our camps in the fall. An impression can be made at any time, and it can last quite some time. If you feel like you may be being undervalued, there’s not a better way to prove it than coming out and playing well at a camp.