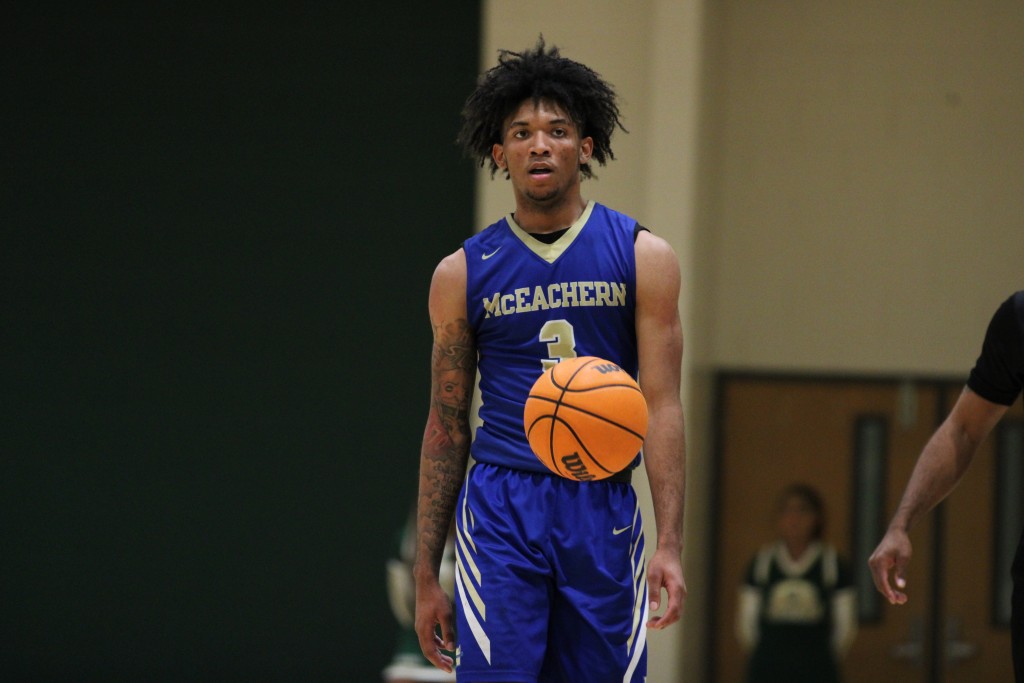 The Sweet 16 is in the books here in the state of Georgia and we have a lot to go through from the action. Who were the Sweet 16 top dogs? Who are the young players on the rise? What are the notes to know from this round? We dive into all of it.

Kaleb Banks, Fayette County: Banks has solidified himself as a top 2022 kids in the state. After winning region POY, the junior opened up the first two rounds of the state tournament with back-to-back 30-point performances. At 6-foot-7, he is a huge matchup problem. His versatility allows him to score it from any spot on the court. He has been a double-double machine all season with his big time rebounding to match his scoring. Fayette County will take on Dougherty in the Elite Eight.

Jabari Smith, Sandy Creek: Georgia's sole Burger Boy is off to a hot start through the first two rounds of the state playoffs. The 6-foot-11 Auburn signee finished with an easy 24 points in the first round and followed that up with a 36-point performance against White County in the Sweet 16. His ability to move and score the way he can with his size makes him nearly impossible to guard at this level. Smith looks primed to lead Sandy Creek to the 3A state title.

Matthew Cleveland, Pace: After getting snubbed from the McDonalds All American Game, Cleveland has been making statements. He finished with two 20-point double-doubles, while also surpassing the 2,000 career point milestone. The Florida State commit continues to prove he is a top talent in the country. He is looking to lead the Knights to back-to-back state titles.

Camron McDowell, McEachern: McDowell is one of my favorite players to watch because of the energy he plays with. He just has fun, it is as simple as that. The Georgia signee has expanded on his offensive arsenal and plays his best on the biggest stages. He was huge in McEachern's OT win over Grayson finishing with 19 points. He knocked down big shots and made stops on defense. McDowell and Chance Moore have done a great job giving the Indians a new identity in the post Sharife Cooper era.

The state tournament is a great platform for players in the senior class to raise their profiles and potentially earn the attention of college recruiters or even boost their current situation.

Kell doesn’t have the season they have had without seniors Jaylen Harris and Najhae Colon. Colon is one of the top on ball defenders in the state. Harris has proved he can compete against top talent. He is a hustle player that can score the ball in flurries. As one of the most underrecruited players in the state, look for Harris to continue to raise his stock.

Berkmar senior Dara Olonade is the X-factor for the Patriots. He is so skilled and patient around the basket. He is a bouncy athlete that gets after it on defense and on the boards. He makes the right plays and plays with a high motor.

Chattahoochee's AJ White has been such an important player in his career for the Cougars. A 2,000-point scorer, region POY, and state champion, White is one of the most prolific scorers the state has seen. He led Chattahoochee back from a 13-point deficit with 2:30 seconds left against Buford in the Sweet 16. With him on the court, you can't count them out.

Kanaan Carlyle, Milton: Milton's sophomore star erupted for 33 points in the opening round of the playoffs. Carlyle is regarded as a top guard in the county. The dynamic guard can score it with the best of them as well as make an impact on defense. I expect him to continue to shine as the Eagles continue their quest for a title.

Isaiah Collier, Wheeler: Collier is arguably the best passer in his class. His knack for finding teammates and delivering the ball on a string is nothing short of impressive. What he brings to the game is crucial to Wheeler's success. He led the Wildcats with 19 points in the Sweet 16.

David Thomas, Eagles Landing: Thomas has put up high scoring numbers several times this season and the Sweet 16 was no different. He finished with 28 points and six rebounds in a big win over Forest Park to advance to the Elite Eight. The sophomore is extremely athletic and skilled.

Tahj Johnson, Hart County: At 6-foot-7, Johnson has tremendous size. The sophomore has been a big part of Hart County's success this season. He is fun to watch in the transition game and can score it from multiple spots.

Christian Anderson, Lovett: Anderson is usually the smallest player on the floor but he sure does not play like it. The 5-foot-6 freshman plays with a ton of poise. He has a nice feel for the game. He knows when to push the tempo, slow it down, get a bucket, or create for his teammates. He has been a good floor general for Lovett this season.

The team that we’re not talking enough about in 7A is Berkmar. Entering the postseason, most people had the title coming down to Milton, Grayson, and Pebblebrook. However, the Patriots should be in that conversation as well. They have been playing really well down the stretch. When they are hitting on all cylinders, they will be tough to beat.

Veterans TJ Grant has raised his stock with the season he has had. Earning region POY honors, Grant also played a huge role in Veterans victory over Woodward to send them to the Elite Eight for the first time in program history. The 6-foot-6 wing has improved his perimeter game, adding another dynamic to his game.

Kashik Brown of Cedar Shoals has been huge this post season. His high scoring has them heading to the Elite Eight after a come back win over Stephenson. Brown is a talented scorer that could see some attention start to come his way.

Centennial has looked good. The senior trio of Kyle Duncan, Logan Turner, and KJ Spooney have come up big in the playoffs. The Knights had a solid win over South Cobb and a come from behind win against Winder Barrow in the Elite Eight. They have a tough test against Evans in the Elite Eight.

I’m interested in seeing where Berkmar juniors Jameel Rideout, Destin Logan, and Jermahri Hill take their games this travel season. All three guys have shown they can be players at the next level.

Drew Charter has made a huge jump from last season. Ja'Kobe Strozier and JaQuez Thornton have been a big part of that jump. The high scoring junior backcourt can light it up in a hurry. Their play has Drew Charter as the favorites for the title.

I was extremely impressed with the fight Westlake showed in their OT win over Heritage. The Lions were down 13 heading into the fourth quarter and raced back into the game. Juniors Gaddis Heath and Jalal McKie are so athletic and talented. They play hard every single possession and impact the game on both ends. I expect to see their recruitment rise this spring.