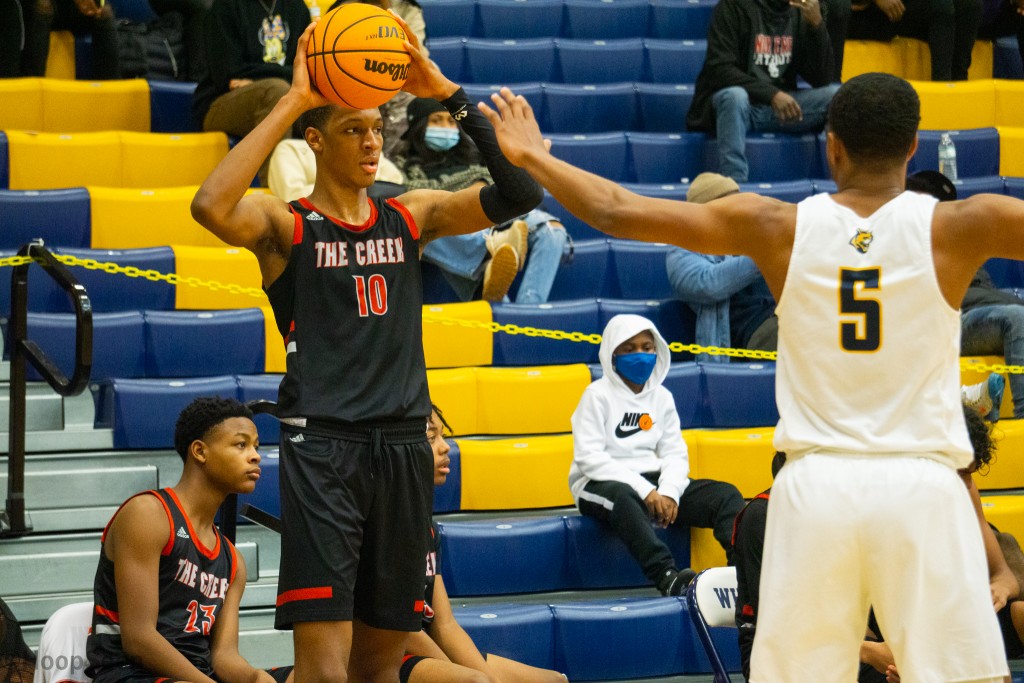 With this wild season we have had impacted by Covid-19, we are finally at the last stop of the high school season - Macon. The Final Four provided us with some games that went down to the wire, including one that was won on a half court shot at the buzzer.

Jabari Smith, Sandy Creek: The Auburn signee was spectacular once again in the Patriots' Final Four win over Hart County. Smith was dominant from the start of the game. He finished with 30 points, 15 rebounds, and 6 blocks.

Matthew Cleveland, Pace: The double-double machine notched yet another in Pace's Final Four win over Thomasville. The Florida State signee finished with 14 points and 12 rebounds. His Knights are one game away from repeating as champs.

Kanaan Carlyle, Milton: This kid is flat out special. The dynamic guard came out scorching from the outside against Pebblebrook. He finished with 24 points in Milton's 74-67 win.

Scoot Henderson, Kell: Henderson had a tough feat in front of him, leading his team down to Lee County to play a Final Four game in that atmosphere. The home court advantage was not enough for Lee County as Henderson led Kell to a 65-60 win. He finished with 21 points and six rebounds.

Kaleb Washington, Wheeler: Washington has been that go-to scorer that Wheeler needs during these playoffs and the Final Four was no different. The Dayton signee scored a team high 25 points in Wheeler's win over Centennial. At 6-foot-8, Washington is an absolute matchup problem.

Peyton Daniels, Tri-Cities: Daniels has been huge Tri-Cities all season. The Vanderbilt commit is so talented on the offensive end. He can score from multiple levels and has a smooth shot from the outside. He led the Bulldogs to a big Final Four win over Dutchtown.

Hancock Central senior Jamal Taylor hit a half court shot as time was expiring to send his team back to the championship. The 5-foot-10 guard is a straight up dog. He is a 2,000 point scorer and has proven he has the clutch gene.

Cross Creek's Abasi Scott converted on a strong drive to the rim with 20 seconds left to give his team a 1-point lead over Windsor Forest. Cross Creek won the game 77-76.

This basket by Abasi Scott put Windsor up by 1 with 20 seconds left ⁦@wfhscastle⁩ pic.twitter.com/cBWtmaj9Bc

Berkmar junior Destin Logan hit 1-2 FTs with just a couple of seconds remaining to give Berkmar a 59-58 lead over McEachern, ultimately winning the game.

Inside the Bracket Numbers

There are 14 No. 1 seeds that will be playing for the state championship. Columbia and Wheeler are the only non-No. 1 seeds left.

Region 6-2A and 6-6A are well represented in their respective classifications. Pace Academy and Columbia will meet for the second time this season in the championship. Pace defeated Columbia 67-56 in that matchup. Kell and Wheeler will meet for the fourth time this season. Each matchup has had a state playoff type of feel to it. These two teams were the preseason pick to meet up in the finals. The Wildcats lead the series 2-1. This will be the most important meeting yet.

Notes from the Notepad

Eagles Landing has been absolutely dominating throughout these playoffs. Through the first four rounds, the Eagles have beat their opponents by an average margin of 32.7 points. That is almost unheard of in the state playoffs. Sophomore David Thomas and junior AJ Barnes have been huge. They will have a tough task ahead facing Tri-Cities in the finals but it should be a good one. Both teams have been dominate all season.

Holy Innocents' put on a big time performance in their 59-46 win over St. Francis. St. Francis had a ton of momentum heading into that game after defeating Greenforest a couple of days prior. Alabama signee had been on a tear, but that Golden Bears defense did a nice job containing him. Unsigned senior Garrison Powell finished with 24 points in the win.

It is sad seeing Camron McDowell's career coming to an end. He has had a spectacular season for McEachern. Most people did not expect the Indians to have the season they did after the departure of Sharife Cooper, but McDowell had another thing in mind. The Georgia signee is one of the most improved players in the state. He plays with such a high motor and has expanded on his offensive arsenal. He scored a game high 25 points in their loss against Berkmar.