The Shot Clock with Josh Tec: Three Takeaways from the Nike Elite Showcase 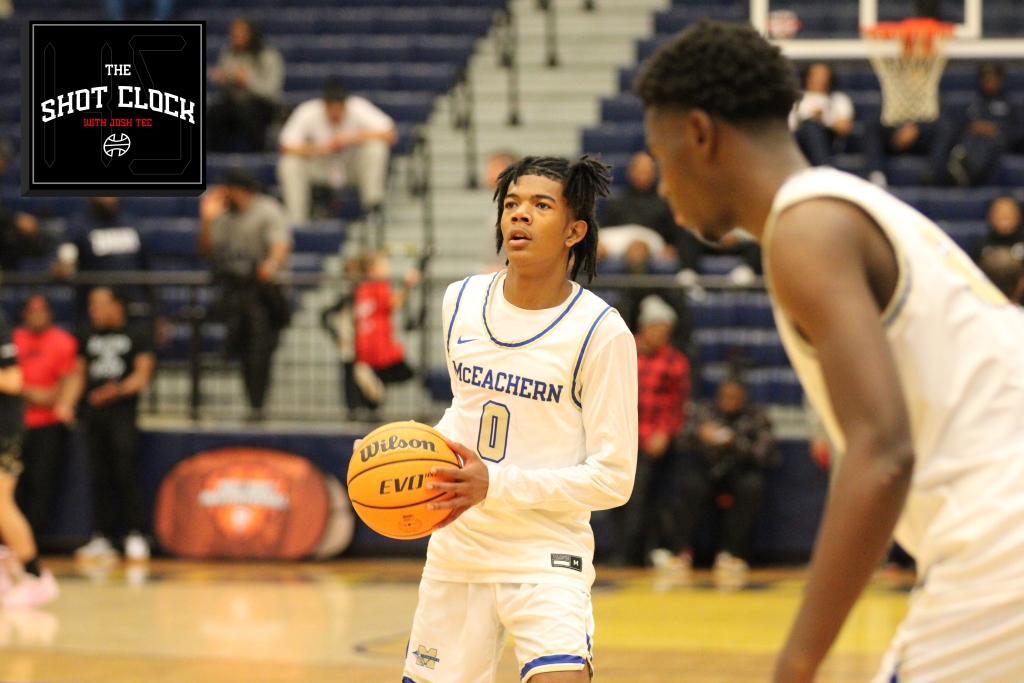 The Shot Clock with Josh Tec: Three Takeaways from the Nike Elite Showcase

It was a busy weekend for me. I was in Florida on a hoops road trip that took me from Atlanta to Jacksonville to Orlando and back on consecutive days.

While I spent much of my time watching basketball for fun, I did get a good work day in on Saturday when I returned from the Sunshine State in time for the Nike Elite Showcase at Pace Academy.

It was the first year of the event, and I hope we get many more in the future. While most of the major events of the season are in the rearview, this was one of the high-level events left on the calendar before state playoffs begin.

Here are three takeaways from the three games I saw.

McEachern’s as dangerous as anyone at full strength

Saturday was my first opportunity to see McEachern since JaMichael Davis returned from injury. Back in November, I thought that McEachern was among the most likely teams to win 7A after watching the Indians pick up wins against some of the state’s best teams like Greenforest, Grovetown and Newton. When Davis was out with his injury, they faltered a bit which is going to be the case for most teams that lose a point guard of the caliber of Davis.

Now that he’s back, this team’s ceiling has elevated back to what it was in November. Davis and Moses Hipps form one of Georgia’s best backcourts. It’s undoubtedly one of the most potent from a production standpoint. In a win against Oak Ridge (FL) on Saturday, the pair combined for 44 points, which included 11 rebounds and 7 assists from Davis. It wasn’t a fluke, one-off performance. They boasted similar numbers when I saw them play Grovetown earlier in the season. Davis and Hipps have proven to be difference-makers against two of the tougher teams on their schedule.

McEachern’s backcourt is great, and they have one of the best forwards in the country in Ace Bailey. He’s a walking double-double who adds versatility and pure talent. Bailey is the focal point of opposing scouts and game plans. Joining him at the forward spot is Jalen Hilliard who is one of the unsung heroes on this team. His motor and athleticism help him produce on a consistent basis. He’s another double-double candidate whenever he takes the floor.

Then, guys like JD Palm, Earnest Ofremu, Jayden Bynes and Nnadozie Onyirimba have also been bright spots for this team at times throughout the season.

Pebblebrook is heating up

At the Nike Elite Showcase, Pebblebrook picked up a sparkling win over Norcross. With the win, the Falcons have won six games in a row and are building some serious momentum going into February.

Dayton signee Jaiun Simon was relatively quiet by his standards, he had 10 points, 3 rebounds and some foul trouble to deal with, but Jase McCullough and Cam Smith stepped up and combined for 28 points. Both guys shot the ball well and ended with a combined seven 3-pointers.

Pebblebrook now has wins over Norcross, McEachern and Grayson. All of those rank among the best teams in Georgia. This team has made back-to-back final four appearances and looks to be rounding into form at a good time.

Milton continues to impress this season with a win on the road against Pace Academy. Furthermore, Josh Dixon continues his star-making sophomore year with another 20-point game to add to his resume.

Now that we’ve made it most of the way through the high school season, Milton’s resume is looking better and better. Their only loss to an in-state team came against a region foe when they played Lambert on the road. That was a single-possession loss.

When thinking about the teams that can make a run in the upcoming playoffs, Milton has done more than enough to present a serious threat in 7A. They have a big week ahead of them. The Eagles play Denmark on the road on Wednesday, they host Lambert in a revenge game on Friday, and they host North Mecklenburg (NC) on Saturday.