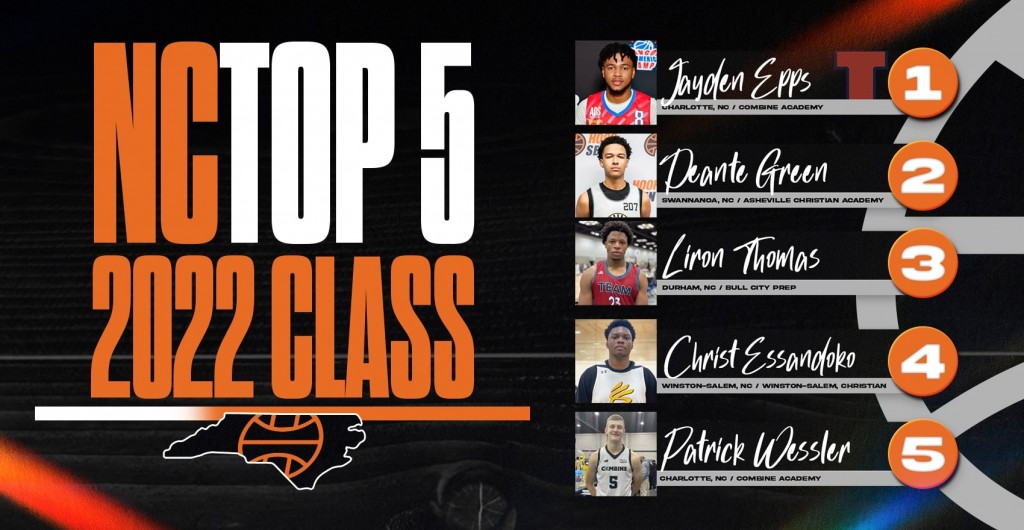 With the summer nearly behind us, we have released our 2022 updated rankings for North Carolina.

We’ve been coast-to-coast with our own events, national camps, tournaments and other platforms over the last year. We’ve also watched hours and hours of film of players from across the country.

Some movement at the top as Illinois commitment Jayden Epps has taken over the top-spot going into the fall. The 6-foot-3 point guard from Virginia recently transferred to Lincolnton (NC) Combine Academy to play under former NBA-player Jeff McInnis. The one-time Providence commit picked Illinois and Head Coach Brad Underwood over offers from NC State, Connecticut and Kansas among others.

Coming in at the two-spot is Asheville (NC) Christian Academy forward De’ante Green, Green held the number-one spot for much of the year before dropping one-spot after his summer campaign. Green spent the summer with Team CP3 and has a final-six consisting of Virginia Tech, Florida State, North Carolina, NC State, Wake Forest and Tennessee.

The third-spot in the updated rankings goes to Liron Thomas, another out of state player spending his senior season at Durham (NC) Bull City Prep. Thomas is a 6-foot-5 guard that recently listed his top-six choices, Memphis, Ole Miss, NC State, Georgia, Houston, and the Overtime Elite league.

French-born Christ Essandoko, a 6-foot-10 power forward out of Winston-Salem (NC) Christian taked the fourth spot. The big man had a productive summer with Team Curry and has seen his recruitment take-off. He has taken two official visits (Maryland and Providence) and has visited two schools unofficially (NC State and Wake Forest). Pitt is also in the mix along with Ohio State, Georgetown and West Virginia.

Nobody had a stock-rising like Patrick Wessler did over the past four months. In June alone, Wessler picked up offers from Cincinnati, NC State, West Virginia and Ohio State all while playing for CC Elite, an independent team based out of Charlotte, North Carolina. Wessler is planning his visits and will visit schools in the next couple of months.

8 - Number of players already committed at the time of publication.

3- Number of Team Curry prospects in the top-10.

3 - TNumber of prospects in the top-10 have already committed.

4 - Number of  prospects in the top-10 are from the Charlotte metro area.

13 - Numbers of players that are ranked in the top-50 that played in the HoopSeen Association.