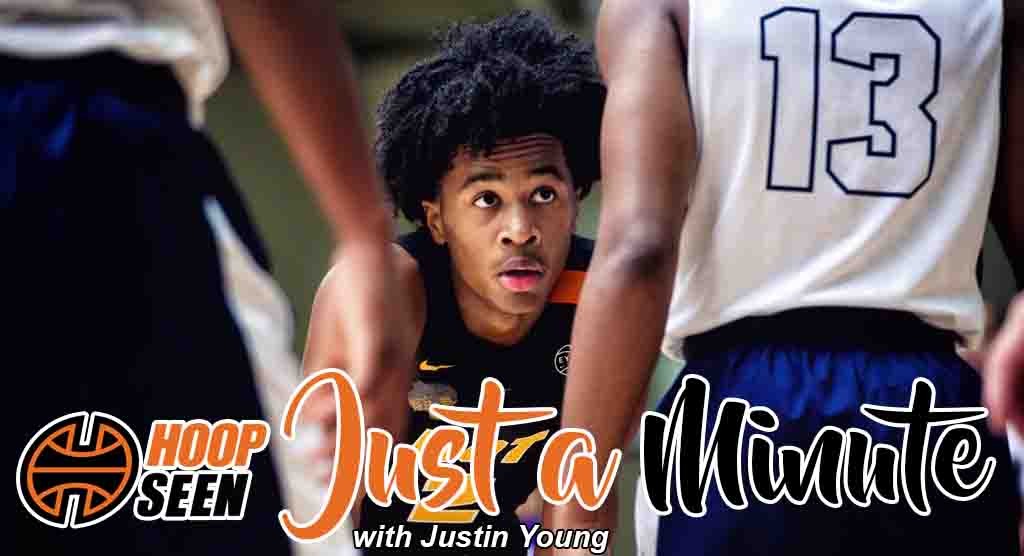 The high school and college basketball seasons all tip off officially this week and there is a lot to talk about and examine. In this week’s Just a Minute notebook, we look at the biggest stage to start the season in Atlanta, the best available big man in Georgia’s 2019 class, a commitment to watch, a 2020 rankings riser and a college sleeper.

TIPPING OFF WITH A BANG

The high school season in Georgia starts off strong with the Elite 8 Tip-Off Classic on Saturday at McEachern High School. The eight-game slate is chock-full of interesting match-ups. They are:

There are so many things to get excited about with this day. For starters, we have four of the best 2020 players in Georgia under the same roof for this one. The heavyweight battle of McEachern’s Sharife Cooper (pictured) and Holy Spirit’s Anthony Edwards caps off the night. The two are McDonald’s All-American candidates in the 2020 class.

There are 11 big men from Georgia’s 2019 class already committed to a college and as we draw closer to National Signing Day (Nov. 14), the demand for a quality big man increases for Division I schools.

The depth, to begin with, wasn’t incredibly strong for the senior class, regarding the Division I level. So, who is left? Who is the best available? After starring at our Georgia Fall Preview last month, the clear answer is Newnan’s Jatayveous Watson.

The 6-foot-6 forward can play inside and out and he just empties the tank. Jae Crowder was the same way when he played in high school. He had a good prep campaign but went relatively unnoticed by recruiters and media. The game has changed since Crowder was in high school (what year did he graduate?) and Watson is the beneficiary of a big stage like the Preview camp.

Each week in this space, we’ll take a look at a committed player and where they are going to college.

Bucknell came to Georgia and snatched up a terrific guard in Avi Toomer from Grady High School in downtown Atlanta. Toomer was our No. 13 overall player in the class of 2016 in Georgia. He should be an important player in the Bisons’s rotation this season.

The Patriot League school returned South, this time for one of the best big men in Georgia’s 2019 class. Wheeler’s Malachai Rhodes committed to the Bison on Sept. 19. He is incredibly consistent and skilled for his position. He knows how to play and stays within his abilities. I can see him starting for a couple of years in Lewisburg, PA. Academics were always going to play a big role in his decision for college and Bucknell scored a smart and productive big man.

We will unveil our 2020 Georgia player rankings this week. We already have a top 25 national ranking out (read them HERE).

One player who will make a strong debut on our 2020 rankings is Northview’s Matthew Davis. The 6-foot-6 wing player was outstanding at our Fall Preview. The junior is an exceptional shooter with length and some bounce. Northview hasn’t had a winning season since 2010-2011. Davis could help change that narrative this season.

Don’t be surprised to see him crack our top 15 for the state, in a class that is emerging as a pretty top-heavy and overall deep class.

I'm not one to read into exhibition stats but here is something to take note of regarding Florida State freshman Devin Vassell, a 2018 Peachtree Ridge graduate.

Over two games, he's played 32 minutes and scored 29 points on 11-14 shooting from the floor and hit 3-4 from three. He’s grown two inches and added 20 pounds, according to Florida State coaches.

Vassell was one of the biggest risers in the class of 2019 here in Georgia and he continued to grow throughout his final year of high school ball. He has Malcolm Brogdon type of character and a Jeremy Lamb type of game. That’s high praise, sure, but don’t be surprised to see Vassell emerge as a terrific long term prospect during his time in Tallahassee.

The Notes were thinking of redshirting him this season. They may not be able to do that. He could be too good to not be in their regular rotation.