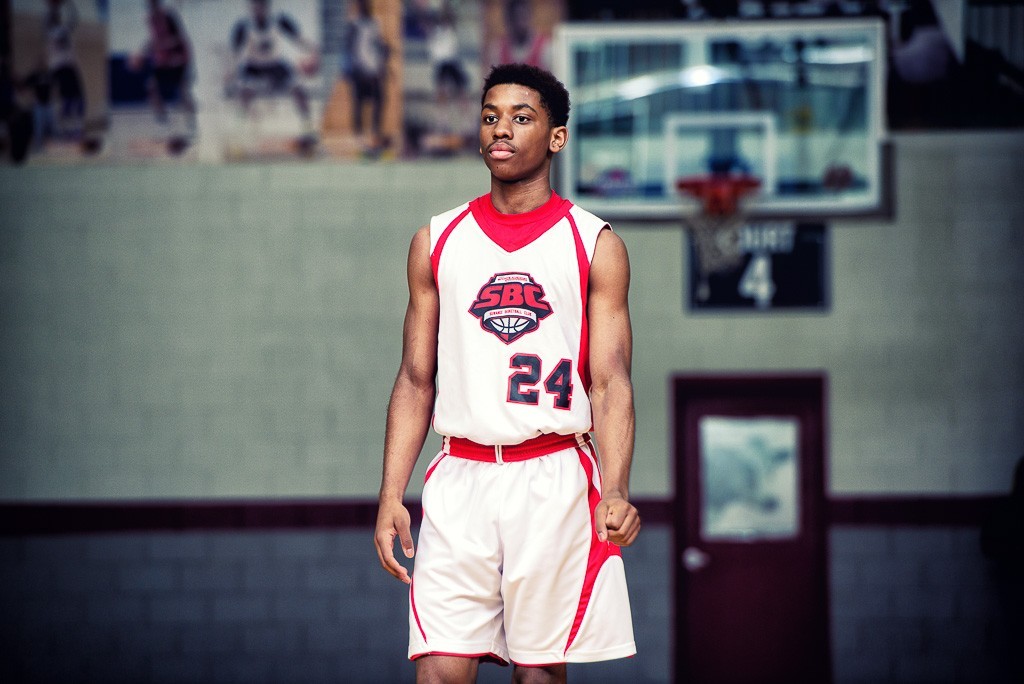 Everyone that follows high school, travel, college or professional sports has had a moment in which they dreamed about what pieces they would put together to form the perfect roster. Whether its fantasy sports or simply a discussion amongst friends, choosing who would fit on a roster is commonplace in today’s game. There were thousands of players that played at our HoopSeen event’s but we took on the challenge of picking the five that would start for us. The accolades, offers, and name on the jersey don’t matter in this discussion as we look to put together a team that we feel could compete against some of the nations best non-sponsored teams.

Over the past few years, there’s been a growing discussion over how the point guard position should be played. Some say the position is non-existent while others think that only nuanced players understand how moving the ball is apart of the job description. Nixon seems to agree with both sides as he brilliantly walks the line of both a scorer and facilitator. At our Best of the South, it was commonplace to see Nixon score 30+ points in a game, only to follow it with double-digit assists. With an off the charts IQ, I feel comfortable handing the keys over to the car and watching from the passenger seat. Nixon understands the importance of being an extension of the coach. There weren’t many times this season where I was left wondering exactly what play he was trying to make on the court. His high school coach is as well respected as anyone, and Buford is constantly in the mix come playoff time. Whether its practice or games its safe to say he's battle tested.

Having another savvy decision maker on the court is something that I place a ton of value on. Faster the game, the faster decisions have to be made. Ben Sheppard provides me with another backcourt playmaker that I trust to make the right decision. Something that could go overlooked about the 6’5 guard is his ability to affect the game without scoring. Chart how many times he grabs a rebound or makes the “one more” pass to keep his offense flowing. More than serviceable minutes at both guard spots increase his value as the defense can’t shift all 5 players to focus on one primary ball handler. One more player on the roster that willingly makes every pass on the court was something too enticing to pass up.

An obvious no-brainer right? Unarguably one of the best shooters in this year’s class, Devin Butts has been on the tip of the tongue of every HoopSeen writer since our first Georgia Cup. This long-range sharpshooter is the perfect outside threat to compliment His ability to be a defenses main focus on or off the ball was something to consider when putting this team together. It wasn’t far-fetched to see an opponent pick him up from half court or use the occasional face guard. Devin Butts was the perfect piece to open up some driving lanes while making teams pay for their lack of discipline.

Kaleb Coleman was the last piece that I added when thinking about a roster that could win me a ton of games between March and July. I needed a swiss army knife type of player that I felt like could fit seamlessly between a variety of pieces and still have an impact when called upon. Team M.O.A.M had their fair share of success at our events, much in part to the quiet worker's mentality of this 6’6 do it all forward. A Draymond-esque type of role is what I envision for Coleman as he is tough enough to guard players that outweigh or tower over him.

I would argue that Zach Morgan had one of the most impressive tournaments of any post player that played at one of our events this season. I noticed early in our Georgia Cup series that Zach was going to be the player that caused us to replace one of our rims at SSA. Dunk after dunk made me gravitate towards this 6’7 four-man that already had the frame of a tenured college player. What he brings to the table is a rim rocker that can anchor the paint on the defensive end. A non -stop motor partnered with some developing mid-range skill is enough to keep the ball screen game thriving. It’s essential not to get lost in the flash of guard play and make sure that you have a player that doesn’t mind getting his hands dirty.

Tai’s Team Breakdown: First of all, I love my skill level at the guard spots. I have three guys that can all dribble, shoot, and pass. Whatever we may lack in elite athleticism we will make up for in IQ, and decision making. 3 guys that can play with or without the ball is a coaches dream.  Kaleb Coleman and Zach Morgan are about as low maintenance as they come. That may be most essential given the fact my backcourt can carry my scoring load. They both can guard 2 or 3 positions, being both athletic and aggressive enough to carry the rebounding load. Everyone on this team has a defined job that they’ve proven capable of fulfilling.