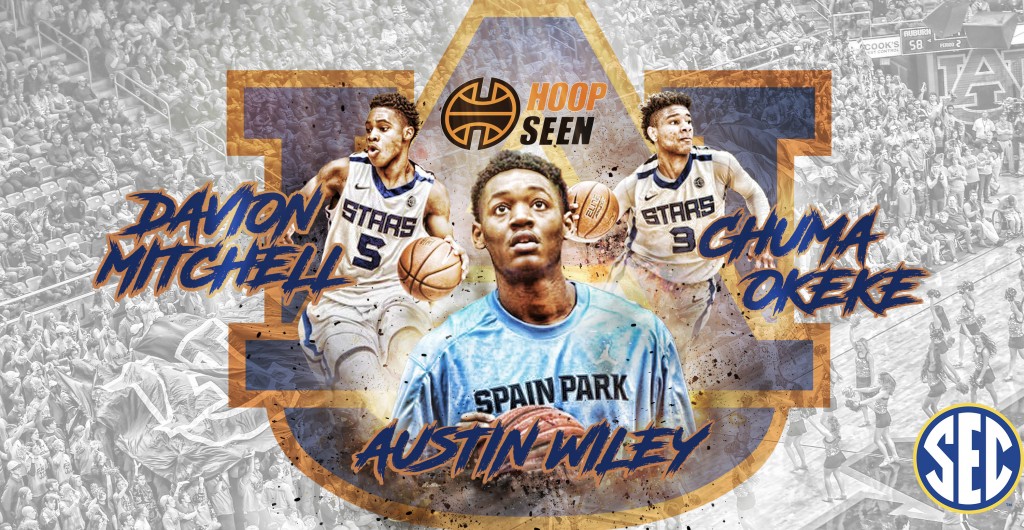 Over the past few years, SEC athletic directors have made it a point to improve the basketball league performance by going out and hiring big-name coaches. In turn, those coaches have delivered on the recruiting trail, bringing in high-level talent throughout the league.

While that is still the case with 13 of the 28 high school commitments currently ranked in the HoopSeen125, another storyline that has developed with the 2017 recruiting cycle in the Southeastern Conference is the focus on keeping in-state players home.

Auburn, Alabama, Arkansas, Texas A&M, LSU, and Mississippi State all did a masterful job of keeping their top talent within the state borders, as each of the aforementioned programs holds a commitment from a top-ranked in-state prospect.

Another unusual yet characteristic of this week is blue-blood Kentucky’s current commitment number: 0. Big Blue Nation, there’s no reason to be worried, as John Calipari and the Kentucky program are involved with a handful of guys that are expected to sign this week. They will undoubtedly finish at the top of the SEC and as one of the top classes in the nation, but it never feels right with them not having a pledge this far into the recruiting process.

Auburn, Alabama, and Arkansas open the first day of the signing period in the national top 25 behind their homegrown talent.

Auburn head coach Bruce Pearl made early statements prior to the travel season by locking up commitments from top 60 players Austin Wiley (29) and Davion Mitchell (57). Until Arizona’s recent surge on the recruiting trail, the Tigers held the top recruiting class in the country.

Wiley, a 6-foot-10 big man originally from Spain Park High School (AL) in Birmingham, is arguably one of the most impressive basketball prospects that will ultimately suit up for the Tigers. The Team USA gold medalist brings instant production to the post with his finishing and shot-blocking ability – both things that Pearl has lacked from post prospects since taking the reins on the Plains.

Wiley will also continue the family tradition of sporting the orange and blue, as his mother, Vicki Orr Wiley, was an All-American for the Tigers during her playing days, and his father, Aubrey Wiley, lead the conference in rebounding while on campus.

Wiley and Mitchell will be joined by versatile forward Chuma Okeke (34), a player that will fit in quite nicely in Pearl’s system.

Ben Howland was the talk of the SEC this time last year with his high-powered 2016 recruiting class. With only a few slots to fill in 2017, Mississippi State was able to land super-scorer Nick Weatherspoon, an immense coup as the 6-foot-2 standout brings a giant talent base and immediate production at the lead guard spot. He will be joined by super steady and efficient big man Garrison Brooks and athletic 4-man Keyshawn Feazell, both of whom should be able to contribute early on.

Alabama head coach Avery Johnson reacted well in response to rival Auburn’s class, as the second-year head coach picked up in-state commitments from Herb Jones (79) and Alex Reese (121), as well as three-star big man Galin Smith. Jones’ versatility and ability to play multiple positions make him a valuable asset at the college level, while Reese’s ability to stretch the floor at 6-foot-8 has basketball junkies drooling.

Nevertheless, one of the main storylines heading into this week is how Johnson will finish this recruiting class. In-state star John Petty (27) and talented Georgia point guard Collin Sexton (8) will both announce their commitments Thursday, and Alabama is heavily favored in both of their recruitments.

Arkansas has always done a phenomenal job of keeping its top players home, and Daniel Gafford may be the next great in-state player for the Razorbacks. The 6-foot-10 big man has consistently improved over the course of his high school career, with a possibility of being an NBA player one day.

Billy Kennedy continues to win the recruiting battles in the state of Texas, as all three of his Texas A&M commitments call the Longhorn state home. Savion Flagg, a 6-foot-7 sharpshooter from Alvin (TX), is the Aggies’ lone top 125 prospect coming in, but he is joined by solid pieces in three-star big man Isiah Jasey and three-star guard TJ Starks. Expect Texas A&M to bring in some more talented pieces to continue the momentum on the recruiting trail.

LSU targeted a couple of versatile, in-state forward prospects and were able to fend off other nationally relevant programs to keep them home. The Tigers were able to fend off Shaka Smart and Texas in defender Brandon Rachal’s recruitment, while they also were able to hold off Rick Stansbury and Western Kentucky’s recruiting momentum in the battle with Galen Alexander. Both should be solid pieces for Johnny Jones in Baton Rouge.

First-year Vanderbilt head coach Bryce Drew and his staff picked up three pledges from rankings outliers that should provide a formidable class for the Commodores. Saben Lee and Maxwell Evans provide help on the perimeter, while top 100 big man Ejike Obinna brings an immediate post threat to Nashville.

Ole Miss and Florida received some quality additions in both of their classes. Parker Stewart and Devontae Shuler will provide much-needed backcourt help for Andy Kennedy’s Rebels, while Jamarko Pickett is an under-the-radar pick-up that could become a notable steal in the next few years. Florida recently lost a commitment from top 50 guard Shai Alexander, but the Gators still have a solid group with DeAundrae Ballard and late-blooming sleepers Chase Johnson.