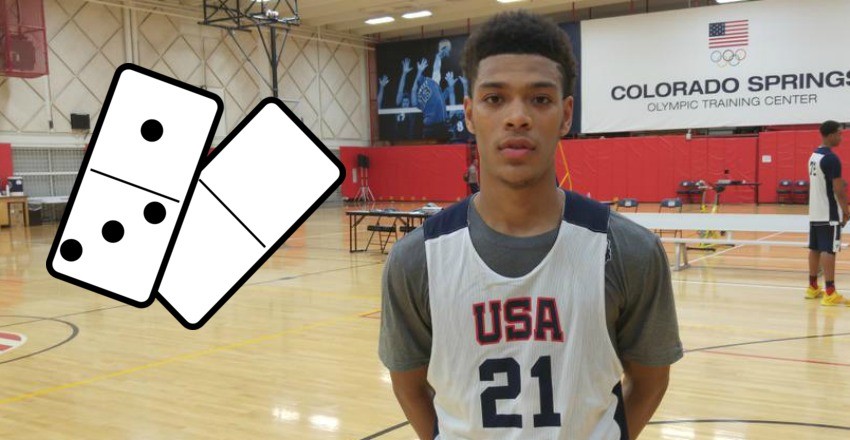 Premiering with our Domino Effect series, over the next few weeks, we will implement scenarios with where we see a specific recruit committing and what could ensue after. The recruiting world is all about the dominoes. When one guy commits, it not only affects the program that he has committed to, but also the various other schools that were recruiting him and other prospects at his respective position on the floor.

This time around, we bring to light the recruitment of Quade Green. The 6-foot floor general out of Philadelphia had an unbelievable spring and summer running with the PSA Cardinals bunch on the Nike circuit. One time seen as a score first type of guy, Green quickly remade his game as one of the best playmakers and facilitators in all of the land where, in doing so, shattered EYBL records via his assist rate.

Due to his phenomenal rise and willingness to be a floor setter, a near extinct asset in today’s game of basketball, programs such as Duke, Kansas and Kentucky jumped into the picture and dished out an offer to the Neumann-Goretti product.

Two weeks ago, Green narrowed his list to a final nine, a group consisting of Kentucky, Xavier, Duke, Villanova, Temple, Kansas, Arizona, Syracuse, and Louisville. When push comes to shove, many believe that this is a race between Kentucky, Duke, Syracuse, Kansas, and Villanova.

Let’s throw a scenario out: it is the beginning of September and Quade Green decides enough is enough and he commits to Jim Boeheim’s program. The Orange, who has not possessed a true lead guard that can create for others first before looking for his own since the Michael Carter-Williams days, lands an immediate presence at the 1. Where do the other four programs go when looking for someone to fill their needs at the point guard position? 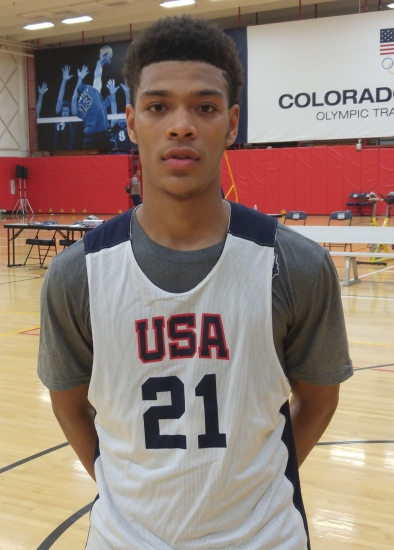 One of the most powerful brands in all of college basketball, John Calipari sure doesn’t strike out a lot when it comes to recruiting the best in the land. In missing out on Green, Kentucky’s primary target at the most important position on the floor continues to be Trae Young.

After grabbing De’Aaron Fox in the 2016 class, chances are that the Texas native is another one-and-done for UK. Isaiah Briscoe is still more of a scorer and so is Malik Monk, but relying on both could be obsolete as both could also be gone next fall. Hence, there will be another need for a point guard in the 2017 class. While Kentucky recently reached out to Nick Weatherspoon, the primary and top target for the Wildcats will continue to be Young.

The Oklahoma native, who is down to a final six which includes KU and Oklahoma, is seen to be favoring the Sooners and UK. While it will take great patience and resolve, expect for Kentucky to pursue even more hastily the sharpshooting and playmaking guard from Norman North High. Tremont Waters, a native of Connecticut and another top-50 prospect, could also see the attention ramp up for him coming from the program based in Lexington.

Just like Kentucky, Duke has been the leader for grabbing the top talent that each graduating class has had to offer. The Blue  Devils had some issues last college season and with the out-transfer of Derryck Thornton, the need for someone to come in and ready the squad through the various sets that Coach K orders, yet also look to score it when the opportunity presents itself, is evident moving ahead.

Landing Frank Jackson, a former BYU commit, should help fill the void this year but even with the McDonald’s All-American, he too is more of a score-first option at the 1. Furthermore, Jackson could have a year similar to that of Tyus Jones’ two years back and catapult himself into the NBA Draft. If this is the case and by the Blue Devils missing out on Quade Green, where else do they turn?

Well, they could get back into the picture for Trae Young. Kentucky and Oklahoma, as stated earlier, are the leaders for the five-star guard but if anyone can budge their way back into the scene, it is the Blue Devils. Outside of Young, maybe the staff in Durham takes a shot at Collin Sexton? The Peach State native is the best scorer in all of the 2017 class and while he isn’t much of a facilitator, he is a guy that oozes competitive juices and would be loved dearly by the Cameron Crazies.

Another to not lose track of is Tremont Waters, a sub-six foot guard that has grown nicely into the lead guard position. UConn and Indiana are heavy in the mix for the New Haven native, but Waters is a guy that has been known for winning a lot of games during his prep career and would welcomed heavily in Carolina.

If all options are extinguished, maybe the Blue Devils dance around a bit with nearby recruit, Matt Coleman. The top-50 guard is down to a final nine and while the ACC bunch didn’t make the cut, Coach K and his crew could overcome some of the obstacles in a blink of an eye, similar to their quick recruitment that landed top-50 wing Alex O’Connell.

The Jayhawks didn’t scoop up a point guard recruit during last year’s graduating high school class but the need this time around is present. The loss of Frank Mason upon his graduation will leave a massive gap at the point guard spot and while Devonte Graham will be able to slide over and run the spot without a ton of drop-off when it comes to defending the basketball and making shots, a back-up for the Carolina native is a desperate need for Bill Self’s group.

Weatherspoon will host the staff on September 16 for an in-home visit and while both are scorers of the basketball rather than pass-first types, the same could have been said for Frank Mason before he hit the Lawrence campus a few years back.

Mississippi State and NC State are seen as the leaders for Weatherspoon, where the former program is the place that his brother currently suits up at. Sexton will visit NC State this weekend for a visit while Alabama has received the most talk to date. However, KU will get an official visit out of the elite scorer of the ball next month.

Tremont Waters is another candidate for the Big 12 gang and while they do hold a commitment from a capable fill-in with top-100 senior Marcus Garrett  the need for an immediate contributor that can run an offense is there.

Let’s not forget about Trevon Duval, the top point guard prospect in the 2017 class. He recently narrowed down his list to a final 10 and while there has been talk about the Delaware native opting to play overseas before heading to the NBA, KU could ramp up their attention with the We R1 product and thus, land a top-10 recruit in a blink of an eye.

The defending national champs, Villanova has actually already missed out on its top target at the lead guard position back in June. Once leaning to making a commitment to Jay Wright’s squad, Chris Lykes, a top-100 speedy guard for the DMV, flip-flopped and at the last minute, gave his verbal commitment to Miami. Thus, the Wildcats have been going back and forth on who is worth being pursued. The need for a point guard for next year is ginormous as they only boast one at that spot on the floor, that being Jalen Brunson, and even he could be gone to the NBA Draft if he were to have a breakout campaign this winter.

Sure, Phil Booth might be able to slide in and play some point, but with Jay Wright being known a  a lover of the four guard lineup, the Philly based program really needs to strike this fall in landing a point guard target. They are involved for Collin Sexton, though landing the Georgia native might be a stretch. Where else might they look? They recently made the final list for five-star point guard Trevon Duval and next to UCLA, Kansas, and Maryland, the Big East juggernaut might have the best shot at landing the local recruit.

Villanova is also heavily in the mix for Darryl Morsell, a 6-foot-4 guard from Baltimore that has grown more into the point guard position. He might not be the facilitating floor general that Green is, but neither is Trevon Duval. Losing out on Quade Green might sting the defending champs the greatest compared to the others in the mix but then again, Wright and his staff have been one to concoct crazy personnel lineups and still come away with winning over 30 games in any given season.