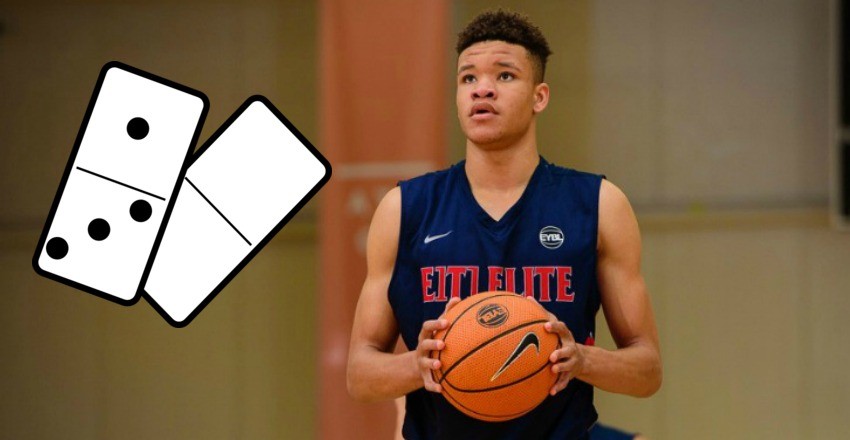 Debuting our Domino Effect series last week, we indulged on what could be with Quade Green, a top-25 guard that is down to a final nine. We selected Syracuse as his future home and played out possible options that his other suitors could pursue in the weeks ahead. This time around, we will take a look at another blueblood recruit: Kevin Knox, a 6-foot-8 combo forward from the state of Florida.

There has been little pub or talk of late surrounding Kevin Knox, something that is a bit odd when compared to the rest of his elite peers. However, the buzz in the past and up until this point surrounds four programs that are heavily in the mix with the Tampa Catholic star as UNC, Kansas, Florida State, and Duke are strong in the hunt.

Where both of his parents earned varsity letters at Florida State during their own collegiate playing days, the Seminoles are in a good spot for him. Leonard Hamilton has been known for getting and keeping the best talent within the state’s borders as he already carries commits from three of Florida’s best in the 2017 class. However, we are going to play out this scenario in favor of the Duke Blue Devils. Coach K and his core in Durham land the five-star forward where he will likely replace quick one-and-done campaigns out of stud freshmen Harry Giles and Jayson Tatum in the frontcourt.

Where might others such as FSU, UNC, and Kansas look next? We investigate. 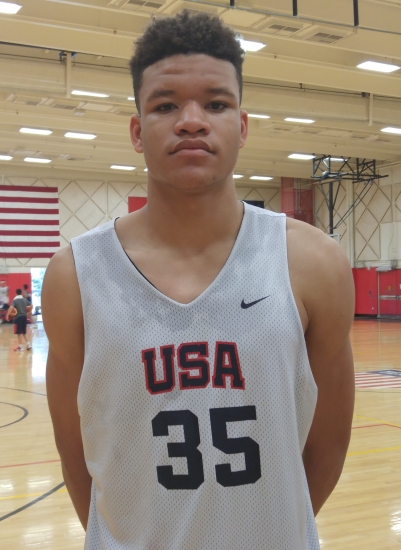 OPTION B: TRY AND GET BACK INTO THE MIX FOR TYLER POLLEY

Kevin Knox would be a phenomenal add for the ACC gang as Hamilton and his crew can sell the fact that they can develop guys swiftly in order for immediate entry into the NBA Draft. Recruiting top notch prospects has never been an issue for the staff in Tallahassee and after securing the commitment of five-star 2016 forward Jon Isaac, selling Knox on replacing the potential one-and-done is something that might excite the local recruit.

However, by Knox committing to Duke, FSU is not all lost and out in the dark. They have already put together a top-25 recruiting class within the 2017 ranks and hold two commitments from top-125 combo forwards RaiQuan Gray and Wyatt Wilkes. While the swing and miss on Knox will still hurt, they have already filled the spots on the roster come next fall with Gray and Wilkes.

Where might the Noles go next? Most likely, look for Florida State to either add another big man down low that can protect the basket but also guard a ball screen appropriately, or add a capable shooter, someone that can extend the defense with the 3-point jumper.

Tyler Polley comes to mind as a capable combo forward that can stroke it from 15-feet and out and while UConn and Tennessee are involved heavily and the Seminoles didn’t make the final five for the in-state recruit, the E1T1 product and teammate of Knox’s also has bloodlines that lead back to the ACC program. Hence, Polley might be the most favorable avenue for Leonard Hamilton’s program to chase after in missing on Knox.

Outside of Polley, another nearby recruit that can be leaned upon for his shot making skills from 15-feet and out comes in the form of MJ Walker. The 6-foot-5 swingman has become a steadying presence on the wings of the floor and while Maryland, Ohio State, and KU are also involved, expect for the program down in Tallahassee to ramp up their attention towards the Jonesboro High standout.

If those two options fail to suffice, FSU has been known to raid the junior college ranks every year for a piece or two as they could follow a similar trajectory in finishing out its 2017 class.

The program that may need Knox the most is UNC. The Tar Heels will lose Isaiah Hicks due to graduation this spring and with Justin Jackson, a 6-foot-8 junior small forward, potentially leaving for the NBA Draft a year early, there will be some major holes that must be filled in Chapel Hill. Knox would fit like a glove at the ACC blueblood but in selecting the Tar Heels’ nearby rivals, where else might they look?

Roy Williams and his staff are already all on board with PJ Washington. The Findlay Prep big man is one of the best rebounders in all of America but is more of a small-ball power forward, rather than a combo type that Kevin Knox is. UNC is deep in the hunt but UNLV and Kentucky seem to be the favorites for the Texas native, though the Tar Heels would love to add both five-star forwards to their 2017 recruiting class.

Outside of Knox, they could keep their fingers crossed in luring Kris Wilkes to campus next year. The 6-foot-8 forward is quite possibly the most similar to the Sunshine State native due to their positional versatility and developed ball skills out of either forward spot. Then again though, the ACC club is fighting an uphill battle for the Indiana native as Xavier, UCLA, and Indiana are more likely to receive a signature out of the top-20 forward.

Having already added two pieces in the backcourt with sharpshooting off guard Andrew Platek and athletic, top-75 combo guard  Jalek Felton, maybe the UNC staff goes a different direction. They decide to put everything in the basket with Brandon Randolph in luring the top-50 swingman to Carolina and then add a piece or two within the interior where they recently have begun to ramp up their attention on 15-feet and in big men Garrison Brooks and Brandon Huffman. Mohamed Bamba is still out there for the taking, though the recruiting process is just beginning with the top-five recruit out of New York.

Man, what a sell Kansas has to offer Kevin Knox? Three years ago, it was Kelly Oubre. Two years ago, we had Andrew Wiggins cover the small forward spot. This year, we have Josh Jackson at the same position on the floor. How would it feel to be the replacement for possible back-to-back first overall picks in the NBA Draft and more importantly, three straight lottery picks? That is quite difficult to say no to but in this hypothetical, Knox does just that. Where does KU then go in replacing its future one-and-done? There are a plethora of routes the Big 12 juggernaut could go as Jarred Vanderbilt might be the guy that they zero in on.

A 6-foot-8 jumping jack that is more of a four-man than three, Vanderbilt is one of the best offense starters in all of America. Just like Knox, the Texas native has an elite first and second leap around the basket and on the glass but his jumper remains a hiccup within his game, something that is lagging behind when comparing the two. KU is right there with the Victory Prep star, though there are a few others that are involved, too.

Just like UNC, Kansas has remained in the hunt for PJ Washington but asking the Findlay Prep star to play primarily out on the perimeter would be an issue, at least straight out of the gates. The Jayhawks also made the final four for Andre Rafus, a slender bodied shooter from the east coast, though landing the Baltimore native is a question mark at the time being. Cody Riley has remained in contact with Kansas as the four-star power forward has favored the Big 12 bunch for a while now, though UCLA has an upper-hand with the west coast recruit.

Going down the options even further, Deng Gak, the younger nephew of Luol Deng, has included Kansas within his final five but again, the Blair Academy product is more of an interior, 15-feet and in big man, rather than a small forward. Mohamed Bamba is still early in the process where KU good jump into the picture and become the leader for the New Yorker in a blink of an eye, though, he too, like Gak, is more of a high post and in frontcourt recruit.

Hence, after sifting through all of the forwards on the KU board, two that might be an immediate contributor would be Brian Bowen and Billy Preston. Bowen, a 6-foot-7 small forward and one of the best shot making wings in all of America, is a type of guy that Kansas has not had in some time now. While he will give up some size, athleticism, and versatility to Knox, he does bring a better shot making presence from off the perimeter. Preston, a 6-foot-8 combo forward type that is down to a final four, has been seen as a USC lean for a while but by Knox committing to Duke, KU jumping more hastily into the picture for Preston, would not be surprising whatsoever.