Top newcomers to the updated 2017 HoopSeen125 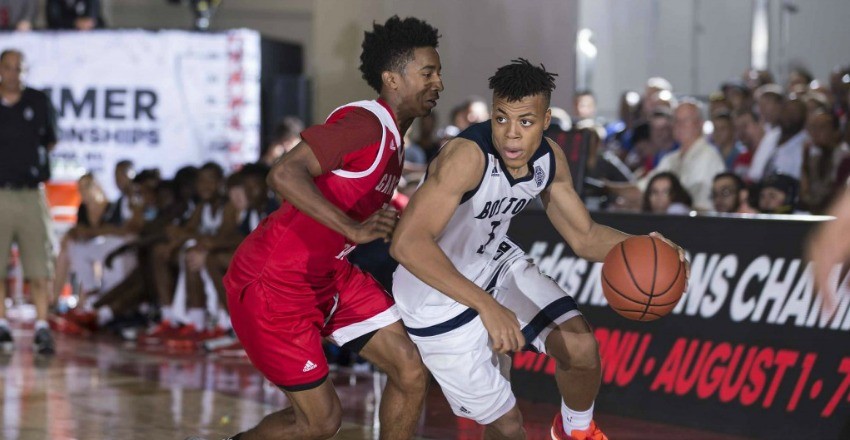 Releasing our new 2017 HoopSeen Rankings, the names at the top may not have changed much, but there are a few new ones on the list. The likes of Darryl Morsell, Wabissa Bede, and Jericho Sims are just a couple of the names that enhanced their stock this past summer where they took their games to the next level, showed consistency on the playing floor, and displayed further upside and potential as to where they could be moving ahead. We take a look at five of the top newcomers to our rankings and a few others that jumped into the mix.

The top breakthrough performer for the new 2017 HoopSeen Rankings, Darryl Morsell enters the fray at the number 55 spot. A 6-foot-4 guard out of Baltimore, Maryland, the Team Melo guard began the spring coveted by the Dayton Flyers and a slew of others A10 schools and programs nearby, yet his ascension created for quite the battle of heavyweights for the DMV recruit. A super explosive guard that can play all three spots in the backcourt, Morsell is a premier playmaker that values the basketball, can make shots from the mid-range, and due to his savvy and composure on the hardwood, is a soothing presence for the rest of his teammates. Best placed at the lead guard spot, Morsell can defend different spots and because of his excellent basketball ceiling and hard-working nature, he may not be as high as he might be within our rankings come the spring. Down to a final five of Notre Dame, Maryland, Virginia Tech, Dayton, and Villanova, Morsell more than earned his spot within recent update.

Maybe it was our own wrongdoing or the fact that Jericho Sims has become that much more consistent and productive in past months, yet the D1 Minnesota star more than deserves his inaugural placement within our 2017 rankings. A 6-foot-9, long and bouncy bodied big man, Sims is a demon on the glass where, by way of his quick leaping skills, hands, and motor, the Minnesota native can do some damage without having a single play called for him. However, when he does get a set ordered for him, the senior big man can score on hooks over the defense and on face-up, baby jumper moves. While he doesn’t look the part of a strong and physical big man, Sims has some innate strength to him in guarding the basket and with mountainous upside to him, might not be done escalating our rankings.

He began garnering some positive pub back in June at the NBPA Camp, furthered it in July, and in my last viewing of the 6-foot guard out of New York last week in New Jersey, Isaiah Washington more than cemented his case as a top-100 guard nationally. A blue-collar dude that oozes NYC toughness, the senior guard has the strong frame in taking contact appropriately and the ankle breaking handles that allows for him to get wherever he might with the rock. While he can still have issues with his shot selection and decision-making, there is always a need for a street tough guard that can run an offense and when needed, go out and get a bucket for you, just as the New Heights product can do at any given time.

No one had a better final week of play in July than Wabissa Bede. The 6-foot-2, compact and strong combo guard, put up prolific performance after prolific performance as the Mass Rivals product more than boosted his stock within the eyes of the college coaches and scouts in attendance. Sometimes thought of as Makai Ashton-Langford’s side-kick, a top-60 guard within the 2017 class, Bede more than displayed his own value as a top-100 recruit. Someone that loves physicality on the playing floor, can make shots from all three levels on the floor, and breathes fire that would singe anyone within his way, the Cushing Academy star is one of the most consistently hard playing guards in all of America, someone that plays with a chip each time he laces his sneaks up, where he is down to a final five of UMass, La Salle, Minnesota, Virginia Tech, and Butler.

Yeah, he looks the part and is beginning to play like it on a consistent basis. Victor Bailey Jr., born from great bloodlines as his mother, Tonja Buford-Bailey, is a three-time track and field Olympian, and his father, Victor Bailey Sr., was a second round pick in the NFL Draft awhile back, is quite the athlete himself. While he has been nicked for his shaky jumper in the past and though it remains a work in progress, the RM5 Elite guard has gotten much better at hitting the pull-up off of the elbows of the floor while remaining the same old self as a premier leaper at the basket. A mature, intellectual kid that is still a bit close to vest with his recruitment, the Lone Star State native gets his named placed within the top-100 of our rankings for the very first time, a reflection of how well he played this past July and the extra upside that he presents on the court.