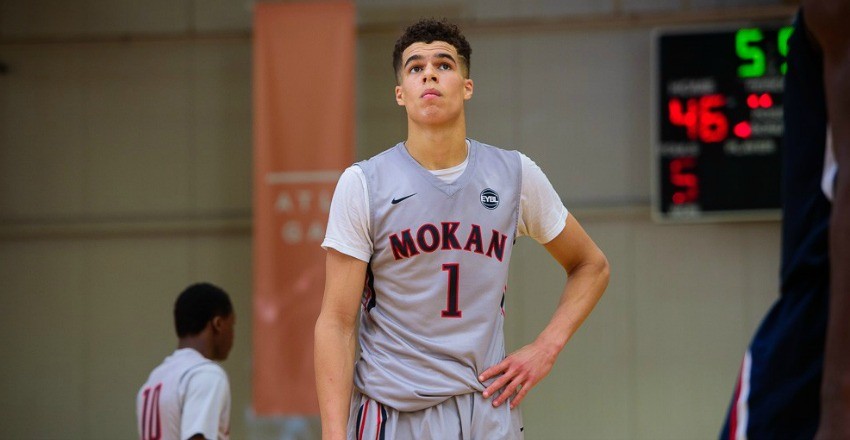 In releasing the new and updated version of the 2017 HoopSeen Rankings, a list that we will keep in this particular form until November as we will retabulate before the beginning of the high school season, we break things down even further and give a recap on what really is included within them.

Of the 125 prospects included within our rankings, 34 of which are already committed to college. The highest being Michael Porter Jr, a 6-foot-8 small forward that has verballed to the University of Washington, a program that recently hired his father as an assistant coach and where his younger brother, 2018 top-100 forward Jontay, is already committed to.

Breaking things down by conference affiliation, the SEC leads the way with seven total commitments. It is pretty important to note that the SEC is already in front and is led by two football-brand schools in Arkansas and Auburn where Kentucky, a program known for being the top talent getter each year, is nowhere to be seen as they typically secure the best of the best later on in the year. The Big East and ACC trails directly behind the SEC with six commitments thanks to the work that Xavier and Creighton have done for the Big East with the latter having six separate programs represented within our top-125.

Auburn is the frontrunner carrying the most commitments amongst our top-125 where they actually hold three, top-60 commitments. Austin Wiley, a burly and skilled big man down low, leads the way, followed by Chuma Okeke and Davion Mitchell. Bruce Pearl has done a tremendous job of keeping some of the top talent from the southeast close to home and landing the trio early on should bring even further success in the years ahead.

In all, there are 32 states included within our newest update, to go along with Canada and Washington, DC.  Florida and Georgia lead the way with 12 prospects ranked a piece. The southeast is absolutely loaded which should lead to success within the SEC and the ACC due to the geographical niche of each conference. Virginia and Texas follow right behind the two states from the southeast, though the former has to thank the various prep programs and more importantly, Oak Hill Academy, for the infusion of talent into its state’s borders.

While Indiana doesn’t have a ton of depth, the state does have major star power. Whether it is because of the prospects brought into the doors at La Lumiere, or homegrown talent, the state does showcase six prospects within the top-33. The state of Georgia isn’t far behind as they see six of the top-40 coming from within its own borders.

The top newcomer to the mix is Darryl Morsell. The 6-foot-4 guard has had quite the summer where the Baltimore native has improved athletically and furthered his ball skills where he can now be used as a point guard in spurts. A humble kid off the floor with major upside on it, the Team Melo prospect begins at number-55 within the 2017 HoopSeen Top-125, a spot that he could surpass even further this winter. Not far behind Morsell is Jericho Sims, a 6-foot-9, bouncy and active power forward from Minnesota, who slots in at the number-58 overall spot.

Of those that were amongst the past rankings, it was Kimani Lawrence that has taken the biggest jump. Originally at 89, the Expressions Elite star answered a lot of the questions pertaining to the small forward, the most obtrusive being his activity and ability to stay healthy. Lawrence did more than just answer each of these where he played with a mean streak all summer long, showed off an accurate jumper from deep, and the ability to protect his basket. Now slotted at number 45 overall, Lawrence took a 44 spot leap, well warranted by his impressive few months on the travel circuit. Not far behind him in making a giant jump is Alex O’Connell, a 6-foot-5, bouncy and scoring wing out of the state of Georgia, who has gathered over 30 high-major offers and now sits at the 36 spot, taking a jump of 35 slots from his original position at 71 overall.