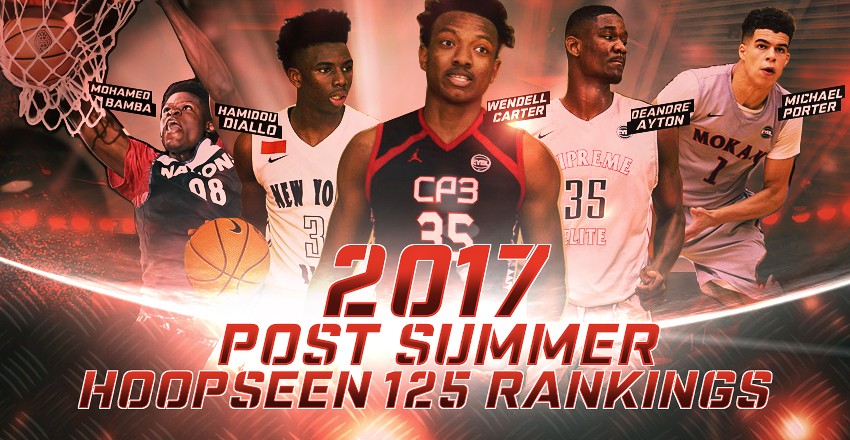 The debate as to who the best prospect is in the 2017 class will go on for the next few years and for us, the answer was not an easy one. Conversations will not stop whenever these seniors graduate from high school but rather when their professional playing days are over with.

However, we do our best in taking a stab at who we believe is the best and in this particular year, we stuck to our guns and hold Atlanta big man Wendell Carter at the top of the list.

A 6-foot-10 big man with a polished back to the basket game,  former Carter is a guy that can have an offense be run through him on the block, a dying breed in today’s new era of basketball. The Peach State native can score the ball over either shoulder, face-up and hit the mid-range jumper, and make the proper pass out of the double-team.

He was a catalyst down low at the U17 World Championships this past June in securing the gold for his USA squad and more than dominated his peers on the Nike EYBL circuit. Running with the Team CP3 bunch, Carter shot over 70-percent from the field while scoring over 16 points and securing 10 boards per contest. Likely to end up at either Duke or Harvard, Carter is the best that there is in 2017 and one of the most sure-fire bets in all of high school basketball.

Falling right behind Carter and nipping at his heels is DeAndre Ayton. Perceived by most as the top prospect at the prep level, Ayton is a concoction of explosiveness, an NBA ready body, ball skills, and an evolving mean streak that makes him a difficult stop from within the half-court.

While some have blasted the Bahamian native in the past for his shaky motor, Ayton disputed this greatly with his play in July as he dominated some of the top competition that he faced off against at the Nike Peach Jam and at the adidas Nations. Ayton averaged over 19 points and 11 rebounds off of over 60-percent shooting from the floor in EYBL play where he has the looks of a long tenure in the NBA but beforehand, will likely end up at either Kentucky, Kansas, or Arizona next fall, that is if college would be in the plans for him.

Coming right behind him and the first committed prospect at the time being is Michael Porter Jr. The 6-foot-8 bouncy wing brings great size onto the perimeter along with a pure shooting stroke that extends the defense out further away from the basket than just the 3-point arc. Already a gold medalist on the U18 USA squad this past July, the Washington Huskies commit is one of the most difficult shot makers in all of the land but also is a major presence on the glass. During his own time spent on the EYBL circuit this past summer, Porter accumulated mind-boggling numbers of over 22 points, 11 rebounds, and two assists per contest. A versatile, widespread producer, Porter is ready-made for the new era that basketball presents at the moment and should thrive during his time in the Pac 12 and beyond.

In most other classes, Mohammed Bamba would get the easy nod as the top prospect in all of his class nationally. However, with an unbelievable treasure of talents within the top of this respective crop, the 6-foot-10 center comes in at No. 4. The PSA Cardinals center shows off a 7-foot-11 wingspan, along with the dexterity and mobility in protecting his basket. Bamba is terrific in guarding a high ball screen without finding himself out of position. Bamba may have the best upside out of anyone in his class. His offensive acumen is still a bit behind his defensive skills however, Bamba is a major pest around the basket where he can score over his left shoulder on the block and uses his length and soft hands to put a large dent on the weakside glass.

Rounding out the top five of our newest update is Hamidou Diallo. The 6-foot-5 wing is one of the most explosive athletes in his class. The top guard prospect that has vastly improved his ball skills in recent months but still has remained his same old self out on the break as a scorer at the basket, the potential of the Putnam Science star is pretty special. Averaging over 18 points, five rebounds, two assists, and nearly two steals per game, Diallo is a stat sheet filler and with his passion on the playing floor always in line, the NY Rens star deserves his dues here at the No. 5 overall spot in the 2017 rankings.