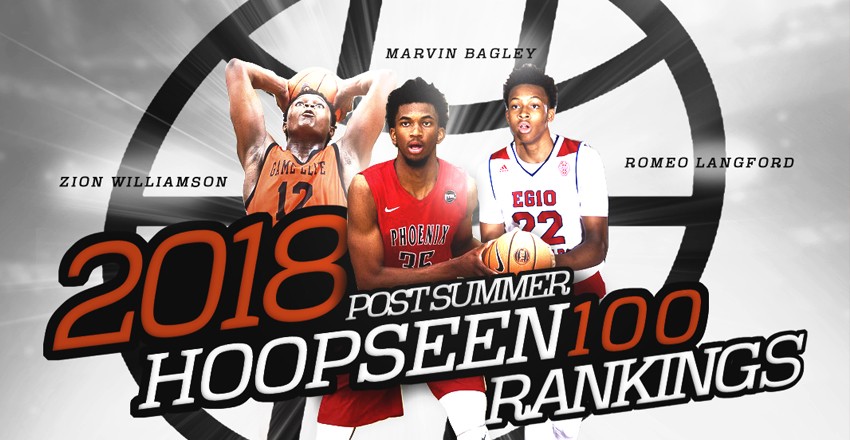 There has been much talk about the class of 2018 and the lacking crop of premier talent atop of it. After such promising talents as Wendell Carter, DeAndre Ayton, and Michael Porter supplanted themselves as the faces of the 2017 class, there isn’t an extreme argument as to who could put up a fight with Marvin Bagley III as the number one prospect within the junior class. Now decompressed and getting the chance to figure out where everyone belongs, we bring to you the updated version of the 2018 HoopSeen Top-100 Rankings, a class led by, with you guessed it, Marvin Bagley.

What more is there to say about Marvin Bagley III than dominant? The 6-foot-9 power forward is an unbelievable prospect that brings great upside, current production, versatile ball skills, and improved defensive abilities that make him elite among just an mediocre class. The lefty has some Chris Bosh to him where he works well facing the basket out of the short corner regions of the floor, yet is comfortable enough in putting the ball on the floor from off the perimeter. His toughness has improved and in the meantime, his numbers on the final stat sheet display just how good he is where, after playing a year up on the Nike EYBL circuit this past summer, averaged nearly 21 points, 11 rebounds, and two blocks per outing. Down to a final six of Kentucky, Duke, Oregon, Arizona State, Arizona, and UCLA, Bagley is the best that there is and best that there can be in the 2018 class.

We talked briefly about the abundance, or lack thereof, of prospects that could give a fight for Marvin Bagley as the top overall prospect within the 2018 class. If there is one guy that could make a run for the top dog status, it is Zion Williamson. The 6-foot-7 forward out of South Carolina may be the most consistently productive ball player in all of his class. Regardless of the type of opposition that he has faced off against, the Spartanburg Day School star has dominated through sheer physicality, deceptive ball skills as a playmaker in the frontcourt, to go along with a killer mindset that is always in place. During last month’s adidas Nations, an event bringing in some of the top amateur basketball prospects to one setting, Williamson answered every question about him as he missed just one of his first 22 shots from the field. Drawing comparisons between Larry Johnson and Draymond Green, Williamson is an elite, top tier producer and ballplayer in 2018, landing himself at the number two overall spot.

The top perimeter prospect enters the mix at number three overall as Romeo Langford takes a seat within our rankings. A super versatile wing that can score it and rebound the basketball in heavy amounts, there isn’t a better offensive weapon from off of the perimeter than the Indiana native. The EG10 star can drop 25 points without breaking a sweat as he can convert from all three levels on the floor and is one of the most polished prospects that his class has to show for itself. The one hold-up with Langford is his consistency on the playing floor. He has become known for throwing up a 40-spot on the scoreboard and then following it up with a dismal affair. Urgency and engagement are needed but as he matures, the five-star wing is an easy top-five prospect and one that sits at number three overall in the updated HoopSeen Top-100.

Following up the first perimeter prospect is the first lead guard recruit as Javonte Smart sits at number four overall. The Louisiana native brings ideal size to his position standing over 6-foot-4 along with the frame and body that should enable for great strength gain in the coming years. Having played up on the 17U level on the travel circuit since he was a freshman, Smart is not one to back down from the big moment or physicality on the playing floor. A hard driver of the basketball and someone that can be seen as the best on-ball defender in his class, Smart got the starting nod for the USA U17s this past June and was a primary reason that his squad immediately set the tone in Spain leading to a gold medal. His upside isn’t as good as those above him but his immediate production on both ends is evidently clear with the Scotlandville High star.

Filling out the top-five of the updated HoopSeen Rankings is Immanuel Quickley, a jet quick lead guard from Baltimore. The 6-foot-3 floor general is remarkably good off of the high ball screen, putting tons of pressure on any type of defense off of the downhill drive to the basket. Just like Smart, Quickly captured gold in Spain two months back but also like his 2018 peer, has issues making shots from outside of 15-feet. A hard-worker on and off the floor with an escalating skillset, one would have to think that the John Carroll star would smooth out this minor hiccup in his game, creating for even great matchup issues on the hardwood. A top of the line playmaker and competitor, Quickley could rise even higher in the next update if he can show that he can make the open jump shot when needed.