Who the coaches watched at Holiday Hoopsgiving 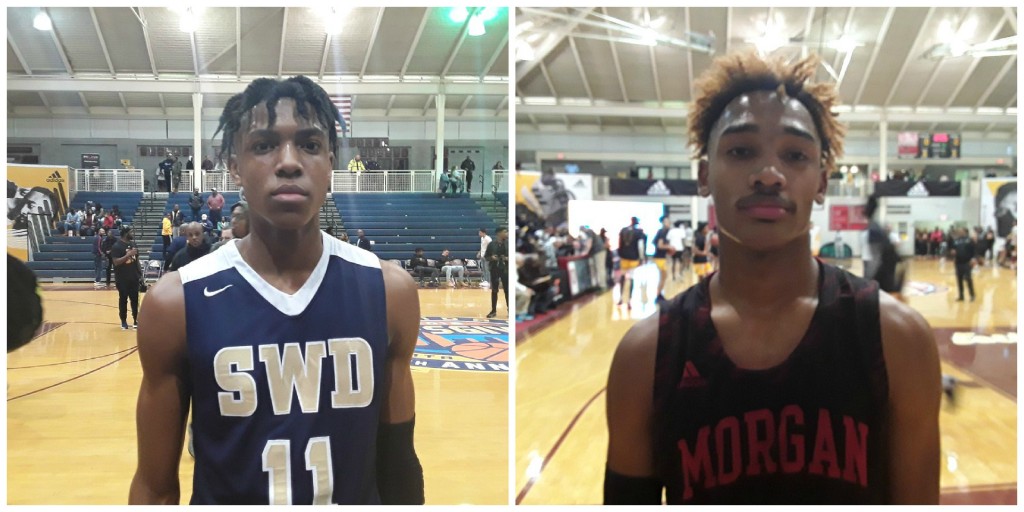 With Holy Innocents being the stomping ground for many of the countries best, coaches from all over made Thanksgiving break plans to check out Holiday Hoopsgiving. Some offers were given out while other coaches made sure to make an apperance. Today we take a look at some of the players coaches watched.

My last viewing of James Glisson III of Southwest Dekalb was the final pre-season tune up against a tough Tucker team, featuring Dartmouth signee Nathaniel Ogbu. It was a tough outing for the 6’6 senior, but he has since shaken that one off to show off what many low majors have come love. This rim rocking force was able start the break, rebound, and knock in mid-range shots despite giving up two to three inches over his division one matchups. There’s some sharpening of his tools to be done but he continues to be one of the better available forwards in the Peach State. Presbyterian was in to watch, as Georgia Southwestern extended an offer as well.

Barclay Radebaugh liked enough of what he saw in Morgan County guard Tyrin Lawrence to offer him a scholarship to Charleston Southern. Lawrence had early suitors in Austin Peay and Georgia Southern, but somehow managaed to slip through the early signing period. Charleston Southern has had a ton of recent success with those mid-rated prospects out of Georgia, with guys like Christian Keeling putting up triple double performances. A semi-productive summer for the Atlanta Celtics caused Lawrence’s interest to waver a little and he even tumbled in our rankings to outside of the top 30. His junior year was littered with mid to high major interest and many of those programs took their offers in other directions. There may be some similarities to Lawrence and Keeling, as Keeling was once rated as the twenty-second best prospect in our 2016 Georgia rankings. His name has been circulating well for some time now, but I will continue to watch this one closely to see if other programs get involved. Lawrence remains as a steal for the second semester.

The rise of Eugene Brown: No one took advantage of this national stage quite like that of Southwest Dekalb guard Eugene Brown. His two-way performance was one to remember, despite the number of high profile prospects to step through Holiday Hoopsgiving. Seven made threes showed his ability to stretch the floor at a high rate, leaving little doubt to his ability as a shooter. There's no reason to pidgeon hole him as just a spot up shooter as he showed the ability to knock down jumpers off the bounce. An added bonus is his length and athleticism allows him to be an above average rebounder for his position. Tough defense against a five star prospect in Brandon Boston helped show off a ridiculously high ceiling as a two-way player. If there was any question about how much talent was in Georgia’s loaded 2020 class then chew on this. As of right now we currently have Brown slated as the eighth ranked prospect, right behind his backcourt running mate K.D Johnson.

A national profile is brewing for Brown as his story added another chapter at Hoopsgiving. With a row off coaches watching, Kennesaw State and Xavier extended offers joining Clemson, MTSU, and Georgia Tech to name a few.

2020 G Eugene Brown continues to elevate his game to new levels after every outing. Lockdown capabilities and high level shot making were consistently shown by the 6'5 high potential prospect. Expect more high majors to throw their hat in the ring soon pic.twitter.com/u14AJFzn0r

Josh Pastner and Bruce Pearl were both front row as they soaked in the upside of DME Sports Academy forward Moussa Diabate. A great blend of both size, skill, and feel was on display as the 6’10 forward showed good instincts when operating from block to block. Given his length and defensive timing, Diabate was one of the better two-way forwards in attendance.

Rick Byrd and assistant coach Brian Ayers checked in one of their three signees in the 2019 class, as Greater Atlanta Christian guard Ben Sheppard took the floor. Sheppard’s ball skills and feel are what landed him on the radar of one of the Ohio Valleys powers as they have a track record of squeezing the most out of similar prospects.

Assistant coach Doug Stewart watched closely as Tulane recently extended an offer to GAC guard Hunter McIntosh. There were times that McIntosh’s shot didn’t drop but that talent he has is evident as a division one talent. McIntosh guarded all five positions and would often start the possession guarding the other teams best post threat. Jacksonville State and Charleston Southern were also in attendance to watch McIntosh pick up his shooting more in the second half. With several guards getting snatched up in the early signing period, McIntosh remains a viable option for programs going forward.

Georgia State, and Tennessee Chattanooga peeked in on The Heritage School 2020 guards Kasen Jennings and Connor Thompson. They have been two names that have been a constant amongst mid major programs throughout the fall. Kennesaw State made themselves the first to offer Langston Hughes freshman point guard Kobe Davis.

A player that who’s bandwagon I’ve jumped completely on is Greenforest combo guard RJ Noord. It’s for good reason too as the 2021 guard continues to show a very high ceiling during every outing. A knack for scoring while balancing distributor responsibilities has landed him on some watch lists. Xavier has decided to get involved with him early as they extended an offer after day two’s action.

We've documented the recent rise of Holy Innocents guard Chance Moore. Take a look at his rise from this past weekend.