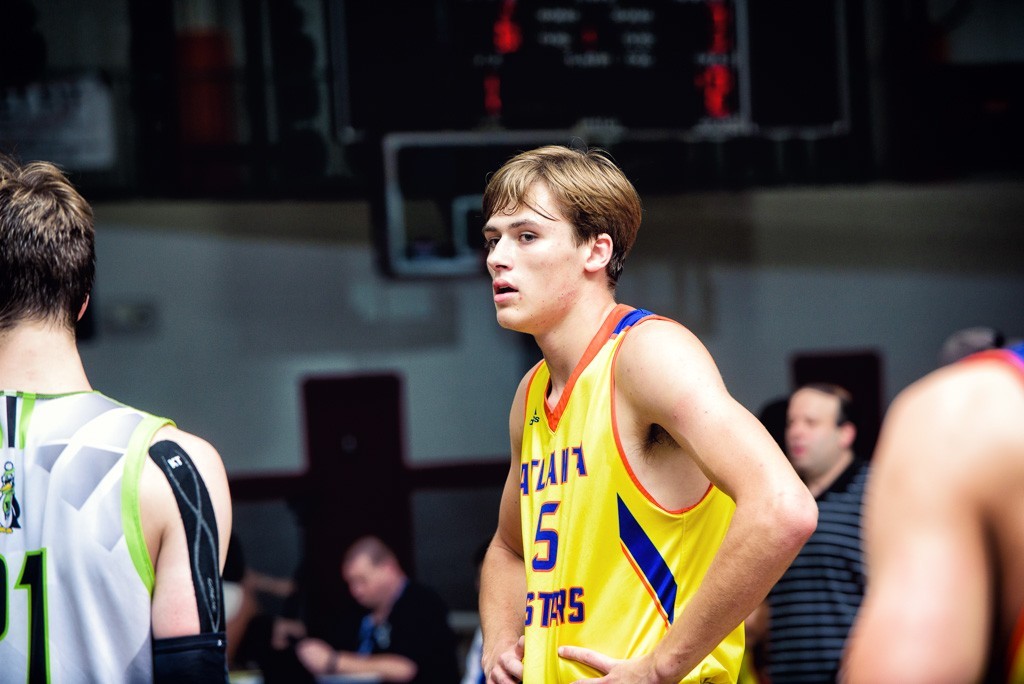 One of the most active players in the southeast was a sure-fire pick to be named on this list. Joshua Nwafor is a larger than life prospect, often times towering over players listed at his position. If you get past his overwhelming size and focus on his game then you’ll see a prospect that competes on every possession like it's his last. Nwafor treats out of area rebounds like they are his for the taking by never shying away from an opportunity to chase one down. It's scary to watch a player that size cover so much ground. On a number of occasions, I've seen Nwafor contest a 15ft shot only to attempt a rebound on the opposite side of the rim. He’s far from polished. Offensively he's a work in progress that’s still trying to put it together. The division 1 coach that invest in him now will surely reap the benefits later.

Team GA Magic won a lot of games this season with scrappy play that pushed them over the top of some intense matchups. The primary inside force for this talented team out of middle Georgia is 6'7 forward Justin Webb. His play earned some interest from Morehead State and Georgia Southern as he began to take form during the spring periods. Webb hasn’t scratched the surface of what he can be. As for now, Webb will need to continue utilizing his length and positioning on the defensive end to remain effective. Flashes of short corner jumpers and the ability to put the ball on the floor for a few bounces give some insight into what's to come.

Evaluating bigs can be a tricky process because sometimes you just don’t know when they will turn that corner into a legitimate Division 1 prospect. This moment occurred this spring as Atlanta All-Stars big man Brady Spence began really insert himself into different games. Brady has a good blend of both high post and low block skill thus adding value as big that can fit into different systems. Spence has the ability to rip drive defenders from 15ft while having enough counters in the post to be a consistent threat. His strength must improve as he goes up against bigs at the next level but that’s the case with most first year post. Spence played well enough to gain offers from Presbyterian, Embry Riddle, and West Point so far. James Madison, VMI, Dartmouth, GA Southern, and North Georgia have also said to be involved.

Alabama State and Alabama A&M have offered this in state product that has been on an upward trend all spring and summer. Tremere Brown checks several boxes as a paint defender with an evolving offensive package. Brown anchored the Georgia Kings this travel season by using his length to alter shots and provide some production on the glass. As the game continues to become more ball screen oriented, Brown will need to continue working on his mobility and lateral quickness. Defensively, Brown is in his most natural state posing as the last line of defense going from block to block. Offensively there are flashes of substance as a solid jump hook and 12ft range have helped keep defenses honest. All things considered, Brown has the tools needed to make an eventual difference at the low major level.

Newton forward Armani Harris will be asked to carry a bigger load this season as Kentucky commit Ashton Hagans is no longer around to make life easy. Harris seems up to the challenge as he had himself a solid travel season with a talented Atlanta Celtics squad. His athleticism and non-stop motor keep him in the mix with rebounds even against matchups were he's giving up an inch or two. Although his calling card is the energy he brings to the game, his offensive skill set should translate nicely to the next level. It’s not far off to see Harris affect score from all 3 levels as he has a range to the 3 that he doesn’t often get a chance to display. During his junior season, it was not out of the ordinary to see Harris attempt to dunk every dump off he received. Even if he has to change his approach to finishing at the next level, that mentality should bode well going forward. Harris may take some lumps early as he will be leaned on to shoulder more responsibility this year but it will pay off dividends going into his collegiate career. Presbyterian and Clayton state have offered the big man while several other Division 1 and 2 programs have stayed involved.