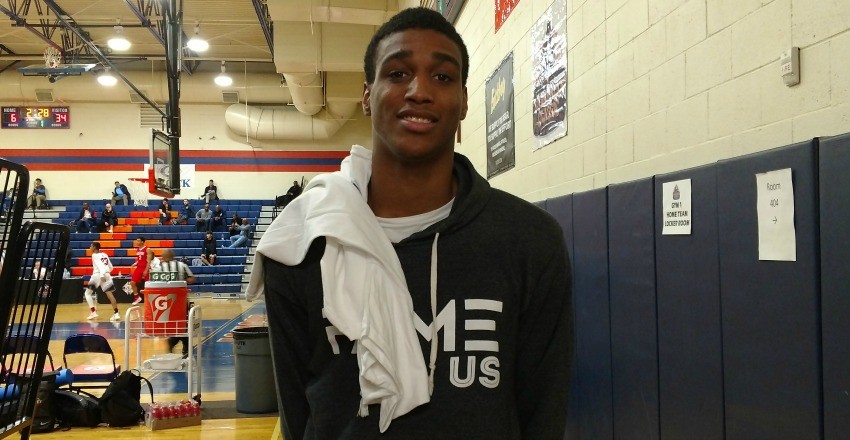 The Tarkanian Classic has become a must-stop along the way during the high school season and Thursday’s action showed that the trip to Las Vegas was already well worth it. Setting up to see Trinity International Prep, many in attendance expected to get a glimpse of high-flying forward Kenny Wooten. Unfortunately, the 6-foot-8 senior was in street clothes doing his very best coaching impersonation but following his team’s defeat, the California native caught us up on his current recruitment.

Originally a member of the 2016 class and headed to Nevada, Wooten had backed off of his commitment as his lead recruiter for the Wolfpack took a job at another college program. Now back on the market and having been able to display his explosive leaping skills and elite defensive versatility, Wooten has not been short on attention and college offers in recent months.

Despite being less of a highly followed recruit during his high school days, things have ramped up a few notches this time around, something Wooten seems to be enjoying. “It has been going really well. I have been getting a lot of love from the colleges, letters, and phone calls,” Wooten stated.

A defensive savant that can affect the basketball game without touching the ball or having a single play called for him, it has been six schools that Wooten feels like has done the most work with him in recent months. “Kansas, Arizona State, Arizona, Cal, Oregon, and USC are probably the ones I speak the most with,” Wooten stated. All six have already joined the fray with offers as the Trinity Prep product went on to speak about potential visits. “I plan on going to Kansas, Arizona State, and definitely Oregon soon.’

Having been seen by the likes of Arkansas, TCU, USC, San Diego State, Texas A&M, Oregon and Maryland in recent weeks, Wooten hopes to cut things down to a final list in the nearby future and also set dates for his official visit tour. In the meantime, the entertaining senior forward spoke on what he is looking for in a college. “I just want to go in and play the four or the three; mainly the four. I don’t want to be stuck in the post,” Wooten said. “I want a coaching staff that is going to push me to be the best.”

Due to the lacking amount of quality talent late in the recruiting year and the rediscovery of Kenny Wooten, all attention and offers have been earned by the 6-foot-8 jumping jack as it seems that the fight for the versatile defender could turn into a heated battle between some of the best out on the west.