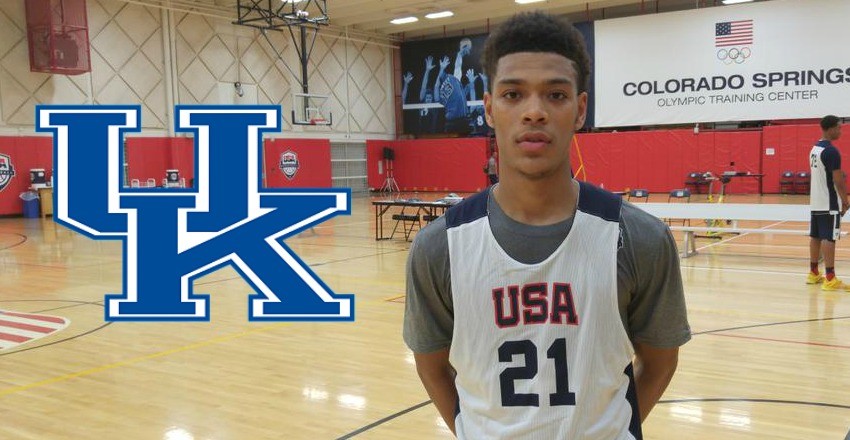 Showing progression and improvement is a sign of maturity and promise with any given basketball prospect. The steps that Quade Green has taken these past several months within his game have been nothing short of impressive. Today, those improvements paid off as the five-star lead guard made his college commitment to Kentucky.

Entering his senior summer this past year, Green was seen primarily as a score-first lead guard. However, comprehending that he was playing alongside such top tier talent as Mo Bamba, Brandon Randolph, and Hasahn French, the Neumann-Goretti product decided it might be in the best interests of his team for his role to be that of a playmaker and floor setter. From there, all that Green did was evolve into the best passer in all of high school basketball as he shattered Nike EYBL assist records on the travel circuit.

While not an explosive or a physically impressive looking floor general by any means, what Green does bring to the court is a tremendous IQ for the game along with the ability to run a team like a savvy veteran in the backcourt. Experience and maturity sure are not lacking and neither is Green’s willingness to make others better with the basketball in his hands.

A member of the USA Basketball family, the 5-foot-11 point guard is a guy that will be leaned upon from day one for his ability to make others better with the basketball in his hands. While Kentucky has thrown out lineups that are led by elite lead guards that rely more on their physical tangibles, Green is someone that will defeat his opponents via his intellect and feel for the game.

While the top-25 guard will be used as a facilitator first, this isn’t to say that he cannot score the ball still. Displaying a go-to mid-range scoring prowess along with toughness at the basket, the PSA Cardinals product chipped in with over 14 points while making nearly 90-percent of his tries at the foul line on the Nike circuit. However, his assist to turnover ratio was absurdly good as he averaged close to 11 dimes and nearly three steal, displaying excellent, two-way production capabilities.

The fourth commitment in the 2017 class for the Wildcats, Kentucky now boasts a top-three class nationally this fall with two pieces each in the frontcourt and backcourt. Green is joined by fellow top-50 commit Shai Alexander out top, both being elite distributors, and down low, PJ Washington and Nick Richards join the fray, giving Calipari and his crew another elite class on the national scale.