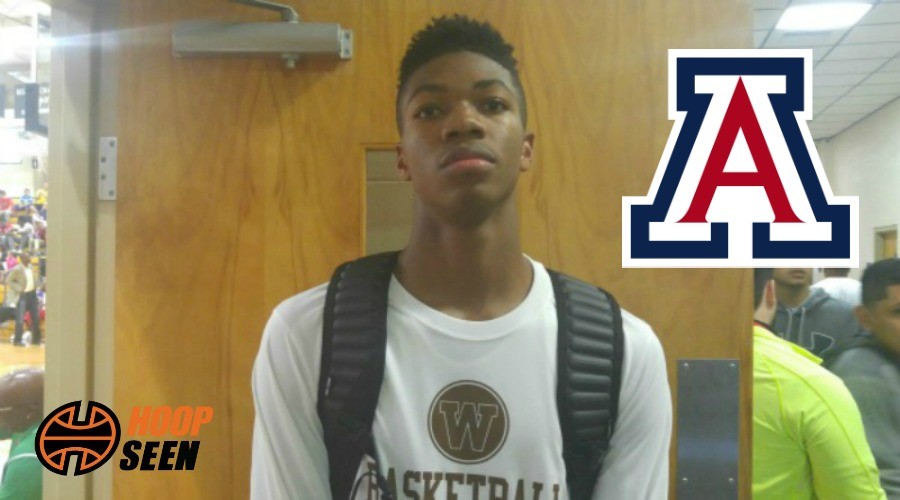 Arizona started out its 2017 class by scooping up the top two prospects from within the state’s borders earlier in the fall and on Wednesday, the Pac 12 program went across the nation in landing Brandon Randolph. The 6-foot-5 swingman that calls New York his home, called Arizona his future landing spot giving the Wildcats the top ranked 2017 recruiting class with less than a month to go before the early signing period.

One of the top breakouts of the 2015-2016 high school season, Brandon Randolph is all upside and is now just scratching the surface of how good he can really be. While a broken leg suffered during the 2015 spring which hindered his physical and ball skill development, the New Yorker is just now growing accustomed to his star potential.

Running alongside five-star big man Mo Bamba on the high school circuit at Westtown, and on the travel circuit with the PSA Cardinals bunch, Randolph has laid his hat on his shot making skills from beyond the arc. While his playmaking abilities need some work, the 6-foot-5 wing is the type that has excelled greatly out in Tucson. A solid athlete at the basket that has the quickness and length to defend various spots on the floor, the top-50 recruit is another tremendous addition for the blueblood program on the west coast.

A primary catalyst for the PSA Cardinals’ success this past summer on the Nike circuit, Wildcat fans must be excited about the perimeter capabilities out of the Westtown star. Converting nearly half of his field goal attempts and over 40-percent of his perimeter tries, Randolph should be a solid and efficient scorer off of the ball right out of the gates. Scoring over 16 points in less than 22 minutes of action, expect for the east coast recruit to be a more than capable replacement for graduating off guard Kadeem Allen and potential two and done star guard Allonzo Trier during the 2017-2018 college basketball season.

The third commitment in the 2017 class at Arizona, Randolph joins lead guard recruit Alex Barcello and five-star big man DeAndre Ayton in creating a dynamic and super talented trio that will suit up at the McKale Center next year. Heading into this weekend’s Red-Blue Scrimmage, a few others commitments could be on the horizon as the Pac 12 juggernaut remain involved for the likes of top-60 recruits Lonnie Walker, Daejon Davis, Hamidou Diallo, Trevon Duval, and Brandon McCoy.