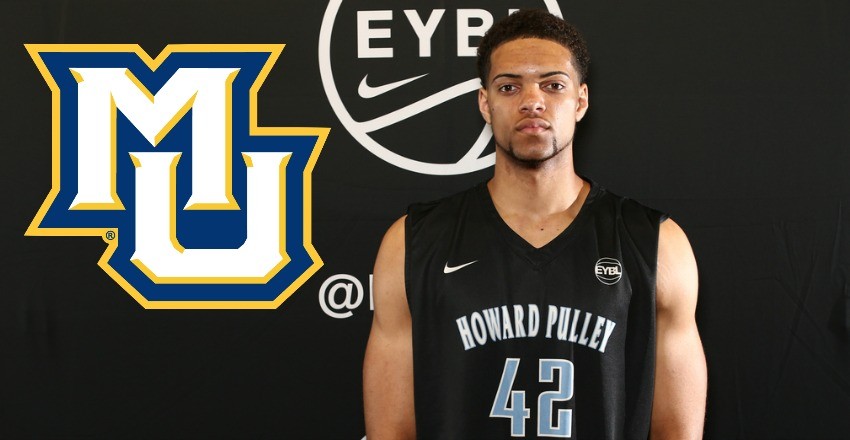 One of the top shot blockers and rim protectors in all of America came off the board on Tuesday in favor of a Big East program. Theo John, a 6-foot-9 center out of Minnesota, made it official as he will head to Marquette next fall in cementing the interior for Steve Wojciechowski’s crew for the next few years

While most of the talk surrounding the Howard Pulley gang this past summer surrounded the likes of Gary Trent, Brad Davison, and Tre Jones, it was John that kept the entire group together during their run throughout the Nike EYBL circuit.

Not someone that is known for his low block game, though John has improved with his back to the rim where he has a go-to hook jumper over his left shoulder, rather it is his energy exertions and glue guy qualities that makes him so valuable. Scoring less than seven points per game, the Pulley center did convert on nearly 60-percent of his shots and came close to 10 boards per-32 minutes of action.

However, where John does his best work is in the lane on the defensive end of the floor. Coming up with 1.7 blocks in less than 18 minutes of game action is beyond promising and the fact that John already exhibits a college ready frame makes it seem that he could be an imposing figure from day one at Marquette.

The second commitment in the 2017 class for Marquette, John joins Ike Eke, a bouncy bodied, 6-foot-8 power forward in creating a dynamic frontcourt for years to come. John should be a fine replacement in the middle for current senior center Luke Fischer but in the meantime, expect for the Big East bunch to remain hot on the trail as they seem to be in a great spot for combo forwards Hasahn French and Jamal Cain.