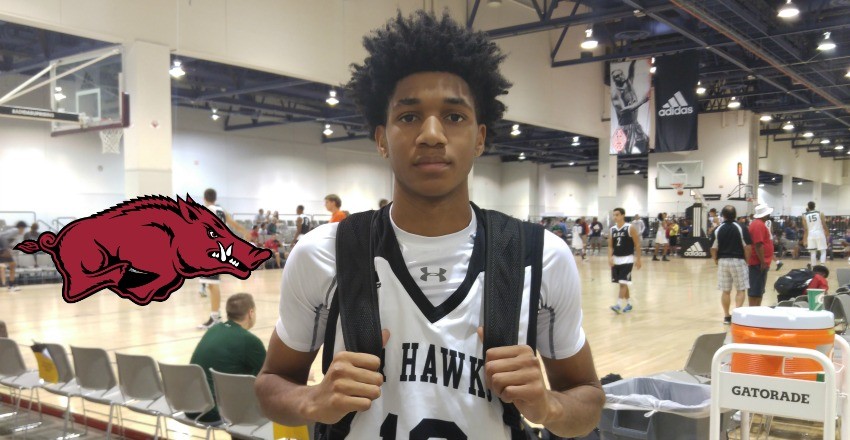 This time last year, Arkansas wrapped up the commitment of the top in-state 2017 prospect in big man Daniel Gafford. Fast-forward a year and the SEC squad picked up another top prospect from the within the state’s borders in 2018 wing Isaiah Joe.

A long and wiry off-guard with a major stroke, Joe impressed many during his final week of play in Las Vegas at the adidas Summer Championships. Running with the Arkansas Hawks 16-under squad, the same program that boasts three other Arkansas priority recruits in Desi Sills, Reggie Perry, and Ethan Henderson, it definitely doesn’t hurt getting the verbal commitment out of Joe for future’s sake.

While he has some filling out to do, the 6-foot-4 guard already brings a penchant for making shots from off of the catch. He has a good feel for the game and finds open cracks within the opposing defense as he can get on a roll via the deep ball. However, Joe can do more than just shoot it as he is tough enough in scoring it off of the hard attack to the basket off of his right hand and has the length and quickness to defend various spots on the perimeter.

The first commitment in the 2018 class for Arkansas, Joe spoke on what stood out about the Hogs program. “I have just always wanted to play for them since I was little and I am always comfortable when I am there,” the in-state recruit stated.

Someone that should fit in nicely within the confines of the up and down system that Mike Anderson has become known for, Joe gave further insight on the staff’s vantage point of its recent commit. “They told me that they liked my shot but, more than that, they like the others things that I do like hustling for loose balls, rebounding, and taking charges.”

A nice long-term pick-up in getting ahead within the class of 2018, expect for the staff in Fayetteville to hastily pursue some of the other top tier talent from the Arkansas Hawks program as Sills, Perry, and Henderson all would be terrific additions to the Arkansas men’s basketball program.