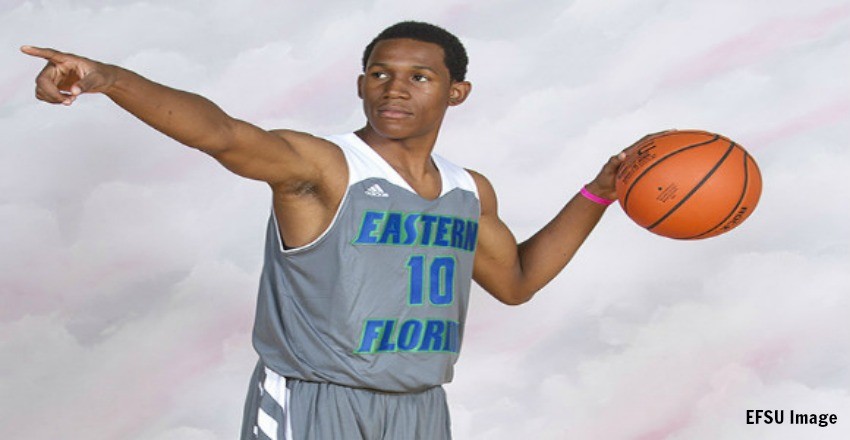 While some of the more talented prospects graduating this spring have already committed to a college, many programs begin to look towards the junior college ranks for ballplayers that could help out immediately next season. CJ Jackson, a 6-foot-2 guard from Charlotte, North Carolina, falls into the latter as the junior college standout has immersed himself into a high-level recruitment.

Playing alongside South Carolina freshman guard PJ Dozier and Miami center Ebuka Izundu on the travel circuit with the Upward Stars two summers ago, Jackson never quite received the dues that he rightfully deserved. He then took his talents to Montverde Prep for a year before committing to George Mason. After a coaching change in Fairfax, Jackson decided to go the junior college route as he ended up at Eastern Florida State College.

This past winter, Jackson exploded onto the scene as a prospect that could, just like Dozier and Izundu, compete at the highest level in the division-1 realm. Averaging nearly 17 points per game along with over three 3-pointers per game, Jackson is someone that can be leaned upon in scoring the basketball. However, he is a solid perimeter rebounder of the ball and can create for others, evidence being his five rebound and four assist averages this past season.

A lethal 45-percent shooter from deep, Jackson recently took his first official visit on March 27, a trip that took him to UConn. “It went well. It was nice,” the Carolina native said about the AAC program. “I like the coaching staff.  They really care for their players.”

Next up will be an official visit to Missouri, a trip that will take place this weekend. Jackson also spoke on offers from Ohio State, California, UNLV, Virginia Tech, and Seton Hall, to go along with the two already mentioned programs.

With three years of college eligibility left, Jackson has the chance to immediately contribute to a program of his choosing. While he is still in the stages of getting to know the schools recruiting him, he does have an understanding of what he is looking for in his future destination. “I want a good coaching staff with where I will get better and a winning program,” the Eastern Florida standout said.

Now with a visit under his belt to UConn and one upcoming to Missouri this weekend, expect to hear much more about Jackson as he looks to be one of the best shot makers still on the board for next season.