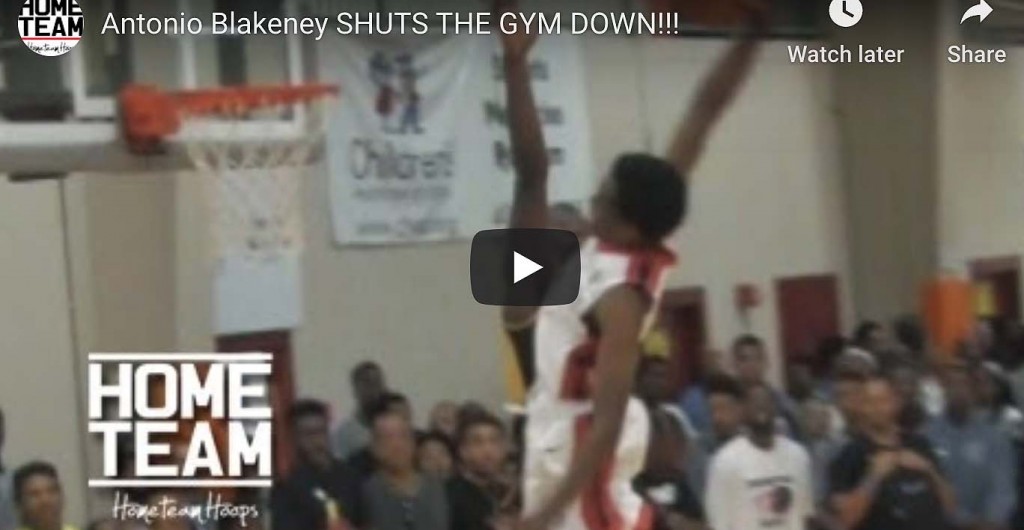 If you talk to an original of the HoopSeen gang, they know exactly what you’re talking about. It was a Saturday. It was packed, standing room only. It was court 4.

It was E1T1 and Team Thad, two of the most dominant travel teams in the nation at the time. The game was a monster match-up at the historic Bob Gibbons Tournament of Champions. It was the kind of game that honored the tradition of such a prestigious event.

Antonio Blakeney is the author of The Dunk and anyone who saw knows it. The play lives on forever on the internet. Here it is.

You’ve probably seen The Dunk on social media. Heck, you may have seen it today on BallIsLife’s Twitter.

Following that BallIsLife tweet, North Carolina senior Brandon Robinson gave it some context, too. Barry Brown, long before he was a stud for Kansas State, brought the energy levels up with a monster dunk just a couple of plays before.

But what people don’t realize, the court over had some rim-bending, too. It was a wild sequence at the historic Bob Gibbons Tournament of Champions. RayJon Tucker was on court 5 putting on, I would argue, one of the five best air shows we’ve ever seen at our events over the last decade. He started the energy.

The dunks were like a ping pong game between courts four and five. Those sitting in between the two games were getting a double dose of something special.

All of that energy was pent up and then Blakeney went court to court and put his defender, who will keep nameless for his own safety, into oblivion. The crowd rushed the floor and the refs tried to take control of the game.

I was standing at the scorer’s table. They looked to me for some help. Nope. Not this time. This was a special moment. Let them run on the floor. I didn’t mind. It was a legendary play and Blakeney retold the story so perfectly well a year later.

Listen, I tell this story a lot. I won’t apologize for it either. It was one of the most entertaining days I’ve had at the historic Suwanee Sports Academy. The building has hosted anyone that matters in the game of basketball over the last couple of decades. It’s a special place.

It is special because of moments like that. When I saw Robinson’s tweet, I was reminded of how many great basketball stories have started there. Thanks for sharing, BRob.