Bruce Thornton comes up clutch in Milton win over Newton 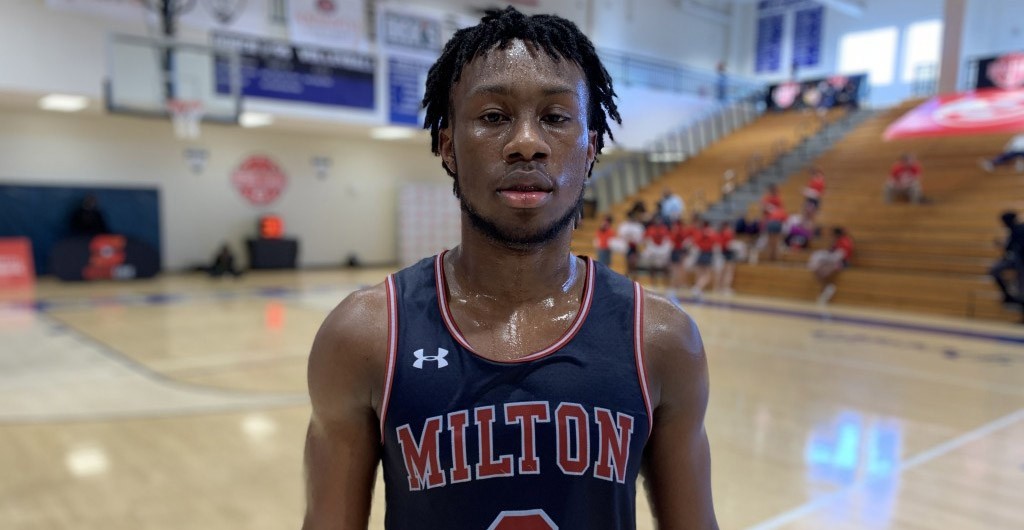 The ebb and flow of the highly-contested game built up an energy that playoff basketball deserved. The game brought in the star power from the Georgia basketball community.

Collectively, we were treated to a heck of a night. Milton won 68-63 and in a game like this one, a star was needed to shine brighter than the rest.

In the fourth quarter, we saw something special from sophomore Bruce Thornton. The five-star guard waited for the moment like a boxer who understands the value of a long, methodical fight. Known for his downhill style that always found the rim, Thornton was paced in his approach.

“Newton is a very good basketball team and we knew that we were going to have to slow the game down. We had to bring the game to our pace. When we did that, then it was time for us to take over,” Thornton said.

Up five going into the fourth quarter, it was time to turn up. It was time to close the door. That’s when Thornton went to work. he scored 16 of his game-high 28-points. He was a perfect 10 for 10 from the foul line.

The lead exploded and the gap became pretty set. Newton wasn’t going to get a chance to crack the code. Thornton made sure of it. The sophomore was the Region 5-7A Player of the Year for a reason.

Freshman Kanaan Carlyle was hobbled by a bum ankle. He turned it a couple of weeks ago and missed the Sweet 16 game because of it. There were moments when he jumped for a rebound but only landed on one foot, holding back the twinge of the injury.

Carlyle has a chance to be a special player moving forward. He was ready for the big stage on Tuesday night. His footwork to a shot is great. His confidence from three is ice cold, pulling from the energy that Trae Young brought from the baseline. The Atlanta Hawks All-Star was on hand for the playoff action.

One of the keys for this Milton team is the value of freshman big man LT Overton. The 6-foot-4 defensive lineman is tough as nails. He’s just a different kind of dude down low. His 19 rebounds were just as important as Thornton’s fourth-quarter free throws. This was a contest of great guard play. So, winning the rebounding battle was going to be clutch. Overton set the tone, invoking memories of NFL All-Pro Cameron Heyward from his Whitfield Academy days as the Dwight Howard-stopper in Class A Private.

Milton senior Evan Hurst has been with the program from day one and every year has added value to the Eagles rotation. He was a do a little of everything guy on Tuesday night. His defensive abilities (three blocks, two steals, five rebounds) from the guard spot were important.

Newton’s Caleb Byrd finished up his terrific high school career on Tuesday night and had Andrew Wilson, one of his future coaches from Georgia Southern on hand for the game. Byrd is a wired-to-score kind of guy and the Eagles have had success with guys like him in the past. He finished with a team-high 25-points in the game.

His backcourt mate Shawn Smith also wrapped up his high school career. Smith was a second-half stud for the Rams, racking up 10 points in the second stanza and pulled down six rebounds with four assists along the way.

As this year’s talented senior class graduates from Newton, the mantle will shift to the foundation of class of 2022 guard TJ Clark and class of 2023 wing Qua Brown.

Clark is a threat from three and he has great size and a great build to develop into a terrific rim attacker for the Rams. He was important on the glass in this game and continues to be a valuable multi-positional guy.

Brown is an athletic 6-foot-4 wing who plays bigger than his size. He's a great rebounder, pulling down 10 boards in this game. Brown is great slasher and was big tonight in the loss. He is one of the better freshmen I've seen in the Peach this season.