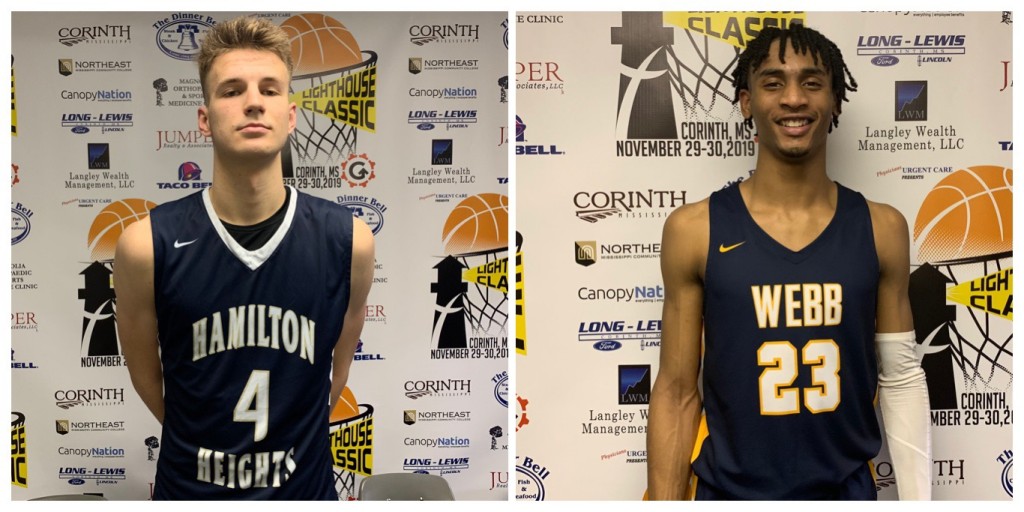 CORINTH, MS – The seventh annual Lighthouse Classic tipped off on Friday morning with some of the top teams in the Southeast converging at Corinth High School. Several big names performed well on the opening day of the event while a couple of new names emerged.

Here are the storylines from Friday at the 2019 Lighthouse Classic…

Heading towards the College Football Playoff, the SEC has a couple of teams in the running to compete on the sport’s biggest stage. However, on Friday, the Florida and Tennessee basketball programs were able to brag about a couple of senior prospects they signed last week.

2020 Chattanooga (TN) Hamilton Heights wing Samson Ruzhentsev helped put his team over the top against a talented Orangeville Prep squad from Canada by a score of 77-59. Ruzhentsev, a Florida signee, posted 31 points on 12-19 shooting from the floor and nine rebounds.

The 6-foot-7 wing man set the tone early for the Hawks, as he showed his ability to score from all three levels. He sunk four of five three-point attempts and soared above the rim for several eye-popping dunks. With his ability to play inside and outside, Ruzhentsev will being value to the Gators as a versatile forward that can play as the 3 and 4 in different situations.

Ruzhentsev used the Lighthouse Classic as a springboard in his recruitment last year. The Russian prospect came in with some interest and offers, but he had a fantastic showing in Mississippi. This year, it looks like he is here for an encore to show off his improvement and progress. Hamilton Heights will take on West Oaks (FL) on Saturday for a chance to win another Lighthouse Classic Prep School Challenge championship.

Shortly after Ruzhentsev’s impressive performance, Tennessee-bound guard Keon Johnson and the Bell Buckle (TN) Webb School matched up against Olive Branch (MS) Center Hill in what turned out to be one of the best games of the day.

Johnson’s success has been no surprise to us here at HoopSeen.com. He has been a standout for years with EAB and nothing was different on Friday. The 6-foot-5 guard rattled in 37 points, nine rebounds, and seven assists in a narrow 67-66 win over the Mustangs.

Johnson has improved his three-point shooting over the last year or so. He made that clear with a couple of 3’s right off the bat to get his team going early in the game. While his scoring was important for the Webb School, his biggest contributions came on the defensive side of the ball. The ultra-athletic guard had several blocked shots and some big defensive rebounds in crunch time to give his team the ball back down the stretch.

The Webb School will return to action on Saturday and face Holly Springs (MS) at 4:30.

Coming into this event, the one game I had circled to see was Eads (TN) Briarcrest and Jackson (MS) Callaway, as they boast two of the top point guards in the 2021 class in Kennedy Chandler and Daeshun Ruffin. After a back and forth game that ended with Briarcrest winning 74-64, it’s safe to say the game and matchup lived up to the billing.

Ruffin had an electric first half with his knack for scoring the basketball. The 5-foot-9 highlight reel connected on five 3’s and scored 21 points in the first half of action. The junior kept the defense off balance with is slippery driving ability and his tough shot-making skills. He got in a rhythm in the first frame and really pushed Callaway out in front and the Chargers led by a score of 46-40 at the half.

Despite a strong first half performance, Briarcrest was able to make some adjustments going into the second half. Senior guard Michael Malone held Ruffin to three points in the second half. Malone did a nice job of running Ruffin off the three-point line and denying him the basketball.

Chandler, who has been regarded as the top point guard in the 2021 class, held his stance on Friday night. He was electric and explosive end-to-end with his speed and ball-handling ability. He also did a nice job of getting his teammates involved and picking his spots as a scorer.

North Carolina head coach Roy Williams extended a scholarship offer to the junior last week. Memphis had two assistant coaches in attendance to see him on Friday night, too. Michigan, Florida State, Tennessee, Syracuse, and Ole Miss are some of the other schools involved in his recruitment at this point in time.

Mason Miller, 2021 SF, Houston (TN):The son of Memphis assistant coach Mike Miller, Mason wasted no time getting going on Friday evening. The 6-foot-8 forward hit a 3 right off the bat to start the game and kept it going throughout the night. He made four three-point attempts, but the most impressive part of his game was his attacking ability. The junior was persistence in his approach, as he attacked the defense and made high IQ plays with dump offs to teammates for easy finishes.

AJ Staton, 2020 SG, West Oaks (FL):My colleague Justin Young had a lot of good things to say about Staton in September following an event in Florida. Friday was no different for me in my viewing. The 6-foot-5 wing set the tone for his West Oaks squad with his motor and intensity on both ends of the floor. The senior consistently stayed in attack mode and got to his spots on the floor with ease. Staton also knocked down some shots from the perimeter. If he can do that consistently to go along with his defensive prowess, Staton could be a sleeper prospect for mid-major programs going into the winter.

Camiron Cherry, 2021 PG, Carolina Basketball Academy (NC): Carolina Basketball Academy got off to a slow start in their first appearance at the Lighthouse Classic, but that didn’t stop Cherry from making his presence known. A slender, 6-foot-3 guard with excellent ball skills, Cherry made plays off the bounce as a scorer. The junior was shifty and quick with the ball in his hands, and his ability to get his shot off in a split-second was a major factor in his game. He’s an intriguing score-first guard in the 2021 class.

Matthew Alexander-Moncrieffe, 2020 SF, Orangeville Prep (CAN): A smooth and polished wing, Alexander-Moncrieffe looks the part as a high-level wing. The 6-foot-7 forward excelled at attacking the basket, and, despite struggling around the rim early, he made some big plays down the stretch. The Canadian senior is one of the best available wing prospects in the country.

Kaeden Laws, 2021 SF, Center Hill (MS):Laws, another polished wing man, had a solid showing in a loss to the Webb School. The 6-foot-5 forward shot the ball well from behind the arc, as he knocked down several 3’s in a neck-and-neck game. The junior excels at shooting the ball of the catch. His skill-set is also advanced for his age. With his versatility and skill-set, don’t be surprised to see some Division I programs showing interest going forward.