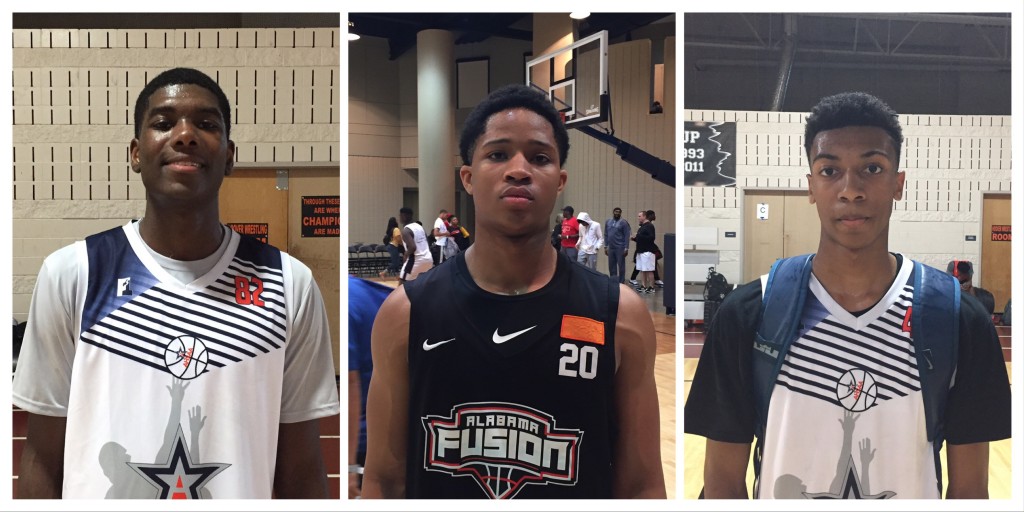 HOOVER, AL -- Some of best high school basketball players in the state of Alabama converged at Hoover High School on Saturday to showcase their talent at the inaugural AHSAA Elite 100 camp. The first-ever high school-based camp setting proved valuable for those players in attendance, as over 60 college coaches made their way to the event to see prospective student athletes.

Here's a glimpse of what happened on Saturday at Hoover...

THE THREE MOST IMPRESSIVE GUYS I SAW WERE...

Tony Toney, 2020 CG, Mae Jemison: From start to finish, there wasn't a more impressive guy than Tony Toney. The 6-foot-2 guard was all over the floor no matter what was going on, and, when the majority of the cap started getting tired, he pushed through and was still very impressive. With his strength and athleticism, Toney was a terror for opposing players to guard. He showed toughness and grit when scoring at the rim, while also keeping everyone honest with his ability to knockdown shots. A college coach compared him to Boston Celtics guard Terry Rozier and I don't think that's too far off. After coming in as a virtual unknown to most college coaches, I would expect his recruitment to heat up. He was the talk of the college coaches and should warrant mid-major to high-major attention.

Jalen Myers, 2020 SF/PF, Bob Jones: As he continues to develop, there is more and more intrigue that comes with Myers (pictured left). The long, wiry 6-foot-7 forward showed his arsenal on Saturday, as he shot the ball well from behind the arc. Myers has long range on his shot and has no problem hitting shots from a few feet behind the three-point line. He also passed the ball extremely well in transition and created opportunities for his team. However, the most impressive part of his day was his rebounding. Using his long wingspan, Myers was able to snatch several rebounds out of his area. I'm interested to see where his recruitment goes from here.

GaQuincy McKinstry, 2021 CG, Pinson Valley: Much like Toney, GaQuincy "Kool-Aid" McKinstry played with an endless motor at the Elite 100 camp. The five-star football prospect was able to overpower smaller guards with his strength and athleticism, as he manufactured points throughout the day. McKinstry also made it a priority to make an impression on defense with his smothering on-ball defense. In fact, one of the best parts of the day was McKinstry's matchup with Tommy Murr. Kool-Aid will have the opportunity to play football at whichever college program he wants, but he made it known that he can play basketball at the next level, too.

THE FOUR BREAKOUT PERFORMERS I SAW WERE...

Cameron Crawford, 2021 SG, Spain Park: I saw Crawford (pictured right) early in the spring at our Bama Jam event and he showed flashes of being a promising prospect. After being sidelined for the majority of the spring with a broken ankle, the rising junior made quite the impression on Saturday. At 6-foot-3 with a long frame, Crawford has a nice skill-set and ball skills. He made several smooth plays at the rim and even made some shots from the perimeter throughout the day. He is still far from a finished product, but Crawford has tons of upside and is one to track going forward.

Andres Burney, 2020 PF, Pike County: We have seen Burney several times since last July and he continued his quality play at the Elite 100 camp. A long, slender forward, Burney matched up well against opposing big men on Saturday. He competed on both ends of the floor and made plays in transition with his ability to run the floor. The 6-foot-7 forward moves well and can play multiple positions on the floor, too. I thought he raised some eyebrows and had a quality day all-around.

Geraldo Lane, 2020 SG, Columbia: Lane put together a nice day of basketball and several college coaches raving about his upside and potential going forward. The long, slithery 6-foot-4 wing soared through the air and made several smooth finishes during game-play and even made some shots to keep defenders honest. He still needs to get more consistent with his perimeter shooting but his upside and explosiveness are evident. He helped his stock among college coaches on Saturday.

Bryson Hall, 2021 PF, Tuscaloosa County: I mentioned last month that Hall got off to a slow start during the travel season with some up-and-down games. However, after Saturday's action, it looks like the page has officially turned for the rising junior. Hall played the role of mismatch big man with the ball in his hands as opposing post players had a hard time containing him. He was able to face-up defenders and score off the dribble while also creating for others. Hall has an extremely unique game for a player at his size and position and is one of the most intriguing players in Alabama's 2021 class.

THE CLASS OF 2022 CONTINUES TO LOOK BRIGHT

Here at HoopSeen.com we have documented the impressive acumens of 2022 Oak Mountain (AL) big man Will Shaver and 2022 Mobile (AL) McGill Toolen forward Barry Dunning this spring. Nothing was different on Saturday with those two, as they impressed the high-major programs in attendance.

My biggest revelation from the AHSAA Elite 100 camp was how strong Alabama's 2022 will be, and much of that is because of Sparkman High School guard Tyrese Elliott. The 6-foot-2 combo guard (pictured middle) has been on a tear this summer on the team camp tour, where he has picked up scholarship offers from UAB and Ole Miss. After his play on Saturday, I wouldn't be surprised to see more high-major programs throw their hat in the ring.

Elliott plays the game at his own speed and pace. He doesn't get sped up or rushed at any point during games, and, in turn, looks like an upperclassmen. He was extremely impressive passing the basketball and showing off his high basketball IQ, too. The rising sophomore excels in ball screen situations, as he has shown the ability to make the right decision, whether it is scoring or passing.

Another young 2022 prospect that emerged on Saturday was Hazel Green (AL) forward T'lvaian Scruggs. The 6-foot-4 forward showed the ability to play inside and out. He is very good with angles and scored in the post while also facing up and making some shots from 15 feet and out.

WHO'S WHO OF COACHES IN ATTENDANCE