Fridays Notebook from day 1 of the Florida Jam 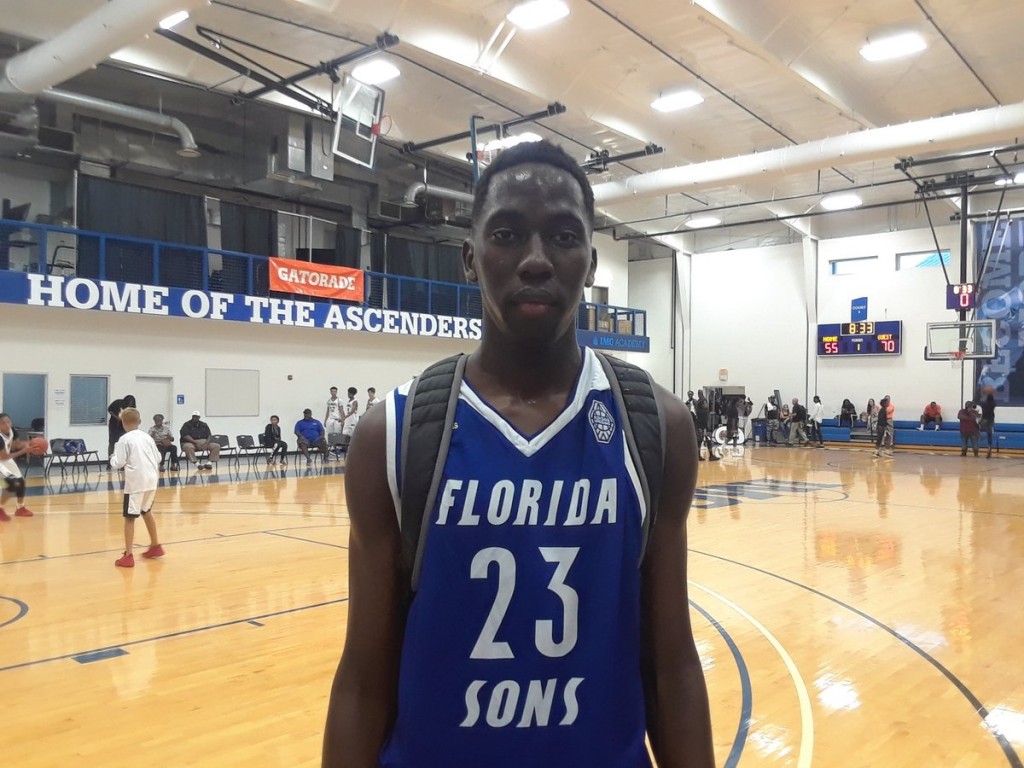 Prince Mosengo(pictured above) is in the next way of big men that bring a lot of value to both sides of the ball for the Florida Sons Select.  Some of the plays he made were more indications of what's to come as he always left you wanting more.  There's some work to be done in some areas of his game but that's understood for most players in the 2022 class.  The 6'7 forward has the size and has enough skill today that shows you what he's capable of in the future with some added strength and polish.  - Tai Young

Hoops on A Mission didn’t miss many shots to start their matchup with Dream Nation. Dominik Camooso had a hot first half in particular hitting four 3s on his way to 14 first half points. Markel Carter wasn’t too far behind with three 3s of his own. Camooso would finish with six 3s and 22 points, while Carter ended with 17 points and five threes. The sharp shooting wouldn’t be enough to win the game though, as Maxwell Hopkins put up 13 points to lead Dream Nation to the win. - Bre Singleton

Starting off the day at the Florida Jam for the junior division, IMG’s 14U squad got a nice win on their home turf over Wave Basketball. Players Bladen Hopkins, Brett Gomez, and Jaylen Tinvervin combined their efforts to put up 40 points as a trio. Hopkins was the leading scorer with 17 points. Gomez added 12 and Tinvervin added 11.- Austin Smith

If there was a path to the basket then Eric Dailey was sure to find it for IMG. The 6'5 wing relentlessly attacked the basket with an unmatched aggression on the court. He was a mixed bag in terms of his finishes but despite that, he had several attempts from the free throw line. The lefty made just enough shots to keep the defense honest and defensively he allowed his athleticism and instincts to make a few plays off the ball. His upside and mentality could turn him into a future division 1 player. - Tai Young

In a matchup over Wave Basketball, Sheldrick Simpson dropped 32 major points, 22 of which he scored in the first half. His scoring opportunities came from his ability to finish through contact at the rim. He was also impressive as a playmaker by creating easy shot attempts for his teammates. - Austin Smith

There was some nice young talent out on night one of Florida Jam. Charles Crews Jr. and Anthony Midgett were two of the best 2021 guards I saw at Florida Jam on Friday night. The Bay Area Hoops Elite backcourt caused a ton of issues for High Hoops on a really great game. Midgett is an undersized point guard but has the ability to get to the rim and finish like few players I’ve seen. Crews Jr.is a flat-out scorer. He can knock it down from deep, get to the rim and finish, and knock down free throws. He finished with 24 points and has made himself a “player to watch” moving forward. Crews Jr. and Midgett were able to lead Bay Area Hoops Elite to an eight-point win over Hoops High, who had some solid players of their own. Caleb Jones has nice size for a freshman guard and knows how to use it. His 14 points came in a variety of ways—offensive rebound, mid-range jumpers, you name it. Jamin Primus and Anthony Midgett’s matchup was fun to watch at the point guard position. Primus is a tough slasher as well, and uses floaters to get his shot off in the paint. He can knock down the three and did so to end up with 10 points. - Bre Singleton