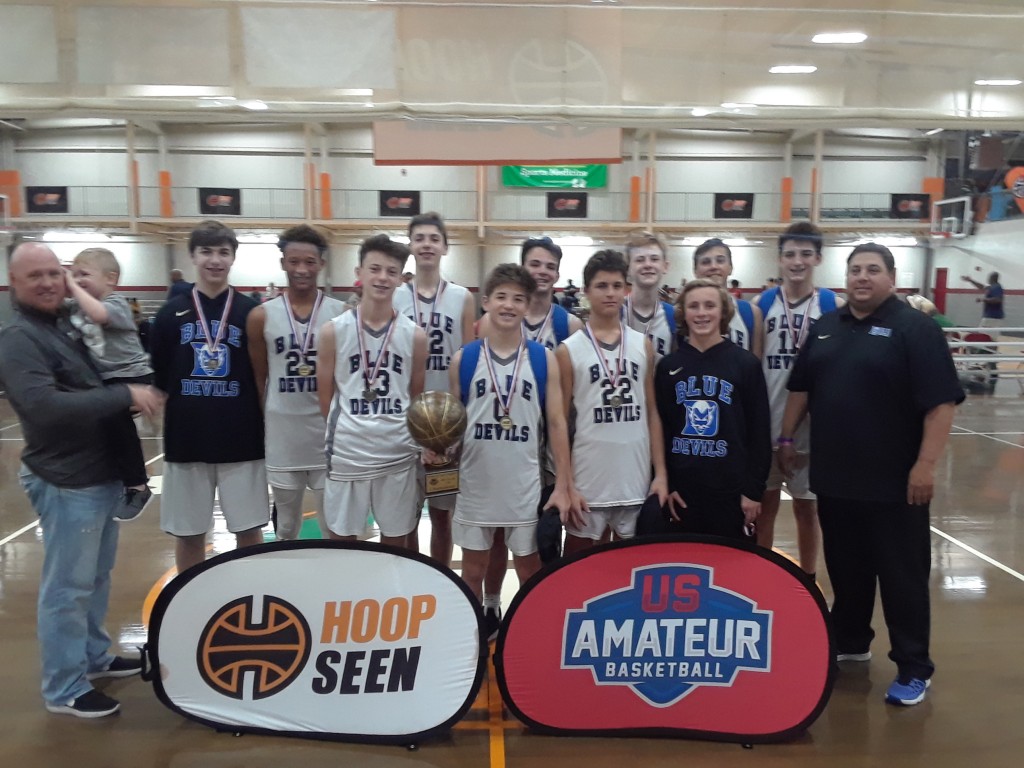 The Heat continued their dominant stretch with a 54-31 win over D-Elite. Zayden Walker did enough on Saturday to earn himself some recognition from our HoopSeen staff but I assume he wanted more as he followed it up with three more impressive outings. Point guard Jesstynie Scott did a great job of getting the team settled and speeding up the pace when they got into scoring droughts.

Teams that faced them had no answer for the Heats full-court pressure. Time after time they turned teams over and feasted on a number of easy layups.  Often times the team suffocated the opponents to the point of not allowing them past halfcourt.

Jeremiah Omoregie had did all he could for D-Elite, chipping in 14 points but it wasn't enough as Zayden Walker had 24 points while Omari Woodard and Javoris Scott had two threes apiece. - Tai Young

The 6th-grade division championship game was a battle through three quarters. Michael Todd and Josh Davis handled the bulk of the scoring for Sports Academy South in the first quarter and had hem up 3 to end the first. Triple Double came out strong and went on an incredible 12-0 run to start the second quarter.

Caleb Underwood led the charge with six points. SAS wouldn’t score again until there were two minutes left in the half. Chaz Beasley put in back to back buckets to get Sports Academy South back on track. They’d still be down six at the break, with a score of 24-18.

Triple Double found life from beyond the arc in the third. Underwood hit two threes and Shepherd Jones and Samuel Thacker hit treys as well. By the time the third quarter had ended, Triple Double had extended its lead to 15, with a score of 42-27. They would not let up from there and went on to win the chip by a strong 16 points.

Georgia Impact forward Devon Rainey came out on fire in the 13U Championship game. Rainey scored his team’s first eight points, all in the paint. Jackson Sousa had the same energy for D-Elite as he put up seven points in the first quarter. D-Elite would be down 10-16 win the first was over.

D-Elite big man Gabriel Omoregie would come alive in the second quarter. He had himself a first half, putting 12 points and six boards next to his name on the score sheet. Rainey had 15 by halftime for the opposing team to give Georgia Impact a 34-28 lead. D-Elite would struggle to score to start the third, while Aaron Smith got involved offensively for Georgia Impact.

Davion Thomas turned on his playmaking ability late in the third and dished out five assists that helped out huge Impact run. D-Elite found itself in a 17 point hole to start the fourth. The lead would stretch to 20 with just under five minutes to play and it would last until the finish. Rainey finished with 18 points in the win.

Thomas ended up with nine points and seven assists in a solid all-around game. Camani Cobbs and Amon McDowell finished with 10 points, 3 steals and 11 points, 3 steals respectively. Sousa ended with 13 points for D-Elite and Omoregie would finish with 16 points and eight boards. - Bre Singleton

The 14U Championship game didn't disappoint as there were many haymakers swapped through all 4 quarters. Both teams made multiple runs and had to withstand the others to stay in the game. There was some balanced scoring in the first half with both teams having 7 players to make a mark on the box score. Darius Johnson of the West Georgia Warriors excelled at getting to the rim which resulted in a few easy attempts from the free throw line.

The third quarter both teams increased their scoring going from a 19-18 score at halftime to 35-27 and the end of the third. Jarred Russo of the Deep South Blue Devils had 10 second-half points, the majority of which came from inside the paint. The Blue Devils had a good blend of size and skill as Brandon Drummer and Toby Thompson made plays at would eventually give their team some separation. - Tai Young