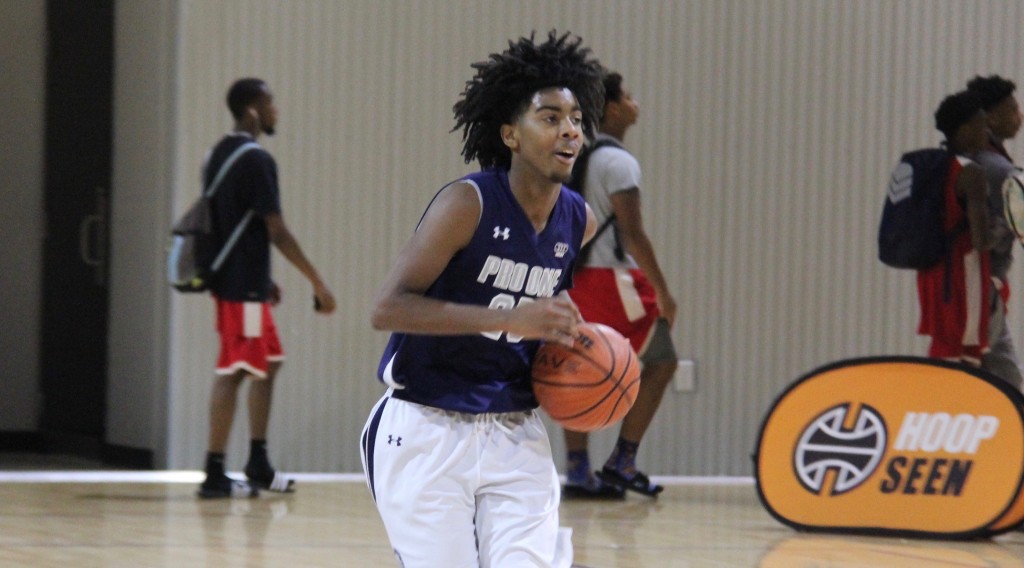 With the summer officially in the books and the high school basketball season now in sight, it’s time to finish up yet another chapter in Alabama basketball. Throughout the summer months, several players took advantage of their opportunities and earned scholarship offers and interest.

Here are five summer risers from the state of Alabama that made the most of June and July:

Brandon Nicholas, 2019 SG, Mae Jemison: It didn’t take long for Nicholas (pictured above) to enter the spotlight this summer – just go back to his first game at #BOTS. The 6-foot-3 sharpshooter hit a 3 at the buzzer to give his Pro One Select Navy 16U squad a big win on the opening night of the event; he also finished with 34 points on the game, with seven three-pointers. Nicholas had plenty of big performances throughout the summer, and, with John Petty graduated, the junior looks to be the focal point for the Jaguars under new head coach Mike Smith. Obviously, Nicholas is a dangerous shooter from behind the arc, but his game continues to progress. He showed the ability to make plays in the lane and his passing is improving, too. Nicholas is receiving interest from several Big 12, Conference USA, and A-10 schools.

Jamari Blackmon, 2018 PG, Hoover: I will be the first person to admit that I have severely underrated Hoover point guard Jamari Blackmon up until this point. Blackmon, a tough, defensive-minded point guard, is one of the best finishers in the state of Alabama. He proved that during the playoffs last season for the Bucs and re-emphasized it this summer with JSI Elite. The senior landed his first two scholarship offers from Alabama-Huntsville and Alabama A&M following a strong summer. Blackmon currently sits at No. 34 in the 2018 Alabama rankings, but it’s safe to say that will change when we update our rankings next week – the Hoover product is a worthy Division-I recruit and is primed for a big senior season.

Demond Robinson, 2019 C, Lee-Montgomery: Robinson made the switch to the Atlanta Xpress 16U group for the July evaluation periods and the big man flourished throughout the month, especially at the UA Finals. The 6-foot-8 big man was one of the best rebounders I saw in the 16U division. However, what was most impressive about his game was his ability to knock down jump shots. Robinson hit several 15-footers with ease, and with a nice set of hands and feet, he is a difficult player to guard in the post. With a couple of mid-major offers now in hand, don’t be surprised to see Robinson seize his opportunity during the high school season.

Phillip Desrosier, 2018 PG, Grissom: Heading into the summer, Desrosier had picked up some interest from Division-II and Division-III programs. Rhodes College even extended an early offer, but after a big-time performance at #BOTS, the senior may be worthy of even more D2 interest. Desrosier showcased his shooting ability in a huge matchup against the Atlanta All-Stars, as he hit several 3’s on his way to scoring 25 points in a narrow loss for Pro One Select Grey. With good grades and the ability to shoot the basketball, Desrosier could be an interesting option in the backcourt for low-level programs.

Tyler Millin, 2018 SF/PF, Calera: Millin popped onto the radar at UAB’s team camp last summer with Calera, but after a quiet high school season, we forgot about the versatile, 6-foot-6 forward. It’s safe to say we remembered him this summer, as he performed very well at team camps and at #BOTS with the Alabama Celtics. Millin is still very raw and has some development to go, but it’s hard to deny the lefty’s talent. He can play inside and out but he is most efficient finishing over his right shoulder in the lane. Millin proved he is a reliable option in the post with his baby hook, and, with his upside, more options could arise in his arsenal. Tusculum is his only scholarship offer right now, but don’t be surprised if he is hearing from plenty of programs at the end of the high school season.