Spring signers and risers from Tennessee 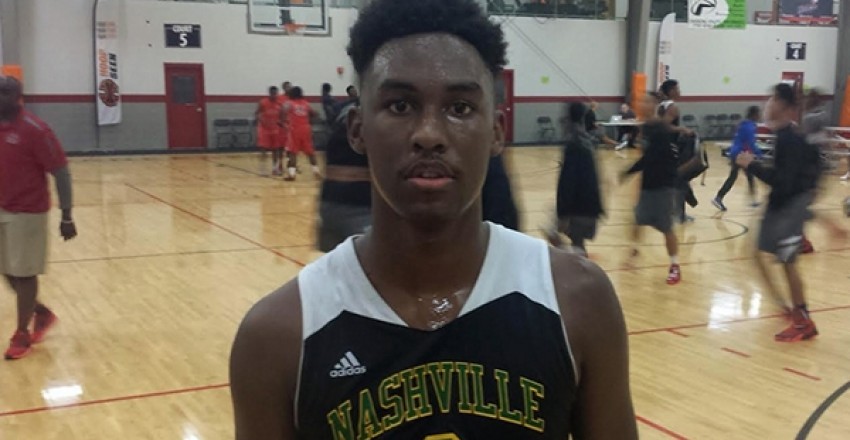 Spring signers and risers from Tennessee

April is always the initial highlight month for the summer scene in our hoops laden society. This year was no different. Let's take a look at some late signees and then delve into who made April their own personal highlight reel.

Its not usually a good sign when things get late but this year a handful of late signees in the D1 world rounded out what has become a very successful Class of 2017 in the Volunteer State.

Tajoin Jones (Oak Ridge) was a Mr. Basketball finalist and after playing some games in the April period as an unsigned senior he relinquished this tag and signed with UNC-Asheville.

Jalen Crutcher (Ridgeway) took a slightly different path. After the coaching change in Chattanooga, Crutcher decided to pursue his options and after a weekend or two of unsigned April action he landed at Dayton and the rest as they say is history.

Tristan Jarrett (Haywood) got his feet wet as well playing in some April events and as the highest rated unsigned guy in the state he finally pulled the trigger and landed at Kennesaw State.

GIMME 15 WHO MADE THEIR STOCK SOAR IN APRIL...OK HERE THEY ARE

If you know me then you know how I feel about Junior Clay. I think this young man is a class act, he plays to win and now everyone is coming to grips with the fact that he can play this game. A natural leader who showed out in April, the attention is there so July will be magical just you wait and see.

His confidence level is sky high, he parlayed a superb state tournament performance into some really good hoops in April playing up for the Tennessee Bobcats. He can stroke the ball, has excellent size for a guard/wing and really understands the game. As his athleticism and quickness improve so will his level.

Sports fans this one is special. Playing up with the newly formed EABC crew, Johnson has been the talk of every event he has participated. His skill level with the ball is amazing, he has natural quickness and spring plus he understands and enjoys the game. As he grows, his name will become household in Tennessee.

So who is this kid you ask, well let me tell you. Big inside emerging force, has a bright mind and respects the game. His footwork and hands are his best assets and he simply knows how to put the orange ball into the orange cylinder. As his confidence level rises so will his overall game, love his work ethic and future.

This team has been the talk of the April scene in this age group and Akeem has been one of the very bright spots. Big and physical but still learning and understanding the game, he has a mega bright future. He can score on the block, he rebounds with passion and he will block shots and defend in the post, dang I like him already. When you think of Akeem think basketball future.

We all know Alex Lomax, so how is he a rising prospect. I shall tell you. The more you watch him the more you see what the future holds. Great body, vision, unselfishness, winning mentality, the absolute traits that every point guard needs and must possess. His shot is improving, he can give you buckets and when the game is one the line who else would you give the ball too. I rest my case.

The strides this guy has made is actually quite a story within itself. He has transformed his body, and he's not done yet, from the "Big kid with good hands and feet" to a real prospect who holds offers from Florida and Auburn. His shot blocking ability is pure instinct, his offensive game is emerging and his board work and position defense is also coming around. This future is scorching hot, believe that.

This kid may not be a D1 player but someone is going to get a special player who loves to compete and win. He is a scrappy lad who plays tough defense, his shooting has become a serious weapon and his athleticism is much better than he is given credit. The remainder of this summer and a big senior season will result in somebody paying for school in the fall, bet on it.

This kid loves to win, you can see the pain in his face when he loses. He takes this personally. His game is really coming around as well, his shot is good when fundamentals are followed, he sees the floor well and is just as pleased with an assist as a bucket. He leads by example on defense. Maturity will be his next hurdle but his love and dedication will overcome. Bright, bright future.

This summer has started with a bang for THH. His scoring has become his primary weapon , he glides to the cup, his touch has become deft and he is finding ways to score against defenses designed to stop him. Would love to see his progress come to fruition without having to break for football. He has length, athleticism and good size, he could be the total package.

It happened one weekend late in the regular high school season. The light came on against the best of competition, the likes of Hamilton Heights and  LaLumiere, Starling started to get it. This maturation has continued as he was drawing rave reviews for his play in Spartanburg. His size and strength are hard to match, his effort level is matching his skill level and everyone is talking about his ability.

Skilled lefty guard has had a fantastic start to his rising junior summer. His shot has gained confidence and his overall leadership has made him a must watch thus far. His slight build will make some stop and evaluate but his handles and his ability to make the right play brings you back.

This kid is the unquestioned best on ball defender in this entire state. His play has drawn offers from several OVC schools and as he continues to blend with his teammates this July could be a very special one. His shooting touch can be hit or miss but he is taking it hard to the bucket and finding the open man to score. His laurels rest on his ability to shut down your best offensive weapon so his value is immeasurable to a coach.

That's not a misprint but that a discussion for another time. This kid has been a joy during the EYBL campaign. He has length, he can shoot the short jumper and he is a match-up nightmare for anyone and everyone. His strength isn't where it needs to be but his skill level has college coaches in a tizzy.

Injuries this past year kept him from playing at his best. The first portion of the summer circuit has went well for him, he has shown the ability to score from the perimeter; as well as, take folks off the bounce and finish at the rim. He is more physical and is just a guy you cant keep out of the game if your goal is winning. His July will be most fruitful so stay with us.