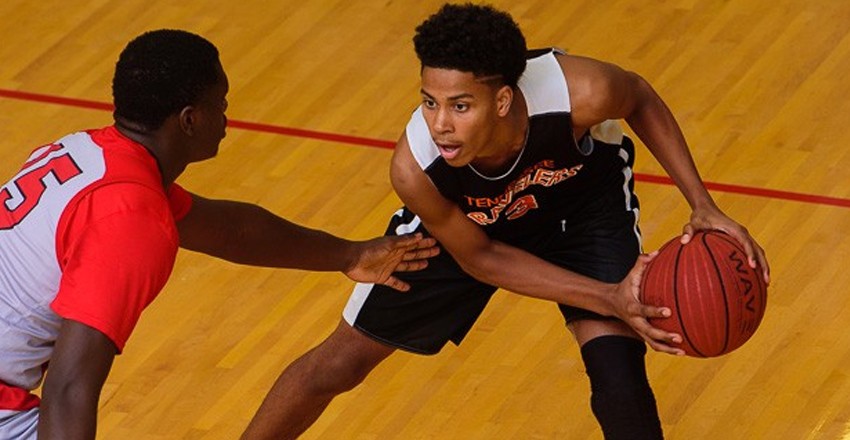 One in the books and another on the way.

Tournament time in Tennessee is always a blast.

Let's read all about it.

BRENTWOOD ACADEMY RUNS AWAY WITH THE 'SHIP IN DII

Defending your championship is hard, going back to back is even harder, so a 3-peat is a thing of beauty. Brentwood Academy put the word out that this trophy belongs to them with a 74-42 triumph over McCallie capturing the DII/Class AA State Championship for the third consecutive season.

Darius Garland (Brentwood Academy) was at his best in the finals dropping 30 points and sauntering away with the MVP hardware. The Eagles were outstanding defensively holding McCallie guard Jr. Clay to 11 points after watching him explode for 34 in the semi-final victory over MBA.

Garland continues to reap in the accolades as he accepts his Mr. Basketball award for the second consecutive season.

In the DII/Class A state title game, Lausanne used 22 points from up and coming sophomore wing Schuyler Forrest lifting the Lynx to the 65-54 win over FRA. Forrest was named tournament MVP while Chase Hayden (St. George's) was selected as Mr. Basketball.

Last week we projected who might make the trip to the Glass House at the Murphy Center in the 'boro. Now we know.

In Class AAA the field is set:

Class AA features some old favorites and some new candidates

Macon County returns to state after a 46-year absence, Seth Carlisle is one to watch

Memphis Sheffield is here to spoil the party, best unknown player in the field is Kavion Hancock

Haywood led by the best unsigned 2017 player in the state, Tristan Jarrett returns this year

Class A seems like a two-horse race....or is it?

Humboldt has held the top spot in the Class A state rankings all season, no reason for that to change

Loretto shocks the world and grabs a spot in the state, they deserve to be here

HERES 10 YOU PROBABLY DONT KNOW ABOUT....BUT YOU WILL

With the state tournament tipping off next week, Wednesday at the Murphy Center on the campus of MTSU, I thought it appropriate to ingratiate you to some of the guys you may not know about coming to the tournament this year.

Slick young point guard with vision and an old school soul. He has several D1 offers and is a must see if you make your way to state this year.

This big young fellow has a major upside, his size (6'7) and motor alone make him a must see and his Class of 2019 status make him a must follow if you're employed as a coach on the high major D1 level.

He may not get the praise of some of his larger profiled teammates but this kid is a gamer, a scorer, a winner. He will lead you in scoring, if you're on the DII, NAIA, Prep School level you must check him out.

The top remaining unsigned Class of 2017 player in the state. Jarrett is a scoring factory, he uses his big body and girth to get in the lane and score regardless of defender size or skill, seek him out it will be worth it

We love players at every level and this tough guy can play college basketball. Slick shooter, tough kid, makes plays and could be a DIII All-American without a doubt.

Diminutive but only in stature, this kid is pure heart and guts. He only stands about 5'8 but he shoots the ball very well, slick pull-up from a dead stop, he handles and gets after you on defense.

Rising junior big man has really come into his own this season. He is rebounding at a respectable clip and has learned to finish around the basket, he blocks shots and when his hands improve he could be exceptional

Smooth lefty operator, he seems to glide while production is piling up all around him. He can shoot the outside shot, his size (6'5) allows him the space to penetrate and when he finally gets it....look out

Sleek wing can shoot the outside shot and is steadily improving on the defensive side of the ball. Has played outstanding in his previous state tournament appearances, big test in the opening rounds

Junior go getter, kind of plays in the shadow of more hyped classmates, Alex Lomas and Tyler Harris, but this cat can go. Unselfish, he scores when the time is right, he defends and he distributes and his team is here.

HOW BOUT 10 MORE TO ADD TO YOUR NOTEBOOK

Memphis East is the obvious favorite and a second round clash against Oak Ridge looms on the horizon. Could they meet Southwind in the championship game?

How about a second round battle between Knoxville Catholic and White's Creek? Haywood and Brainerd will be epic.

All roads lead to Humboldt vs. Mitchell in the finals, but sports fans that's why they play the games.

Good luck to everyone and I will see you in the 'boro.